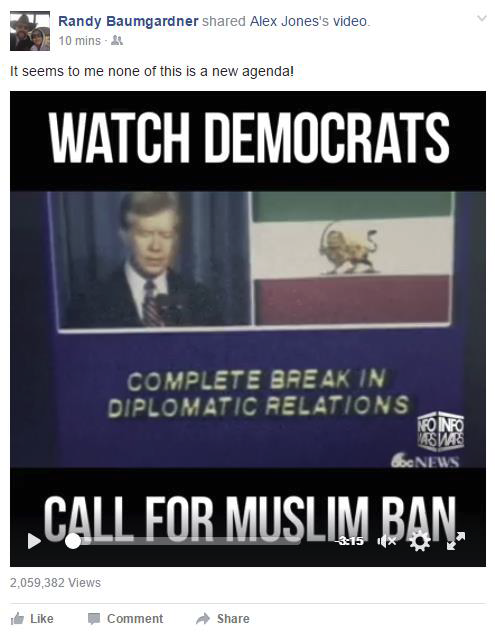 Carter is shown halting visas from Iran in response to the hostage crisis. Clinton and Obama both call for increased border security and the prosecution of illegal immigrants. The video cuts in shots of Trump’s most entertaining facial expressions.

The video seeks to justify Trump’s executive orders on immigration. The orders increase ICE by 10,000 personnel as well as implemeng sweeping raids to find and deport undocumented Americans without due process. Trump also placed an immigration ban on seven Muslim majority countries, which excludes the Christians and Jews in those countries.

The video does provide good evidence that past presidents have had things to say about immigration, but it misses several key parts.

Carter did place a visa ban on Iran similar to Trump’s Muslim ban. However it was in response to a specific case, namely, the holding of 60 Americans hostage in the American embassy in Tehran. While the victims of the Bowling Green massacre may be crying for justice, it seems prudent to limit policy decisions to non-fictionalized events.

The Trump Administration has also stepped up what is known as “expedited removal” which means detention and deportation without going through court proceedings, something the Obama Administration never did.

Rep. Baumgardner needs a reminder that not everything you find on the internet is true, no matter how well edited it is. As an elected official he has a duty to be more selective with the ideas he is sharing, especially when they are ruining the lives of thousands of good people.