It’s tough to say who has it worst among the victims in Trump’s America, but in terms of brazen, unapologetic bigotry, it’s safe to say Muslims have the biggest target on their backs now. It’s awful and sad and ugly, and it pisses me off.

So it was great to see thousands of people in Denver’s Civic Center Park Saturday afternoon for a “Protect Our Muslim Neighbors Rally.”

As usual, the signs at the rally sum up it up as well as anything.

Here’s what was written on some of them: 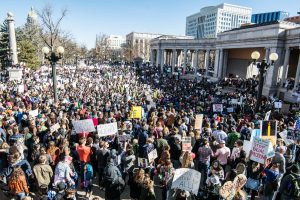 I found myself hoping that the conservative bigots on  talk radio shows, saw the signs, but then I realized, who cares?

We all know those bigots and other Muslim haters don’t represent America. We’re better than that.

That’s why we were in Civic Center Park. So everyone knows our country is better than the bigots, including Trump, who are attacking Muslims–and so everyone knows that, yes, we will protect our Muslim neighbors.