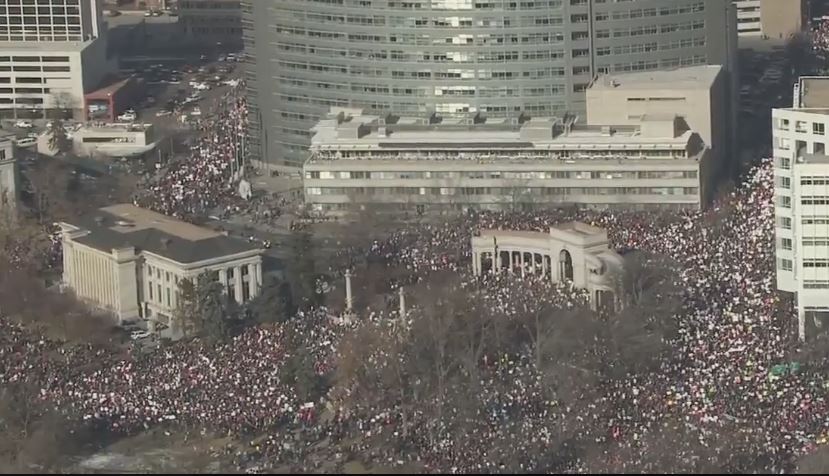 Weaving my way through the, reportedly, 200,000 strong crowds at Denver’s civic center, it is hard to deny that Saturday’s Women’s March was a huge success. A couple things stood out to me. So many signs read, “I’m so mad I made my first protest sign” or something to that effect.

I heard that sentiment echoed from far more people, not even carrying signs. While it’s great that so many first timers came out to make their voices heard, it increases the risk that in a couple weeks or a month, only the few veteran activists will be left on the streets, and all the liberal soccer moms will go back to their daily lives, content that they have done their part.

If this happens, we progressives have little chance of making an impact on the new administration’s policy. As is evident to anyone who follows this publication’s post regularly the other side has little sympathy, if not outright derision, for progressive activists. What made Saturday so impactful was the voices of so many that would normally be squeamish about marching or acts of civil disobedience who did just those things.

It is imperative to keep the momentum of the Woman’s March going throughout the coming months, and even years, until we are assured of real change. Robert Reich, among others, have released a Rooseveltian-style ‘100 days of resistance’ agenda.

Here, I will offer a Colorado specific agenda of resistance so we can all get involved (and get all your slightly left, or right, of center but trump hating friends involved) where we can make the most difference.

www.womansmarch.com calls for the first 10 days to be spent emailing, calling, and sending post cards to your state representatives. The website has printable postcards as well as a search function to find your congressional representatives.

SURJ (Showing Up for Racial Justice) Denver has outlined a number of events occurring in the next 10 days. You can find a full timeline here. Highlighted are a couple of community meetings concerning the Denver Police Department’s use of force. As well as a networking event hosted by a coalition of non-profits.

This march not only provides another opportunity to take to the streets in direct resistance to Trump’s administration. It has a pointed message that Donald Trump must release his tax returns. The event is scheduled for tax day to drive the message home. This march will be in solidarity with marches across the country. Colorado deserves a president who is transparent and accountable to the public, we will use April 15 to show Trump that.

The People’s Climate March is a national event in response to Trump’s obvious disregard for the reality and global threat of climate change.  One would be hard pressed to find a people that takes advantage of their natural resources or engages and cares more about nature than Coloradoans. The event which was created only a few days ago already has nearly 2,000 people indicating that they will be going. Find the Facebook event with more details here.

It is vital that Colorado become a sanctuary state for undocumented Americans and refugees whose safety and livelihoods are now threatened by the Trump administration. We can take steps to ensure Colorado’s status as a sanctuary state by contacting Gov. Hickenlooper and letting him know that Coloradoans care about the safety of all Americans, not just those who were fortunate enough to be born here. Call the governor’s office at (303) 866-2471.