U.S. Attorney General Sessions To Speak in Colorado Next Month

You might remember State Senator Ray Scott (R-Grand Junction) from the many dumb things he says and false claims he makes.  I don’t use the word “dumb” recklessly here. Normally I prefer “ignorant” because people might not know better, but in this case I think it fits.

One example of Scott’s obliviousness came last year when he wrote this incredible line in a blog post:

You see, the problem with Colorado’s economy (which is booming) is that energy prices are both too high and too low. Even though oil and gas is too cheap, and this is “weighing on economic activity,” the “war on affordable energy” (apparently not being fought very well) is killing the economy because it’s driving up energy prices.

These conflicting ideas, presented in two sentences that follow one another, apparently don’t cause any dissonance in the mind of Scott, who seems to regurgitate talking points with little to no interest in their meaning. 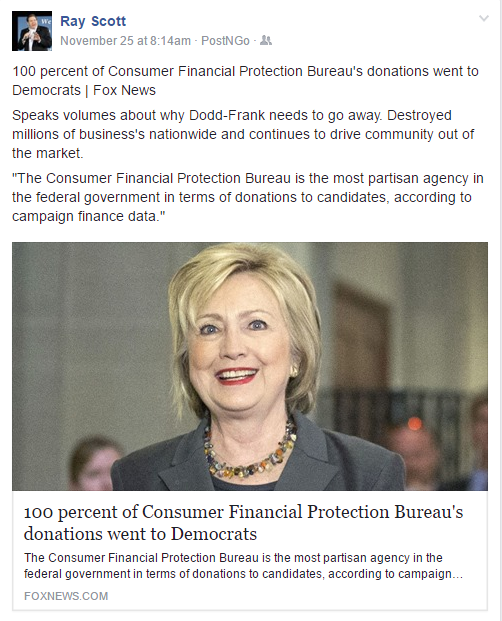 First of all, I’m not sure why pointing out that only Democrats are in favor of offering consumers protection is presented as an attack. Perhaps it’s just Scott’s natural inclination to favor business profits over consumers in all matters that drives his strange and contradictory ideological dogma, but I digress.

What I find amazing here is the claim that “millions” of jobs have been lost due to Dodd-Frank. I went looking for some sort of evidence to fact-check the claim but wasn’t able to identify a source.  I then went to the General Accounting Office website (they’re the agency that provides economic analysis for the US Congress) and found that not only is there no mention of the Act “killing” businesses, it’s not even having a negative effect on the institutions it is designed to regulate: banks. Fears that it would drive community banks out of business are turning out to be unfounded according to the Wall Street Journal and in many cases increased liquidity is making them stronger and community bank profits are up.

With all the talk of truth not mattering anymore in the age of President Trump, I suppose a state senator who regularly makes stuff up isn’t such a surprise.  Perhaps telling the truth isn’t really a standard people hold politicians to anymore.

This is important because if our politics become totally unwedded to objective facts, we are headed for disaster (if we haven’t already arrived), and the fact that truth-averse politicians like Ray Scott go unchallenged when they make stuff up is a canary in the coal mine of our Democracy.