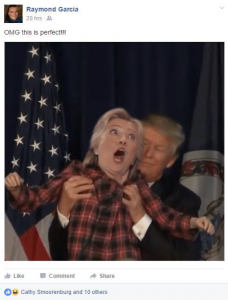 We all know politics is fertile ground for jokes and insults. That’s what we do, like it or not.

It’s hard to say what jokes or insults are appropriate for a political candidate to make, especially now that we’ve experienced Trump. Voters ultimately decide.

But it’s clear that Colorado Republican state house candidate Raymond Garcia has crossed a line by sharing and commenting on the Facebook meme below, which I obtained from a source.

Just because Garcia, who’s challenging State Rep. Susan Lontine in House District 1, has been called out previously for extreme Facebook posts does not mean he should be ignored by reporters. Hence this blog post.