Something that fascinates me is the “telephone” game played by conservative publications. The article (below) posted by Saguache County GOP Chair Richard Drake illustrates the phenomenon.

The headline reads “Hillary Clinton to 4-H Kids: “What the F*** Did I Come Here for?”  When you click on the article it is clear that it isn’t a primary source for the claim, so I clicked on a link within the article that seemed like the source of the claim, only to find out that that article pointed to yet another article as the source of the claim. With each passing article, the claim gets more outrageous and is made with more self-assurance and less interest in veracity.

So I went through four clicks before getting to the “source” of the information, and then I find out that it’s both totally different than the claim in the headline, and comes from an anonymous source. Not only that, it’s from 16 years ago when Clinton was running for the U.S. Senate, and there is no witness or anyone on the record testifying to the veracity of the claim.

But that doesn’t stop ol’ Richard Drake from believing it, posting it, and adding his own two-cents, saying it is “Typical of the nasty woman.” 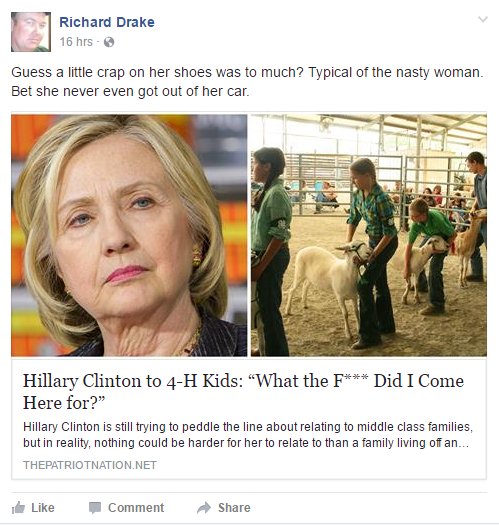