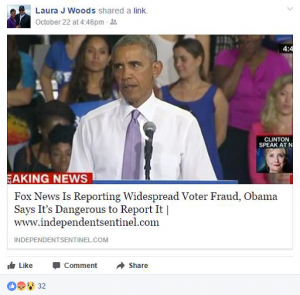 John Sampson, a former Republican state senate candidate who resigned this month from his position as Adams County GOP vice chair, agrees with Donald Trump that Democrats and others in the United States “rig elections and engage in systemic and widespread voter and election fraud.”

During her introduction of Trump during a campaign stop in Golden Saturday, Woods said Democrats are trying to rig the election.

Woods: “Hillary Clinton and her team are scheming to steal this election,” said Woods, without citing any evidence, “while we are citizens who believe in a fair political process, and we want our votes to count.”

Woods, who’s battling Democrat Rachel Zenzinger in a key Arvada/Westminster legislative race, said Trump will “lead our country to greatness once again” Woods has stood firmly behind Trump throughout the ups and downs of the mogul’s campaign, saying she’ll likely lose of Trump loses her district.

When he took the stage after Woods, Trump warned Colorado’s election officials, including its county clerks, who run the state’s elections and are mostly Republicans, that they’re being monitored.

““We have a lot of people watching you people that collect the ballots,” said Trump, as quoted in The Denver Post, adding he has “real problems” with Colorado’s mail-in ballot process.

In the wake of Trump’s repeated accusations about rigged elections, multiple media outlets have concluded, based on previous exhaustive studies, that voter fraud is a non-issue in the U.S., incluidng, of course, Colorado.

Asked if his concerns about election fraud extend to Adams County, Sampson told me Friday he doesn’t think Stan Martin, the Republican County Clerk and Recorder there, is perpetrating fraud.

Still, Sampson says there a “potential for fraud” due to problems with mail-in ballots, Diebold voting machines, and ineligible voters.

Another early Trump Supporter in Colorado, congressional candidate George Athanasopoulous, has been outspoken about his concern about voter fraud, echoing the allegations from Trump and Woods.

Sampson on Facebook: When Donald Trump refused to answer Chris Wallace’s question as to whether or not he would accept the results of the election, Clinton, the DNC, and the usual list of suspects (an appropriate description if there was ever one), went apoplectic.

Really? Are you sure? If so, then can someone please tell me why the Democrats, Clinton, and the usual list of suspects (again, appropriate), feel the need to rig elections and engage in systemic and widespread voter and election fraud?

I mean, if they truly accepted the will of the people, accepted THEIR votes, then there would be no need to rig elections now, would there? But that is the problem. The DNC, Democrats, Clinton, and the usual list of suspects are abject hypocrites.

They rig elections and engage in systemic and widespread voter and election fraud because they DON’T, repeat DON’T, trust the American voter and don’t think the American voter will vote for them simply based on their positions on the issues. In short, they do not, will not, and never will, accept the will of the American voter nor will they honor the “Everyday American’s” decision. For they believe the great unwashed are too stupid to be trusted.

It’s simply a matter of trust. We’re not trusted, nor respected by The Clintons, The Democrats, The DNC, and The Usual List of Suspects (which includes Wall Street, The Media, Hollywood, and the Pollsters).They arrogantly believe they are “Oh So Superior” to us and we are simply backward children that need to be taken care of.

Donald Trump hit the nail right on the head when he said the system is rigged. It has been for decades. We’re just finally waking up to that fact. I just hope we didn’t wake up too late and didn’t hit the snooze button one too many times.