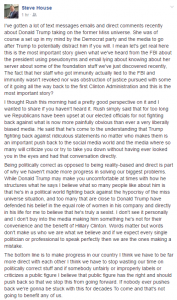 Colorado Republican Party Chair Steve House wrote on Facebook this week that the “media” worked with Democrats to “set up” former Miss Universe Alicia Machado to go after Trump.

House: I’ve gotten a lot of text messages, emails and direct comments about Donald Trump taking on the former Miss universe. She was of course set up in my mind by the Democratic party and the media to go after Trump to potentially distract him, if you will.

When are Republicans going to stop blaming the media for their self-inflicted wounds? I mean, shortly after the debate, Trump called Machado “disgusting” and accused her of having a “sex tape,” whatever that means. Was Trump’s late-night outburst set up by the media as well?

(FYI, KNUS host Craig Silverman claimed to have watched the forementioned sex tape, which does not exist.)

It’s true that Machado was a Clinton media surrogate before Clinton brought her up in a debate. And it looked as if Clinton communications folks had told some journalists that the Machado info was coming.

But of course a campaign is going to leak info to reporters, cooperating with them if you will, but House’s post implies journalists were willfully working with reporters to distract Trump, as if they wouldn’t have done the same to Hillary. That’s not supportable.

If Republicans are blaming the media now, you can only imagine what they’ll be saying after Election Day. You recall how Gardner blamed the media for the 2012 GOP election loss:

Who knows what the GOP will say this year?
Original Publication