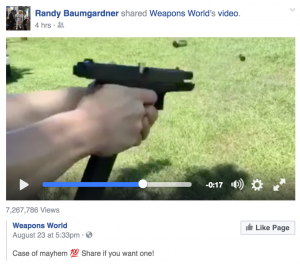 er has apparently removed a video, which he’d shared on his Facebook page, showing a man frantically firing weapons (apparently a sawed-off shotgun and fully automatic rifles and pistols) that are shady or, at worst, illegal under federal and state laws).

Banned high capacity magaizes are also shown in the video, which you can see here.

Baumgardner is glorifying some of the weapons and magazines used in the two worst gun massacres in Colorado history.

Maybe this occurred to him, because Baumgardner apparently removed the video, called a “Case of Mayhem,” sometime after he shared it over the weekend.

A call to Baumbgardner’s office confirming that he shared the video and seeking his reason for posting it, and an explanation for why it was taken down, was not immediately returned.

The Moffat County Republican, whose Twitter handle is CapitalCowboy, is part of GOP State Senate leadership.

Correction: a previous version mischaracterized ownership of some regulated guns as legal only using loopholes.