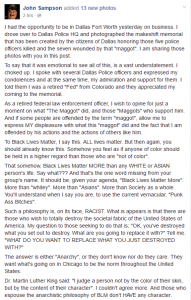 In a Facebook post Wednesday, Adams County Republican chair John Sampson called Black Lives Matter “Punk Ass Bitches,” but in an interview the next day, he said he was only referring to those “who assault us, who burn, who loot, or who destroy property, because they’re having a temper tantrum.”

To Black Lives Matter, I say this. ALL lives matter. But then again, you should already know this. Somehow you feel as if anyone of color should be held in a higher regard than those who are “not of color”.

To the “Punk Ass Bitches”, you will not destroy us. You WILL, however, destroy yourselves. with a little help from the rest of us. You are either WITH us, or AGAINST us.

But Sampson said emphatically that he did not mean to disparage all Black Lives Matter protesters, whose right to protest he respects.

“The punk-ass bitches are the ones demanding that we destroy society without having any idea of how to resolve the problem and what to replace it with,” he said. “They are out there simply to destroy it, simply for the sake of destroying it. Those are the punk-ass bitches.”

Adams County is widely regarded as a critical battleground in November’s election.