Anti-Mask Posts on Facebook Pages for the Sake of Debate, Not as Official Position, Say Two Colo GOP Groups 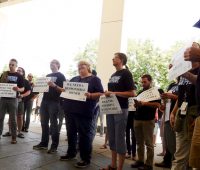 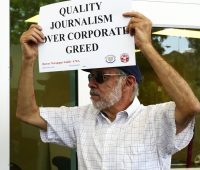 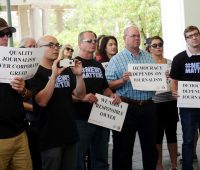 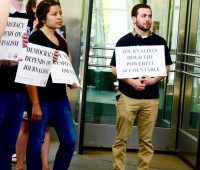 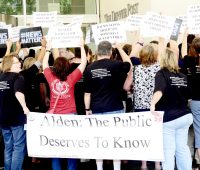 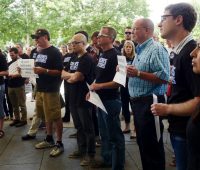 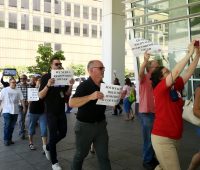 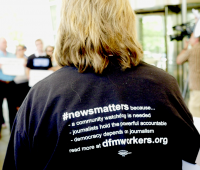 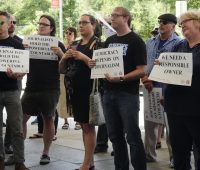 Scores of journalists and concerned citizens gathered in front of the Denver Post building today to protest staff cuts orchestrated by New York hedge fund Alden Global Capital. Current and former Denver Post workers vocalized their concerns on a variety of subjects, including the widespread impact that diminishing news coverage has on the local community and on democracy as a whole.

The rally comes a day after the June 16th deadline for 26 newsroom staff to voluntarily separate from the company. Journalists were given 7 weeks notice of the buyout offer. It is unclear how many journalists ultimately took the offer, and if any layoffs will ensue in the coming days.

The prevailing message of the rally was “News Matters” which was exhibited by numerous speeches, posters, and t-shirts at the event. Denver Post staff writer and Denver Newspaper Guild unit chair, Kieran Nicholson, explained, “As the number of journalists dwindle, coverage dwindles, which hurts our communities.” He called on the the paper’s owner, Alden Global Capital, to not seek further layoffs and instead to “give us the people and tools we need to serve our communities, our readers, and our neighbors.”

Denver City Councilman Kevin Flynn recalled how the paper has changed over the past several years, citing that since his time at Rocky Mountain News, coverage of City Hall has been greatly reduced. He explained that “when we no longer have press covering the local issues, we no longer have an informed electorate.”

Lakewood City Councilman and former Rocky Mountain News journalist Charlie Able, also expressed his concerns regarding the disappearing Denver Post staff. He explained that of all the years he covered Lakewood as a journalist, he never felt like he could get a straight story. Now that he is a Lakewood City Councilman himself he said, “I have a straight story but there’s nobody to tell it to.”