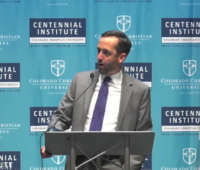 One day after the U.S. House passed the Respect for Marriage Act (H.R. 8404) on July 19 with support from 47 Republican federal lawmakers, Jeff Hunt,, the director of Colorado Christian University’s Centennial Institute and chairman of the Western Conservative Summit, announced on a local talk radio show the launching of a petition effort to pressure Colorado’s two U.S. Senators to vote against the bill which seeks to codify federal protections for same-sex and interracial marriages.