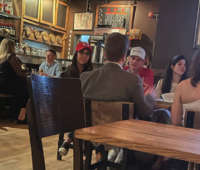 U.S. Rep Lauren Boebert (R-Colo.) was spotted at a popular DC bar last Friday night. In a city lacking movie stars or musicians, Members of Congress are celebrities. Among those elected officials, the Congresswoman from the Western Slope is unquestionably one of the most recognizable, which is why someone sent a candid shot of her to Politico Playbook for its “Spotted” section. In the photo, Boebert can be seen sitting at the end of a long table speaking to a man wearing a suit. At least six other people are also visible in her party.