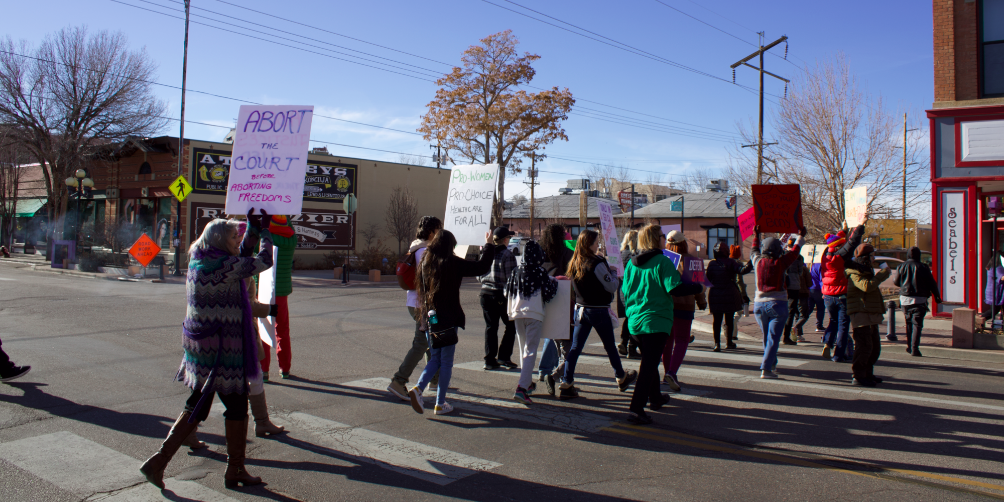 Last year Roe was overturned by the Court’s ruling in Dobbs v. Jackson Women’s Health Organization, which means that abortion access is now regulated at the state level, creating difficulties for patients and abortion providers who are forced to navigate a patchwork landscape of state laws and regulations. Colorado moved to legalize abortion and enshrine abortion access under law with last year’s Reproductive Health Equity Act (RHEA), but other states, like Oklahoma and Texas, have enacted strict bans on abortion, forcing patients to turn to states like Colorado for care. Despite Colorado’s broad protections for abortion and Democratic supermajority in the state government, activists on both sides of the abortion issue see a need for continued advocacy.

March for Abolition
Approximately 50 people gathered across the street from Denver’s Planned Parenthood on Saturday morning for Colorado Right to Life’s (CRTL) “March for Abolition.” Will Duffy, CRTL’s president, addressed the crowd from a flatbed trailer bedecked with signs featuring gruesome imagery, African slaves, and references to “child sacrifice.” CRTL advocates for a complete ban on abortion, with no exceptions for rape or incest.

“Let us not ever forget that abortion is the intentional killing of an innocent little boy or little girl,” said Duffy. “That’s also known as murder. Abortion is murder.”

Nearly 15 minutes into his remarks, after comparing abortion to the Holocaust and accusing Planned Parenthood CEO Alexis McGill Johnson of child abuse, Duffy was interrupted by a contingent of protesters from the Denver Communists, chanting, blowing whistles, and carrying a large banner that read “Defend abortion, believe survivors.” The Communists’ noise demo had the desired effect. Duffy’s speech was curtailed, and instead of marching and waving signs on Quebec Street, the gathered anti-abortion activists mingled with the Communists, arguing about abortion, Christianity, and capitalism, among other topics, for the next hour and a half.

“It’s been very interesting to see that these guys are walking around with whistles and megaphones,” said Dominic Enyart, a spokesperson for CRTL. “Whenever there’s someone trying to start a dialogue — like I was just trying to talk to a few people over there and they were blowing whistles in my ears and not letting anybody talk. It’s really interesting that it seems that people are afraid of opposing ideas, and that tends to be something you do when you are wrong about something is yell, ‘Shut up. I don’t want to hear what you have to say.’ It seems like that’s what some of these guys are doing, whereas the pro-lifers over here are just trying to have civil discourse.”

“We’re not going to waste time,”  said Mark, who got into an argument with some of the Communists over his use of the ladder. “It’s a position of ignorance, if you think anything else. Really the debate is how we value human life, how we value all human life. We just happen to value all human life from conception on. Most of us are Christians, and so Jesus says to love our neighbor as ourselves. We include the pre-born child as our neighbor because he’s a human being. We value all human life based on that. They’re all made in God’s image, so every human being is made the image of God, and we’re called to love every human being as ourselves the best we can. So we’re trying to, today, to try to reach women, to persuade them not to kill their children. … We put the ladders up so we can actually communicate with the women from their car to the door. We have very little time, but it allows us to be able to communicate with them.”

For Monica Hughes, the Pueblo organizer for abortion advocacy group Cobalt, this kind of behavior has a negative impact on both abortion patients and providers.

“We had a Planned Parenthood here in Pueblo that was shut down when I was still in high school,” she said. “They didn’t do abortions there, but they did STI checks, basic health care. They were run out by the [anti-abortion activists] in this town. So we don’t have a Planned Parenthood anymore. Stigma kills and they’re harassing people outside of an abortion clinic and peeking over to violate people’s privacy. It’s not safe, and it doesn’t help people get access to the health care that they need. They are very divisive, they are very disruptive, but we are going to continue fighting the good fight.”

James Radek, an organizer with the Denver Communists, explained their tactics. “The goal is not to reason with these backward people, but to build our own forces and demonstrate to other people that may agree with us that there are people out there that share their beliefs and share their desire to confront the far-right,” he said. “These are the radical fringe. They don’t believe in abortion, even in cases of rape and incest, but, yes, we do. We don’t think that any of our issues can be handled solely in the legislature — or at all in the legislature a lot of times. The Democrats and Planned Parenthood themselves have pursued and recommended a strategy of non-confrontation and just focusing on electing the right people and lobbying and that kind of thing. That’s what got Roe overturned, that type of non-confrontational strategy, so, yeah, we reject that.”

Republicans at the state and national level remain committed to banning and/or restricting abortion access. “I truly believe that most Coloradans do not support abortion after the first trimester, but that’s the agenda that they want to put forth,” said newly-elected Rep. Brandi Bradley (R-Littleton), who delivered an emotional anti-abortion speech at the Capitol on Friday, in honor of the anti-abortion event March For Life.

In Washington D.C., Rep. Lauren Boebert (R-CO) introduced on Friday legislation that would prohibit federal tax dollars from going to Planned Parenthood and that redirects $235 million to community health centers, according to a news release.

“The nation’s largest abortion provider has no business receiving taxpayer dollars,” said Boebert in the release. “Planned Parenthood claims these funds go to healthcare for women, but last year, Planned Parenthood performed a record number of abortions while also reducing the number of well-woman exams and breast cancer screenings it performed. Instead of funding Planned Parenthood, my bill will redirect this funding to community health centers that actually meet the health needs of women across the country.”

Outgoing Colorado GOP Chair Kristi Burton Brown described Boebert’s legislation as “an effort that has consistently been going of people who believe the nation’s biggest abortion giant should not be getting any taxpayer dollars to lie to women and abort children,” during a segment as guest host for the Dan Caplis Show on Friday. Boebert, an outspoken anti-abortion advocate, last month introduced legislation to prohibit abortions for immigrants.

Bigger than Roe
On Sunday, abortion advocates Cobalt and Pueblo Pro-Choice organized the “Bigger than Roe March.” Approximately 75 pro-abortion activists carried signs and chanted through downtown Pueblo before taking part in an after party and fundraising event at the Blo Back Gallery.

“Today is the National Women’s March,” explained Hughes. “There’s a movement across the nation to get people together, to rally, to celebrate women and the progression of women, but also to prove that this would have been the 50 year anniversary of Roe v Wade had it not been overturned. Our movement is so much more than that. It’s not just about abortion rights, and it’s not just about progressing women. There’s so much to our movement and we’re growing and we’re getting bigger, and we’re here to show people that it’s an everyone issue, not just a women’s issue.”

With the Dobbs decision, Cobalt’s Abortion Fund has faced an unprecedented demand, with procedure funding and number of clients showing a marked increase in 2022, compared to 2021.

For the organizers with Pueblo Pro-Choice, Sunday’s event was also a celebration of the defeat of a recently proposed municipal anti-abortion ordinance. “There are no restrictions here in Colorado, but recently here in Pueblo, we we had a city councilor come and introduce an ordinance that was brought to her by the anti-choice community,” explained Sydney Haney of Pueblo Pro-Choice. “It would have restricted — to be clear — the access of tools. It would have made it really difficult for the hospitals, any clinics, anybody who provides reproductive health care, to access the tools they would have needed if someone wanted to continue a pregnancy or end a pregnancy. We learned about this and that’s when we saw this group really kind of flourish. Yes, obviously, Colorado and Pueblo is a pro-choice state, so it’s something we really didn’t want to see happen. Our event today kind of is just a party for us. It’s for the for getting the city councilors to shut it down.”

Pueblo Mayor Nick Gradisar, who voiced his opposition to the proposed measure, took part in the march. “I’m a big supporter of women’s reproductive health rights,” he said. With what’s been happening in the city, I thought it was important to be here. … I told the city council earlier, as did the city attorney, that there was nothing the city could do with respect to trying to keep [the CARE Clinic] from opening. They just required a business license. The zoning for that clinic was proper, so there wasn’t any rezoning that had to be done or anything like that. But obviously it got into a partisan kind of situation where people were wanting to advance that agenda, whether it’s legal or not.”

Sen. Nick Hinrichsen (D-Pueblo) also attended the march. “I think it’s an important community event,” he said. “It should have been the 50th anniversary of a milestone decision on human rights in America. As the bitter result of what happened last summer, I think it’s important to show solidarity and to show that the attitudes of the people are not moving back, even if the attitude of the court is.”