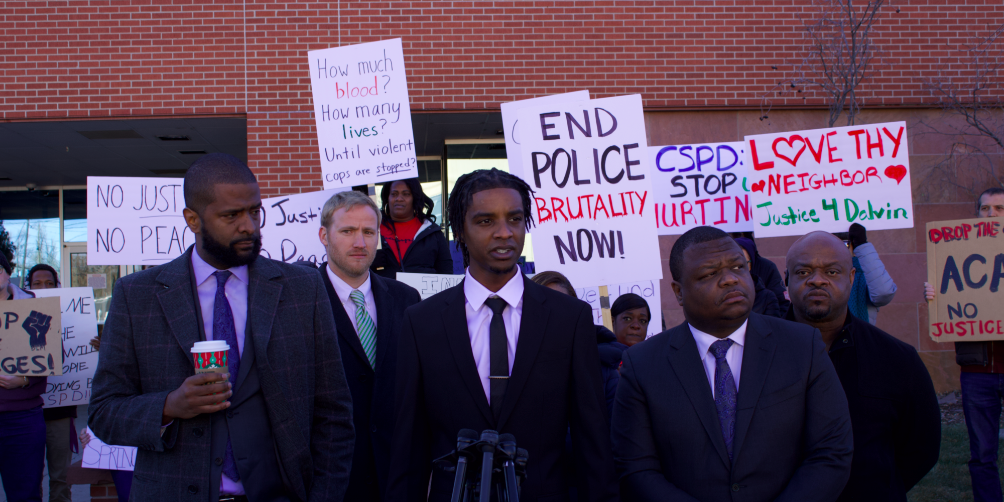 Attorneys representing Dalvin Gadson announced a federal lawsuit against three Colorado Springs Police Officers, stemming from an Oct. 9 arrest in which Gadson sustained a black eye, back injuries, chest wall contusions, an abrasion to the right side of his back, and a closed head injury. Officers Colby Hickman, Matthew Anderson, and Christopher Hummel were named as defendants in the suit, in their individual capacity.

“The complaint was filed citing excessive force, use of excessive force against Mr. Dalvin Gadson,” said attorney Harry Daniels during yesterday’s press conference. “Make no mistake about it, this is a case that needs to be publicized. Why? This has happened so many times here in America, across the country, and we are sick and tired of it. This is the first step that we’ve taken here, on behalf of Mr. Gadson, to seek justice. What does justice look like? Justice is not about filing a lawsuit. Justice is about removing bad apples from the streets because removing bad apples protects the citizens of Colorado Springs. It’s not just about one case. There’s multiple cases here in Colorado Springs. You have the case with Mr. De’Von Bailey being shot in the back, the 17 year-old young girl who was placed inside a squad car, pepper-sprayed, and locked inside essentially a gas chamber.”

The Colorado Springs Police Department has settled a number of lawsuits alleging excessive force stemming from the June, 2020 protests following the murder of George Floyd by former Minneapolis Police Officer Derek Chauvin. In September, the Colorado Springs City Council approved a settlement of at least $100,000 to Tara Hadam, after CSPD officers “repeatedly sprayed her directly in the face with extremely painful noxious chemical sprays” while “Ms. Hadam stood with her hands held high in the air in front of a line of CSPD officers in full riot gear” during a June 2, 2020 protest, according to her civil complaint.

In February, Colorado Springs agreed to pay $175,000 to Celia Palmer, who was ambushed, tackled, and slammed to the ground by officers shortly after the incident involving Hadam. One of the officers named in Palmer’s lawsuit, Keith Wrede, was disciplined for commenting “kill ‘em all” on a Facebook livestream during a June. 30, 2020 protest that blocked Interstate 25 in Colorado Springs.

“I don’t think this lawsuit and everything else is about a few bad apples,” said Bakari Sellers, an attorney with Strom Law Firm, political commentator, and a former South Carolina state representative. “I actually think Colorado Springs has a bad orchard. Until you get to the root of the problem and treat everybody with the kind of dignity and respect they deserve, we will be back.”

Gadson, an honorably discharged veteran, “claims severe mental anguish and severe emotional distress” as a result of the arrest. “I’m scared,” he said. “I’m scared of all these police officers at this moment because I feel like they all are in cooperation with those people. Until they are suspended, I will not feel safe in Colorado Springs.”

Sellers noted the conduct of CSPD officer Anderson after the incident. “It’s not that Mr. Gadson was a Black man who was beaten,” said Sellers. “It’s the fact that Mr. Gadson was a Black veteran. You know, this is a community that loves and serves and upholds its veterans, or at least we thought they did, but to see a veteran with your own eyes be pummeled, 20 times be kicked in the head. Look at his injuries after. Then, what got me, was the officer, the young man as he was taking pictures of his hands with the little smile and smirk on his face. The smirk on his face that said, ‘I just beat somebody and I wouldn’t even treat a dog this way.’ If you saw a dog be kicked and beat 20 times, punched 20 times, that person would be brought up on charges in any community around the country. But Mr. Gadson was treated less than that and then he was charged, and he still has to live with those mental and physical wounds. It’s hard being Black in America. I never would have thought I would say it’s hard being a Black veteran in America. So we have some internal work to do.”

Community members were present during the press conference to show their support for Gadson. “I don’t think this is just a few bad apples,” said Jon Christiansen, a local activist and board member of the Chinook Center, an organizing hub in Southeast Colorado Springs. “I think this is systemic within the department. I think that they have problems deep within the department and they never deal with any of the problems, and that’s why these things continue to happen in Colorado Springs Police Department. We thought we’d come out and support them because we know we’ve seen over many years now that this is exactly how CSPD acts.”

Christiansen has had his share of run-ins with CSPD, being arrested while protesting a rally for then-President Donald Trump at The Broadmoor World Arena in February, 2020, and again during a July, 2021 protest. Christiansen and the Chinook Center, as well as other activist groups in Colorado Springs, were also the subject of a long-running CSPD undercover operation that was revealed after Christiansen’s 2021 arrest.

“We just need some real accountability for people’s actions,” said Rep.-elect Stephanie Vigil (D-CO Springs). “It can’t just be the case that an agency that’s ostensibly here for public safety doesn’t hold their own individual actors to account if they’re out of line. And it also can’t be the case that they’re literally never out of line and they’re always justified. There’s got to be a point at which we say that’s not okay, and they’re removed from the force if it’s egregious. Otherwise, you can’t rightly expect citizens to trust the entire agency. How can you?”