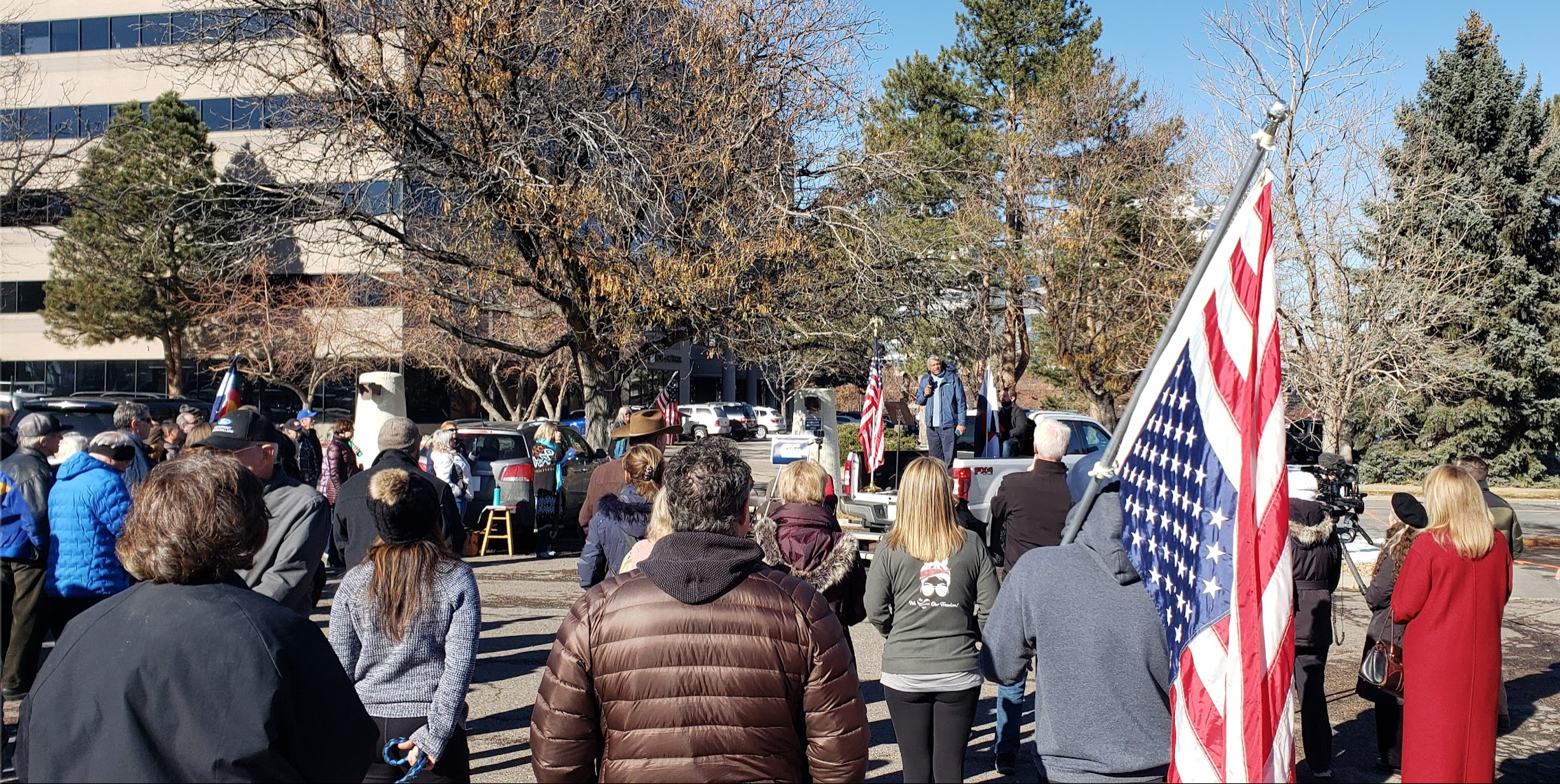 At least 100 angry Republicans gathered in a parking lot outside their state party headquarters in Greenwood Village yesterday, calling for the ousting of Kristi Burton Brown, the leader of Colorado’s Republican Party, and other state party officers. Their plan? Old-fashioned intra-party organizing: flood the local party meetings with MAGA Republicans, push as many as possible into delegate positions, and vote out Brown and the rest of the old guard.

Organizers dubbed this press conference the launch of the “Save Colorado Project.” The two-part plan begins with a takeover of the state GOP by far-right, evangelical election deniers, who then will lead the new MAGA-fied Republican Party to victory in 2024.

In a state where Heidi Ganahl, the statewide candidate closest to their position, lost by 20 points, it’s a stretch.

The speeches varied in tone, but everyone pushed election fraud conspiracies, conservative Christianity, and the same call to action: get in the game by vying for a local precinct leadership role.

Peters, who later told Colorado Politics she was open to running for state chair, stuck to her election conspiracy script. She promoted her movie Selection Code, which rehashes debunked claims of election fraud in both the 2020 election she administered, and the 2021 Grand Junction municipal election that took place after a judge had banned her from any involvement in administering the election.

Peters told the Colorado Times Recorder that while she didn’t organize the event, she supports Save Colorado Project’s goals.

“The people’s voices have not been heard for too long and the leadership has just kind of ignored the voice of the people,” she said. “So I support the people. That’s where I stand. The grassroots of Colorado. are just tired of being dictated to and they’re tired of seeing obvious manipulation in the elections and the GOP not standing up for them and the principles that the GOP stands for.

“I follow what God tells me to do. When I took office, I swore an oath to the Colorado Constitution and to the Constitution of the United States. And as long as I have breath in me, I will continue to fight for this nation.”

The first, Adams GOP’ bonus member Ben Nicholas, opened the event by issuing a “declaration of war” against state party leaders, then repeating conspiracy theories about stolen elections, both by Republicans at the GOP caucus and statewide via “Dominion,” referring to a debunked claim of hacked voting machines.

The second MyColoradoGOP speaker was Anil Mathai, who serves not only as a bonus member but also as the party’s 8th Congressional District (CD8) chairman. He gave the most aggressive speech of the day, beginning with this zinger: “We have a Republican Party that is full of whores!” He later referred to his party’s leaders as “ass-wipes” and bragged that when he served as Adams County GOP chair in 2018, he was the only one out of 64 chairs who “rebuked Cory Gardner and Mike Coffman to their faces for going against our Republican platform.”

This year Mathai presided over his party’s activity in the new Republican-leaning CD8, where Democrat Yadira Caraveo eked out a surprising win over a very experienced GOP opponent state Sen. Barbara Kirkmeyer.

Nearly all of the activist groups represented were born out of either lockdown protests or election fraud conspiracies. They include the Spunky Patriots from El Paso County, the Philips County Election Integrity Project, the Ladies for Liberty, Keep Colorado Free & Open, and many others.

Among the attendees was Taylor Rhodes, executive director of Rocky Mountain Gun Owners, a far-right advocacy group that for nearly three decades has built its political power by attacking establishment Republicans from the right.

Controversial podcaster Joe OItmann, who founded FEC United, a far-right conspiracy group with its own militia, and who chose Kristi Burton Brown to run his organization, now supports replacing her as state GOP chair. In a Facebook post supporting the Save Colorado Project, he used an emoji to call her “trash.”

Lori Cutunilli, the leader of multiple attempts to recall Colorado Gov. Jared Polis and Secretary of State Jena Griswold, both Democrats, also spoke. She recounted that her frustration with insufficiently conservative candidates led her to look at third-party candidates.

“They were far more qualified, far more conservative and definitely had our values more than the people that the Colorado Republican Party put on our ballot,” said Cutunilli. “Well, of course, you can imagine that caused some conversations with people who said, ‘you have to vote straight R or you’re going to split the ticket.’ We did not split the ticket. Our Colorado GOP split our ticket!”

Following the event Cutunilli told the Colorado Times Recorder that another recall attempt against Polis and Griswold is “a possibility,” but state law requires her to wait six months after the election before trying again.

In the meantime, she’s focused on “getting rid of the [voting] machines.”

One of the last speakers of the day, longtime activist and perennial candidate Casper Stockham, focused on the call to action, asking everyone there to get involved.

“There’s enough people in this parking lot to change leadership in the Colorado GOP,” said Stockham. “There’s enough right here. And the way you do it is, you go back to your counties and you become bonus members so that you can vote for the next leadership.”

Asked in an interview with the Colorado Times Recorder following the event if the 100 attendees would be enough to win a vote of the Colorado GOP’s Central Committee’s 500+ voting members, Stockham exuded confidence.

“You get 100 people who are on the same page, those hundred are going to talk to others. We can easily get half the committee swinging in one direction,” said Stockham. “I think that’d be enough to tip over and get someone else.”

The 2022 election showed the widening rift between the so-called grassroots and establishment wings of the Colorado Republican party. Leaders of both factions agree that Cinfighting contributed to the GOP’s historic defeat at the polls. Yet while most of the more moderate Republican pundits are calling for moving past election denialism and Trumpian grievance politics, the “Patriot” wing made it clear yesterday that they aren’t giving up their favorite conspiracy theories anytime soon.