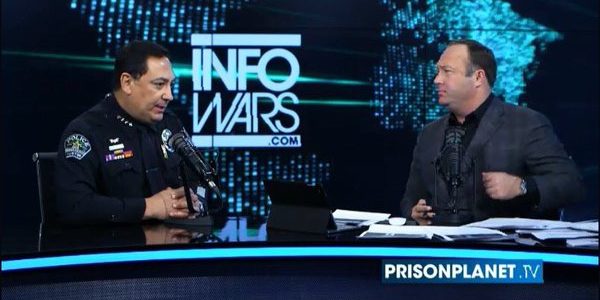 Aurora’s newly appointed interim police chief, Art Acevedo, in addition to recently being fired by the city of Miami, has a history of misconduct and was a frequent guest on InfoWars, founded by conspiracist Alex Jones, who was ordered by a Connecticut court last month to pay hundreds of millions to Sandy Hook families for falsely saying the 2012 school massacre was a hoax.

Acevedo began his career in law enforcement as part of the California Highway Patrol (CHP). In 2004 the Los Angeles Times reported that Acevedo “has been investigated recently for allegedly showing nude photographs of a fellow CHP officer to other high-ranking officers while on duty. Assistant Chief Art Acevedo is the subject of a $5-million civil claim involving the woman with whom he allegedly had an affair in 1995.”

According to the Times, claims filed with three state agencies alleged that Acevedo kept sexually explicit Polaroid photographs of the woman in the glove box of his state-issued car and showed them to other supervisors after the affair ended. Two CHP captains allegedly said Acevedo showed them the pictures, including one in which the woman is performing a sexual act on him. Acevedo denied showing the photos to other officers to the Sacramento Bee.

In 2007, Acevedo was hired as chief of the Austin Police Department. In 2016, the Austin American Statesman reported that Acevedo was “reprimanded, stripped of five days’ pay and warned his job is in jeopardy after his boss said he didn’t follow orders to stop discussing the controversial police shooting of an unarmed teen in February. At the center of the penalty against the chief, City Manager Marc Ott said Acevedo had been insubordinate.”

While serving as the Austin PD chief, Acevedo was a regular guest on Alex Jones’ InfoWars program. In October, Jones was ordered to pay nearly $1 billion in damages to families of victims of the Sandy Hook School shooting, for falsely claiming they were actors who staged the shooting as part of a government plot to seize Americans’ guns. Jones was recently ordered to pay an additional $473 million in punitive damages.

In a since-deleted Feb. 3, 2016 tweet, Acevedo wrote, “It’s always great visiting with [Alex Jones] and [InfoWars]. Thank you for your support of Austin Cops For Charity.”

“Chief Acevedo recognizes that people in any community have a variety of strong viewpoints on issues,” said Ryan Luby, Aurora’s deputy director of communications and marketing, in an emailed statement. “Consequently, he seeks to reach them where they are on nearly every platform to provide critical information and, in some circumstances, to challenge false or skewed narratives, not endorse them. We believe strongly that a media appearance nearly seven years ago does not cloud Chief Acevedo’s 35 years of experience in law enforcement. It is irrelevant to his ability to lead the Aurora Police Department and to continue to implement the types of comprehensive public safety changes he has championed for years.”

According to the Houston Chronicle, “When [Acevedo] left Austin to take over the Houston Police Department in late 2016, Acevedo was staring down a brewing scandal after a state commission found the city’s crime lab was using outdated methods to examine DNA samples.”

In November, 2016, Acevedo was hired as chief of the Houston Police Department. In January, 2019, Houston police executed a no-knock raid and killed two homeowners, Regina Nicholas and Dennis Tuttle. The raid was based on false information that the individuals were heroin dealers. Acevedo initially refused to publicly release an audit of the Houston PD’s narcotics division which “found policy violations due to ‘administrative errors committed by Narcotics case agents and supervisors,’ and found that officers didn’t follow policies related to ‘warrant services, operations planning, and handling of confidential informants,’” according to reporting from the Houston Chronicle.

Acevedo was hired by the Miami Police Department in March, 2021, but then fired in October, after claiming the “Cuban mafia” was running the police department.

On July 11, 2021, Acevedo posed for a photo with Gabriel Garcia, a Miami Proud Boys leader who is facing federal charges after posting video on Facebook of his breach of the U.S. Capitol during the Jan. 6 insurrection. In the photo, provided to the Miami Herald, Garcia is wearing a t-shirt showing the outline of a man aiming a semi-automatic rifle.

Acevedo has been consulting with Aurora Police Department on its consent decree when the city asked if he would apply for the interim position. Aurora PD has come under scrutiny for a number of scandals, including multiple DUIs involving officers, both on- and off-duty, and claims of racist policing and inappropriate use of force. Last year, three Aurora PD officers were arrested for the 2019 death of Elijah McClain.

Editor’s Note: This story has been updated to include a statement from the city of Aurora, additional details about his tenure at Austin PD, and to include a photo of Acevedo with the leader of the Miami Proud Boys.