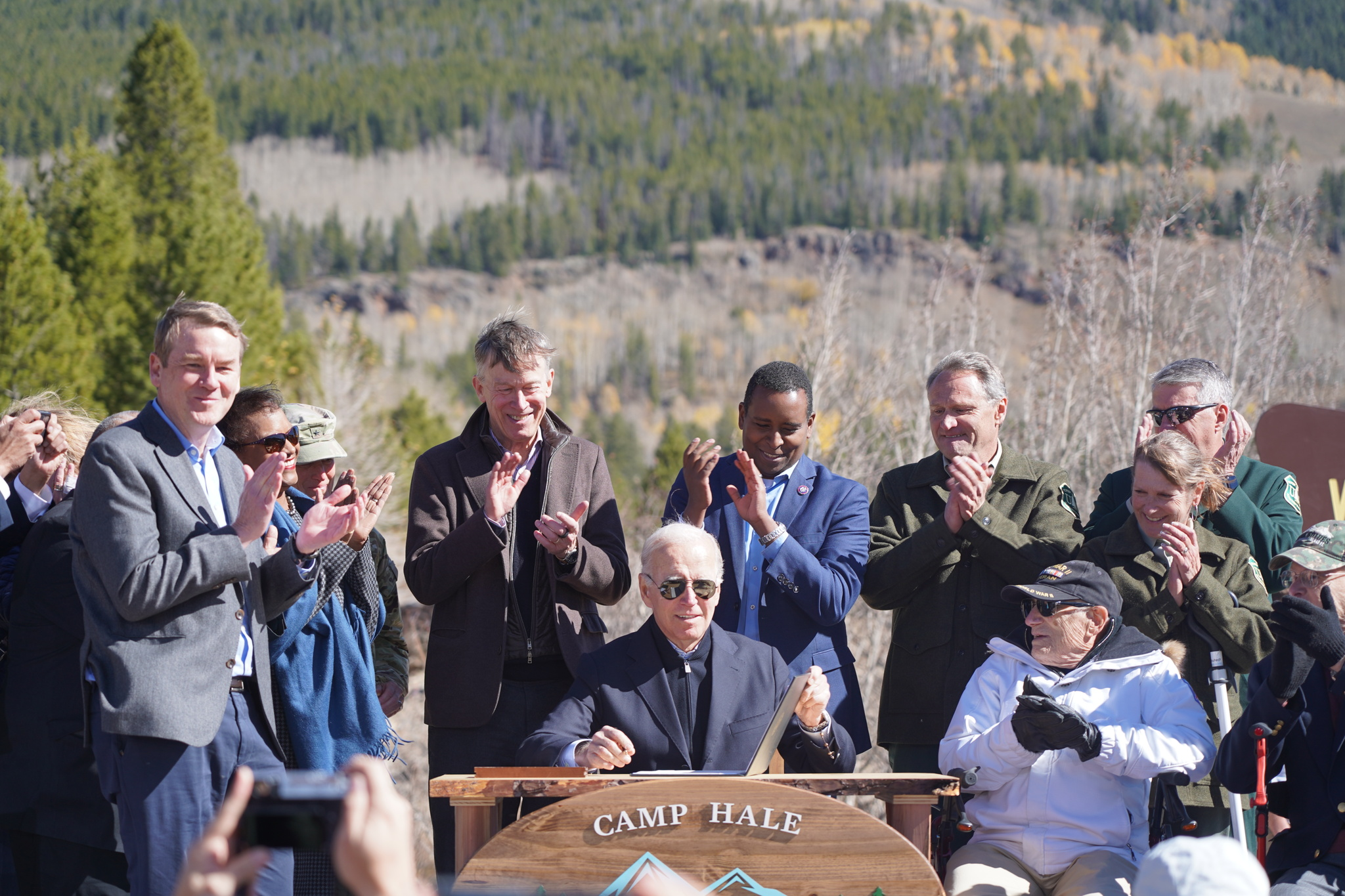 PANDO VALLEY, Colo. – On his way to Wednesday’s signing ceremony to designate the new 53,800-acre Camp Hale-Continental Divide National Monument, President Joe Biden and his motorcade passed over 9,267-foot Battle Mountain Pass, site of a legendary battle between the Ute and Arapaho tribes in 1868. It’s also home to the abandoned mining town of Gilman.

“These treasured lands tell the story of America,” Biden said before signing the first new national monument designation of his administration. “For thousands of years tribal nations have been stewards of this sacred land, hunting game, foraging for medicinal plants and maintaining a deep spiritual bond with the land itself. By the 1800s, mining activity and the federal government drove out indigenous tribes from their homes, but those tribes continue to use these sacred lands.

“Last year, I issued an historic proclamation, officially designating Indigenous Peoples’ Day to honor the contributions of Native Americans to our society and acknowledge the history of violence committed against them,” Biden added. “Two days ago, we observed that day in this nation. Today, I’ll be signing a proclamation to preserve these sacred tribal lands as a national monument.”

Just about 12 miles south of Battle Mountain on U.S. Highway 24, Camp Hale – or “Camp Hell” as its thousands of U.S. Army residents called it during World War II – is famous as the birth of America’s elite mountain ski-trooper unit and the many veterans who trained there, fought and returned from the war to found the nation’s modern ski industry. Camp Hale, hastily built in the Pando Valley in 1942, also has a darker side as a POW camp and CIA training ground. But the Ute tribes used it as a summer and fall hunting ground for thousands of years before that.

“Since time immemorial, the Parianuche and Uncompahgre bands of the Ute people traveled seasonally here to harvest the bounty of the Eagle River valley,” a sign explaining the new monument reads. “This area continues to remain culturally important for the Ute people.”

While it’s the peace of the place now that was celebrated on Wednesday, with surviving 10th Mountain veterans and Colorado politicians from Sens. Michael Bennet and John Hickenlooper to Colorado Gov. Jared Polis and U.S. Rep. Joe Neguse heaping praise on Biden for taking executive conservation action, the warriors who fought crucial battles in Italy and Alaska were front of mind. The Ute people say their warriors from earlier times deserve similar remembrance.

Malcolm Lehi, a member of the Ute Mountain Ute Tribal Council who was on hand for Wednesday’s signing ceremony, said he does not know the details of the Battle Mountain battle but wants that history to be more on display at Camp Hale and in the history books.

“Those things need to be brought to light so that we educate the Anglo people really what happened there before they came, and the battles that happened need to be brought back through history so that everybody’s educated and we’re all on the same page,” Lehi told the Colorado Times Recorder. “It’s really powerful because our ancestors were the ones that fought at those times, during those seasons, to survive, which we are here still, surviving. So that’s the perspective that I look at as supporting our ancestral territories.”

Part of the blame falls on the Ute people, Lehi said.

“The reason why I say that is our elders always spoke about not giving information out,” Lehi said. “It would be like giving our tactical warfare to other people so that they can use it on us, which it has been, as you see through the generations as it came from time immemorial to the present day. That’s why really the history hasn’t been brought up, the wars that happened within this area were never told, so I think it’s time to bring that to light so that we educate people.”

When mining gave way to skiing as the primary economic driver of the local economy in the early 1960s, it was WWII veterans Pete Seibert and Earl Eaton who founded Vail, recognizing the unique ski terrain of the world-famous Back Bowls. Despite the persistent myth that angry Utes forced out of the Gore Creek Valley by white ranchers and miners in the 1880s set the fire that cleared the bowls of trees, it’s far more likely it was a lightning-caused wildfire in 1879.

Seibert, a 10th Mountain veteran who trained at Camp Hale, was badly wounded fighting the Nazis in Italy and became the driving force behind Vail, sought out the Utes for a snow dance during its inaugural season in December of 1962. It took a few days, but in his book, “Vail: Triumph of a Dream”, Seibert said it worked: “There was plenty of snow until late April. The only sour note in the whole episode came from a fundamentalist church in eastern Colorado, which denounced us for using ‘heathen tactics’ to make it snow.”

Lehi says he’s unaware of the Back Bowls myth, but he is very aware (and very supportive) of recent efforts to change the name of the iconic mountain range that rises up to the north and east of Vail – the Gore Range. The mountains are named for Irish aristocrat Sir George Gore, who by all accounts rapaciously hunted his away across the state in the 1850s.

“Those are the things that need to be brought to light so that people understand, especially when they travel these mountains, because as Ute people we were mountain people, and I think the name of those mountains needs to be changed,” Lehi said. “[Gore] wasn’t about conservation.”

One of the suggested new names is Nuchu, which is Ute word for Ute. There are 12 Ute tribes, and both the Ute Mountain Utes and Southern Ute Tribe sent letters of support for the new Camp Hale-Continental Divide National Monument.

Scott Fitzwilliams, the White River National Forest Supervisor in charge of managing Camp Hale and the surrounding 2.3 million acres of federal land, told the Colorado Times Recorder he’s more than ready for the challenge of the new monument designation.

“It’s awesome,” Fitzwilliams said. “I’ve never worked, managed a national monument, so it’s something different. But we had them in Alaska when I was there. It’s an honor to do something about Camp Hale and the veterans and all that’s been done, and then the prehistoric and indigenous people — it gives it some recognition that it deserves. We’re looking forward to it.”

However, one Ute tribe is not happy about the new designation. The Ute Indian Tribe of the Uintah and Ouray Reservation in northeastern Utah issued a press release late Wednesday saying they were only consulted a few days before the signing ceremony, were not included in the years-long and ongoing legislative discussions about the Colorado Outdoor Recreation and Economy (CORE) Act that preceded the designation, and will fight it, perhaps in court.

The Ute Indian Tribe’s Uncompahgre Band considers the Camp Hale area part of its traditional homeland by right and by law.

“We’ve tried to work with this Administration, but time after time they refuse to address the real issues tribes are facing,” Ute Indian Tribe Business Committee Chairman and Uncompahgre Band representative Shaun Chapoose said in the release. “Even on our traditional homelands, they refused to work closely with us. These new monuments are an abomination and demonstrate manifest disregard and disrespect of the Ute Indian Tribe’s treaty rights and sovereign status as a federally recognized Indian Tribe. If it’s a fight they want, it’s a fight they will get.”

The Ute Indian Tribe of the Uintah and Ouray Reservation and the Ute Mountain Utes are two of the five tribes that signed onto a cooperative agreement with the federal Bureau of Land Management and the U.S. Forest Service to have more say in the management of Bears Ears National Monument in southeastern Utah, which Biden expanded this summer.

In a phone interview with the Colorado Times Recorder, Chapoose said the difference is that Utah Republicans consulted his tribe prior to federal action on Bears Ears, which was cut in size by 85% by the Trump administration after being designated by the Obama administration. Biden returned it to its original size, and then some, but Utah is now suing the administration.

Chapoose says the White River and Uncompahgre Bands of the Ute Nation were forced out of Colorado, but tribes that are still in the state – such as the Ute Mountain Utes and the Southern Utes — naturally support their state government when it comes to protecting Camp Hale.

“It works for them because they’re residents of Colorado, right?” Chapoose said. “So, politically, it’s in their best interest to be on the right side of the politics there. If somebody would pull out the actual map of Colorado, you will see who was the bands of the Ute that were in that area [Camp Hale]. And you’re going to see it wasn’t no Southern Ute or Ute Mountain Utes. It was the Uncompahgres and the White Rivers.”

The Ute Indian Tribe is a stakeholder in the proposed Uinta Basin Railway, an 85-mile connector between oil fields in the Uinta Basin that would cross tribal land. Bennet, Hickenlooper and Neguse have expressed their support for an Eagle County lawsuit challenging federal approvals for that railway, which would connect to the mainline and send up to 10 oil trains a day through western Eagle County and along the Colorado River.

“OK, so they don’t like the fact that I’m trying to have a rail to take oil and gas from my reservation to a market to generate revenue so I can provide services for my people,” Chapoose said. “They don’t like that, but at the same time, they forget, if I wasn’t removed from where I was to begin with [in Colorado], I wouldn’t be doing this anyway. So people need to remember, I didn’t choose to be removed. They made that choice for me.”

The manager of Eagle County, where Camp Hale is located, has said the oil train plan would exacerbate climate change, endanger the Colorado River and increase pressure to reopen the Tennessee Pass Line along the Eagle River and adjacent to Camp Hale.

Two of the three Eagle County commissioners on hand for Wednesday’s signing ceremony said they were not sure what impact a national monument designation would have on efforts to reopen the Tennessee Pass Line through Eagle County between Dotsero and Pueblo.

U.S. Agriculture Secretary Tom Vilsack, on hand for Wednesday’s ceremony, previously declined to discuss calls for the federal government to derail the Uinta Basin oil trains. Bennet told the Colorado Times Recorder he hoped they would.