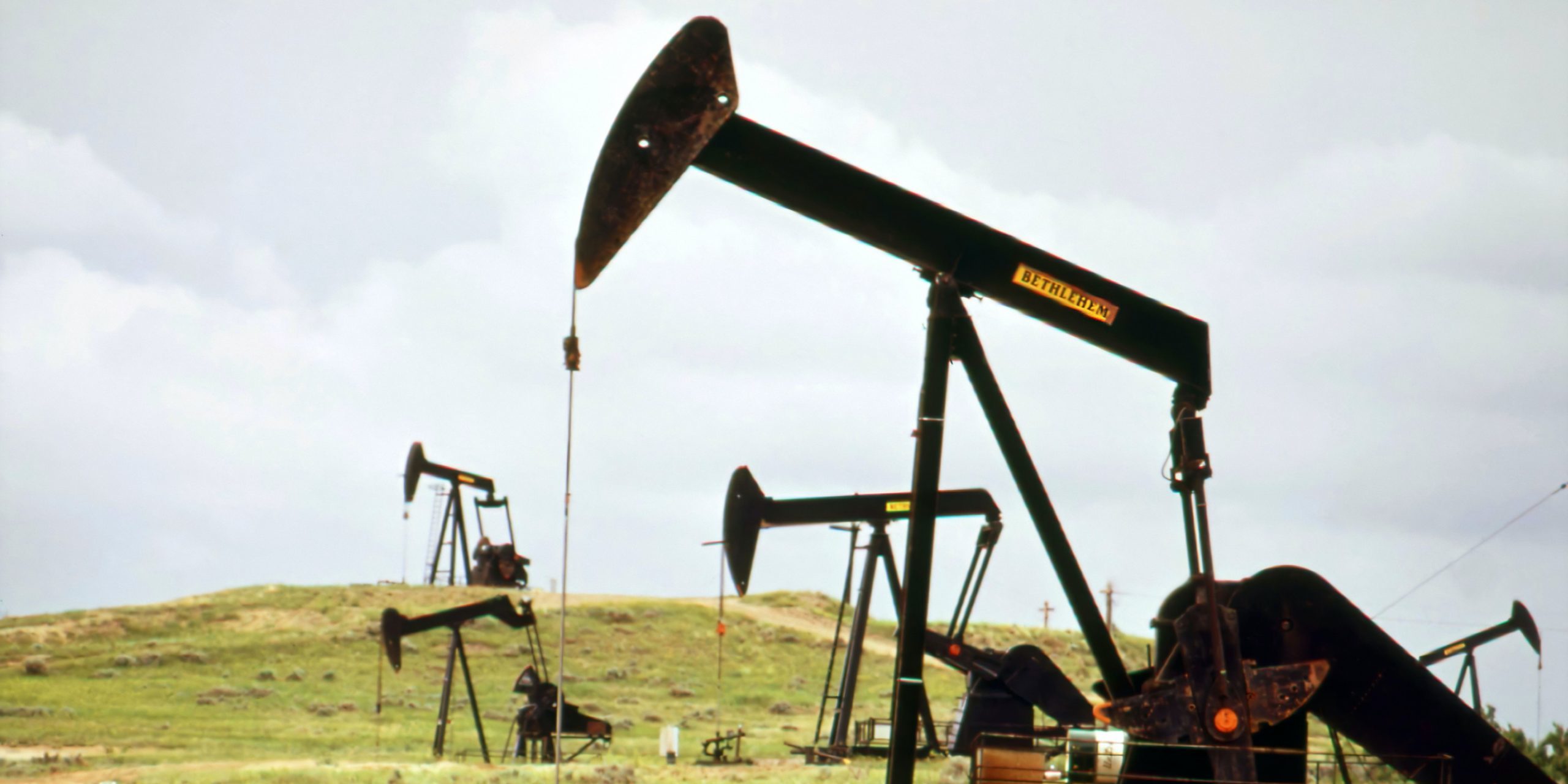 The Colorado Oil and Gas Conservation Commission (COGCC), Colorado’s state agency for regulating oil and gas production, announced earlier this month that it is pushing back the deadline for companies (or operators) to submit a plan that’s intended to prevent abandoned oil and gas wells from needing to be plugged by the state if the company goes bankrupt.

At the time of passing, environmental advocacy groups were pleased to see progress had been made in holding oil and gas operators accountable for the wells they plan to drill, but cautioned that they were holding back celebration until they saw how the COGCC implemented the new rules.

When the rules were passed in March, the COGCC set initial deadlines for financial assurance plan submissions based on how many wells each operator owned. The earliest submission deadline, for operators with over 50 wells, was set on July 1. Earlier this month that deadline was pushed back for the fourth time to Nov. 1 in a notice to operators from the COGCC.

The updated financial assurance rules were intended to stop oil and gas companies from shuffling older, low-producing wells to smaller and smaller operators who are more likely — and sometimes designed — to go bankrupt. Although low-producing and often uneconomic, these wells still leak methane and other dangerous chemicals if left unplugged.

Forty-three percent of operators in Colorado exclusively own these low-producing wells that are at high risk of abandonment, according to a Colorado Times Recorder analysis of 2021 COGCC data.

Click here to view the updated financial assurance rules and here to view how the commission plans to implement them.

In an interview with the Denver Business Journal after the new rules were adopted, Dan Haley, CEO of the Colorado Oil and Gas Association, a group representing Colorado’s oil and gas industry, said that it might take time for operators in the state to “catch up” to the new regulations.

“We need a chance for industry and regulators alike to catch up to these new rules and others that have been approved and are still being implemented and prove we can operate under this new paradigm,” Haley told the Journal. “The rules also come at a steep cost, and by the state’s own calculations, the price to operators is approaching $500 million per year in new regulatory fees.”

According to the Colorado Oil and Gas Association’s website, the financial assurance rules are projected to cost oil and gas operators $150 million per year. According to a study from the Bell Policy Center, a progressive think tank, Colorado has approximately $8 billion in unplugged oil and gas wells and insufficient financial requirements for oil and gas companies could overwhelm the state’s budget.

JoAnn Hackos, the oil and gas committee chair of the Sierra Club of Colorado, said she wanted to see more urgency from the COGCC in implementing the financial assurance rules.

“The extended deadline for operators to submit their financial assurance plans means that in the meantime, defunct oil and gas wells continue to leak pollution into our water, land, and soil,” Hackos said. “It remains to be seen how the COGCC will ultimately implement the new rules, including whether it will give leeway to repeat-violator operators.”

It is been proven definitively that oil and gas production further warms the earth’s climate and leaks unhealthy compounds into the air.

According to COGCC meetings and documents, the deadline for companies to submit their financial assurance plans has been changed four times since the initial date of July 1 was set. The first deadline then changed to Aug. 1, Sept. 15, Oct.10, and now Nov. 1.

There are 376 operators that own 49,331 wells in Colorado, according to COGCC data from April 2022, The deadline for financial assurance plan submission depends on how many wells an operator owns.

The COGCC initially had to push back its deadlines plural because creating the financial assurance form for operators to fill out took commission staff longer than expected. This is according to the notice to operators mentioned above.

Also, the COGCC is hosting extensive financial assurance question-and-answer sessions for operators who are going through the process.

According to the COGCC website, the commission’s mission is to regulate oil and gas production in a manner that prioritizes protecting public health and the environment.

“The mission of the Colorado Oil and Gas Conservation Commission (COGCC) is to regulate the development and production of the natural resources of oil and gas in the state of Colorado in a manner that protects public health, safety, welfare, the environment and wildlife resources. Our agency seeks to serve, solicit participation from, and maintain working relationships with all those having an interest in Colorado’s oil and gas natural resources,” the mission reads.

Kate Merlin, an attorney for the environmental advocacy group WildEarth Guardians, criticized the commission for its failure to curb the negative environmental impacts of oil and gas production in Colorado.

“The Commissioners of the COGCC are utterly failing their responsibilities to protect the state of Colorado either from the environmental impacts of oil and gas production or from the financial risk posed by well abandonment,” Merlin said. “Even the richest oil companies can still easily abandon their wells by selling them to phony broke operators, making taxpayers ultimately responsible for cleanup. Hundreds of thousands of dollars per well in many cases.”

“​The speed at which they are approving new permits is literally breathtaking — adding thousands of tons of new ozone-forming pollution at the same time EPA bumps us up into ‘severe’ ozone non-attainment,” Merlin said. “Just like they did ten years ago, they deny that they have any responsibility to protect people or the environment from pollution — it’s someone else’s job. I don’t know if it’s corruption or gross incompetence, but it’s killing people and it needs to stop.”

One of the development plans for oil and gas wells located within the U.S. Environmental Protection Agency’s “severe ozone non-attainment zone” that covers the Denver metro area — assigned due to years of poor air quality — is scheduled to drill 151 new wells in Aurora.

“They’ve done nothing to protect us from fraudulent transfers by operators trying to escape environmental liability,” Merlin continued. “They’ve done nothing to take advantage of sky-high industry profits to protect the state from the threat of abandonment. They’re putting healthy air farther out of reach every single day and continuing to approve new oil and gas development in the middle of the Denver suburbs. How exactly are they earning these new six-figure salaries, when they seem to be doing even less to protect us than their predecessors did?”

Oil companies have reported record profits amidst competing global energy crises, and energy executives said last week that OPEC+ price increases will not spur new U.S. oil and gas production, even on unused leases like those 1,314 in Colorado.

The new financial assurance rules stop short of full-cost bonding, which would have meant operators had to pay the full cost of plugging new wells (often between $70,000 and $300,000) before they drill. Some environmental advocacy groups, like 350 Colorado, were disappointed in the COGCC for failing to include full-cost bonding in the updated financial assurance rules.

Kate Christensen, the Beyond Fracking coordinator for 350 Colorado, repeated this disappointment in an interview with the Colorado Times Recorder this month.

“Financial assurances are incredibly important because if they had been done correctly (meaning full cost bonding for every well full stop) they would have taken care of Colorado taxpayers,” Christensen said. “But, the COGCC built in so many off-ramps that I stopped paying attention because we know how this will play out. We’ve seen it with setbacks. With the one exception of a very egregious OGDP that was denied, industry has gotten every single variance on the 2,000 ft. setback that they’ve asked for. And now, with the #1 setback off-ramp for OGDPs being that they are in a previously approved CAP, that 2,000 ft. setback rule may functionally disappear for dozens of OGDPs in Weld County and in Aurora.”

Since 2020, oil and gas operators have been required to drill at least 2,000 feet from residential homes and schools. In March, the COGCC rejected an oil and gas drilling proposal that would have sited wells about 700 feet from a residential home, but the commission can allow exceptions to the rule if the operator takes “protective measures” equivalent to drilling 2,000 feet away from a home or school.

Christensen referenced other ways she is disappointed in the COGCC. She mentioned the wells being approved in the non-attainment zones, a lack of analysis of the cumulative impacts of oil and gas production, and an oil train from Utah through Colorado that, if built, would increase the greenhouse gas emissions of the U.S. by 1%.

“I have been thinking about all of the above and haven’t paid enough attention to the financial assurances rollout to give a thorough analysis,” Christensen said. “If I had to predict based on what we’ve been observing at the COGCC, they’ll require a few more forms, get a few more dollars out of industry, grant almost every variance request, and throw themselves a party for being ‘the toughest in the nation.’ I’ve been on calls with activists from other states lately and the funny thing is that we’re not the only state to claim the toughest O&G regulations in the nation.”

The COGCC is holding a hearing Dec. 14 on how oil and gas production contributes to cumulative environmental impacts and is accepting written public testimony until Dec. 2. If you would like to leave a comment, click here.