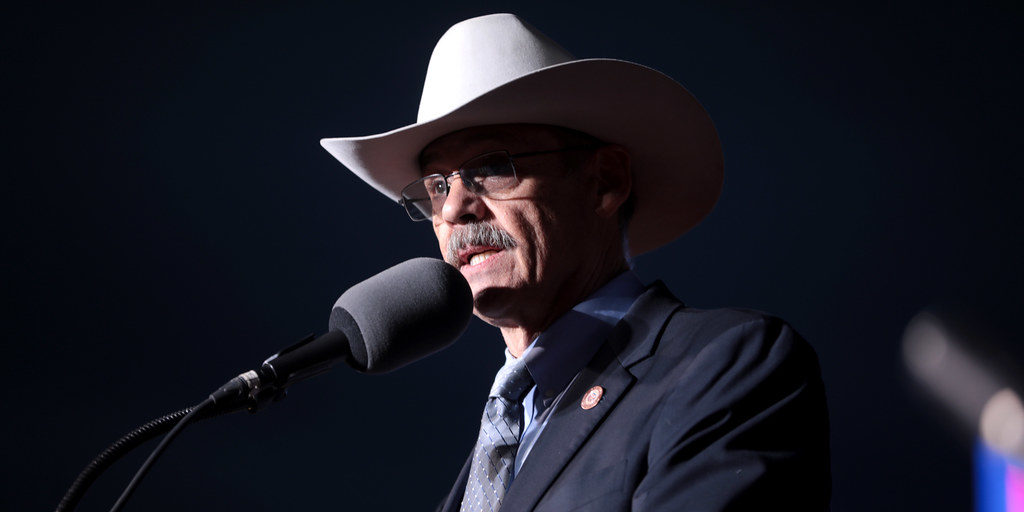 Mesa County, Colorado, Clerk Tina Peters, who faces multiple felony charges, may have lost her race in June’s primary GOP election, but her false allegations of election fraud live on through conspiracists in Colorado and nationally. One of those currently rallying under her banner is state Rep. Mark Finchem, Arizona’s Republican candidate for Secretary of State.

“Now, if you want more proof [of election fraud], shall we talk about Tina Peters?” Finchem said during a radio interview on KTAR News’ “The Gaydos and Chad Show” last week. “That’s a Dominion machine that counted bubbles on a piece of paper, counted the dots. Yet when they went in and did a paper verification and counted the dots, not the documents, not the count of ballots, but the actual votes on those ballots? A 62% error rate in El Paso County, Colorado.”

Peters did indeed claim an exceptionally high error rate was found in El Paso voting machines. This came in August 2022 – after she had already lost her bid for the GOP nomination for Colorado Secretary of State with only 28% of the vote to Pam Anderson.

Peters later called for a recount of the primary vote. Before that could happen, the El Paso County Clerk’s Office had to conduct a logic and accuracy test on voting machines to ensure the results were tabulated correctly. According to the Clerk’s Office, the test did not find a 62% error rate, but rather a 100% accuracy rate, Colorado Politics reported.

Responding to the radio host’s assertion that Peters’ claims were debunked, Finchem said, “Really? You might want to try and get your facts straight.”

Finchem’s run to oversee Arizona’s elections has been riddled with controversy. He has called for the decertification of Arizona’s 2020 election results and introduced a bill to the Arizona legislature to do just that. He was at the U.S. Capitol on Jan. 6, though he says he did not enter the capitol building at any point. Finchem was later subpoenaed by the Jan. 6 Committee, which he called a “kangaroo court.”

Beyond that, Finchem’s ties to far-right militia groups have come under scrutiny. At one point, he self-identified as a member of the Oath Keepers, a far-right militia that provided security for the “Stop the Steal” rally on Jan. 6. Afterwards, several members of the group were charged with “seditious conspiracy” for their role in the insurrection.

In the radio interview, Finchem downplayed his previous involvement with the group.

“Apparently, because I went to a meeting seven, six or seven years ago and signed on to their roster that I was present. Somehow that has been blown up to make me a, quote, member of the Oath Keepers,” Finchem said. “I’m not. It’s fake news.”

In a 2014 article, local Arizona news outlet “In Maricopa” reported that Finchem called himself “an Oath Keeper committed to the exercise of limited, constitutional governance” during his bid for state House.

Concluding the interview, Gaydos asked Finchem, “You think you can win?”

“I think we’re winning,” Finchem said. “That’s why people like you are terrified of me.”