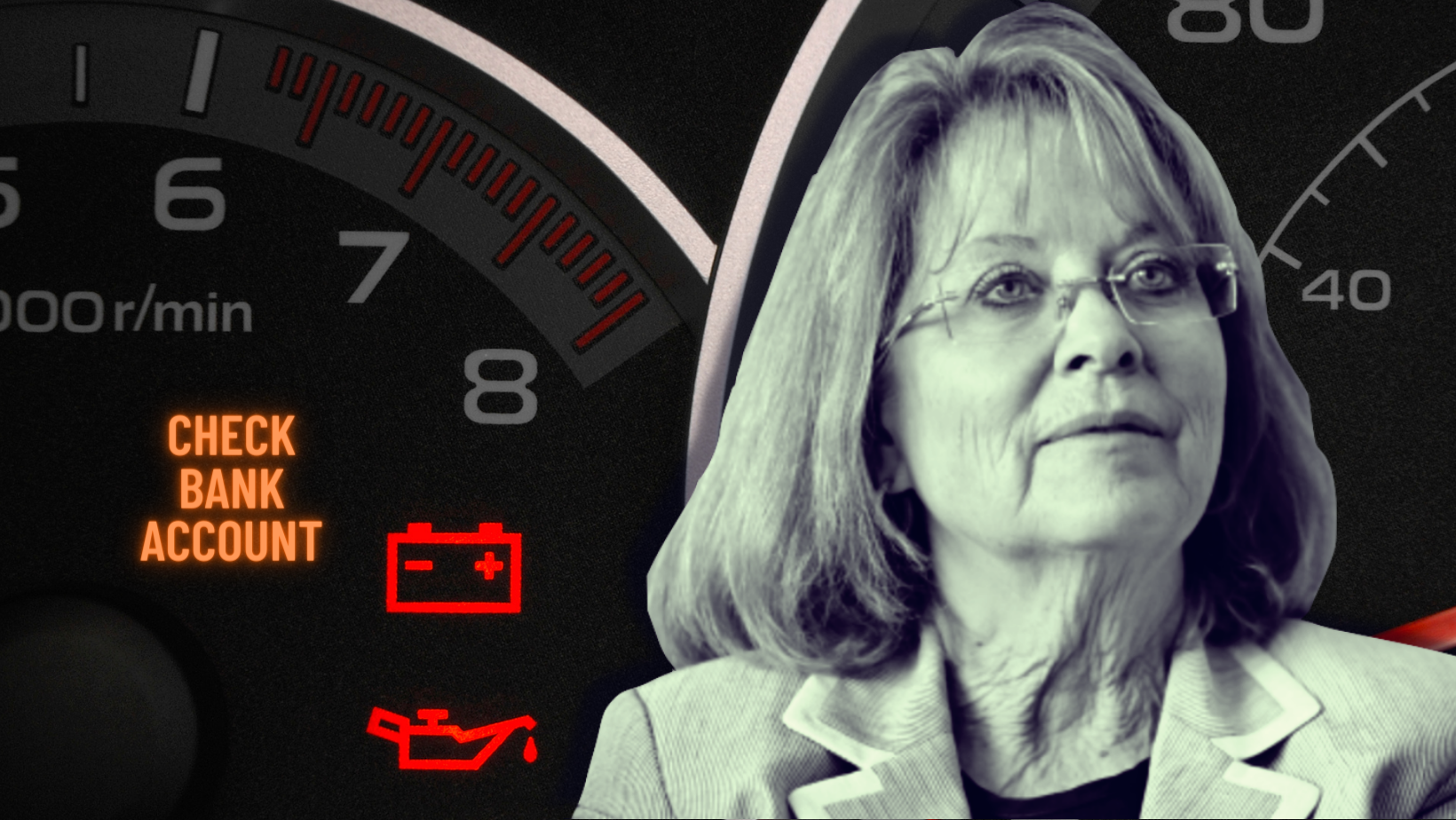 It’s a fair question, then, to ask why Kirkmeyer, as a Weld County commissioner, continued to reimburse herself for miles driven back and forth to work after Republican state lawmaker John Cooke called it “downright arrogant,” and a fellow Republican on the Weld County Commission, Sean Conway, stated flatly at the time, “I just don’t think it’s appropriate.”

The Greeley Tribune concurred the following year, writing that it wasn’t illegal, but, “We don’t think she should do it.”

Kirkmeyer took advantage of the reimbursements on a grand scale, collecting enough money to buy two new cars — on top of her annual salary as commissioner, which ranged from about $80,000 to $105,000 during her tenure in office beginning in 2009.

“I’ve worn cars out, worn tires out,” Kirkmeyer told the Greeley Tribune in 2017.

Over the course of her 11 years on the commission, from 2009 to 2020, Kirkmeyer banked over $73,000 in tax money for trips to and from work, according to a Colorado Times Recorder analysis of her reimbursement records — the first complete compilation of her expense reports submitted during her tenure as county commissioner from 2009 to 2020. (Expense reports from her first period on the board, from 1993 to 2000, were not reviewed for this article.)

The total mileage for her trips to work and back was about 130,000 miles.

That’s a lot of driving, to be sure, but Kirkmeyer’s critics said 1) she could have lived closer to the office 2) driving to work was part of her job, and, 3) it wasn’t fair for county commissioners to collect money for driving to and from work while other county employees, like sheriff’s deputies, could not.

“She Can Move Closer”

In response to the controversy over Kirkmeyer’s reimbursements in 2015, State Sen. John Cooke (R-Weld) told the Greeley Tribune that Kirkmeyer could simply live closer to her office.

“I live in Barb Kirkmeyer’s district, and I live by UNC, so guess what? She can move closer, too,” Cooke told the Tribune at the time.

In fact, Kirkmeyer represented Weld County District 3 on the County Commission, a sprawling district that includes areas close to Greeley, where the Weld County Commission’s offices are located. For example, she could have stayed in her district and lived somewhere in the area of Evans or Garden City and been about five miles from work.

After two Weld County sheriff’s deputies also sought reimbursement for commuting in 2015, an attorney for the Weld County Commission argued that the reimbursements were justified for the commissioners but not for other county employees.

The rationale offered for that decision was that commuting should “not [be] a financial burden” for commissioners, like Kirkmeyer, who represent residents in “a remote part of the county” and need to travel to Greeley to work on the commission.

“Weld County is 4,000 square miles, and commissioners are elected from the districts in which they reside,” the attorney argued.

But aside from the fact that she could choose to live closer to the office, driving to work was part of the job she signed up for, said Kirkmeyer’s critics at the time. As Conway and others said, she shouldn’t get special treatment that Weld employees don’t also receive.

“The arrogance of the commissioners to think that they are the only ones in the county that should get reimbursed is ridiculous,” Cooke told the Tribune.

“And their statements that employees [like sheriff’s deputies] can move closer but they cannot is downright arrogant.”

In a blistering editorial, the Greeley Tribune picked apart the argument that commissioners needed reimbursement for commuting.

“Even those commissioners who live far away know when they seek office that they’ll have to make a long drive, and it’s hard to believe that such travel would keep motivated, well-qualified candidates from seeking office,” stated a Greeley Tribune editorial in 2014, adding that “payments for travel to and from the office every day give the already well-compensated commissioners a cushy deal.”

“Virtually no private sector employees benefit from such an arrangement,” stated the Tribune. “And even the county’s own rank-and-file employees are prohibited from using the expense account for the same purpose.”

“The expenses are, of course, small for a county with a $100 million budget surplus. But that doesn’t excuse the arrogance,” wrote the Tribune’s editors.

Kirkmeyer, who faces Democrat Yadira Caraveo in November’s election to represent Colorado’s 8th Congressional District, could have bought multiple cars for the $73,866 she took home (even if you subtract for tires and gas). In today’s inflated dollars, a new Honda Accord costs about $26,000. A Tesla about $65,000.

Kirkmeyer took home another $50,000 in mileage reimbursements for driving to work-related events, not including the home-to-work-and-back miles, bringing her grand total to over $123,000 during her tenure on the Weld County Commission from 2009 to 2020.

“Alone on the Current Board in Claiming Mileage“

Kirkmeyer defended her reimbursements at the time by pointing out that some commissioners in other counties (e.g., Larimer, Jefferson) did the same thing — and that it had been done in Weld historically. In addition, Colorado reimburses state legislators, but no other state employees, for driving to the Capitol. But these lawmakers currently earn about $40,000 per year, about half as much or less than county commissioners, like Kirkmeyer.

“I live, round-trip, 85 miles from (Weld County headquarters),” she told the Tribune in 2015. “All the commissioners used to do commuting miles, all the way back into the 1990s.”

Overall, of the eight Weld commissioners who served on the board with Kirkmeyer from 2009 to 2020, only three requested cash for commuting to work, according to the records reviewed by the Colorado Times Recorder.

But by 2017, three years after a 2014 Greeley Tribune investigation exposing the reimbursement practice, none of the Weld commissioners — except Kirkmeyer — was requesting money for commuting to work.

Kirkmeyer’s mileage payments came up — along with other grievances — during a failed recall effort in 2017 and an IRS audit of Weld Country. The audit led to the reimbursements being taxed as income, whereas before they were tax-free.

“I Feel Good About It”

In a TV appearance in August of this year, as her congressional race began to heat up, Kirkmeyer bragged about being able to answer questions about her record “very truthfully.“

But Kirkmeyer didn’t return multiple requests to answer questions that arise from this article. Even if she thought she deserved to take reimbursements for her mileage to and from work, why did she continue to seek reimbursements after she far surpassed the expenses of driving? In other words, why did she seek and take so much money? Why did Kirkmeyer think it was okay for her to take the money for commuting to work when county workers were barred from doing so and she could have moved closer to her office? Why did she continue seeking reimbursements for her commute to work after all her fellow commissioners had stopped doing so? What does she think of the accusation that her reimbursements were “arrogant,” inappropriate, or, at a minimum, as the Tribune wrote, “not a good look.”

Kirkmeyer’s race against Caraveo is expected to be among the most competitive congressional contests in the country in November (It’s currently seen as a tossup.), and its outcome may determine which party controls the U.S. House of Representatives.

UPDATED 10/14 with a map and information about Kirkmeyer’s District 3.