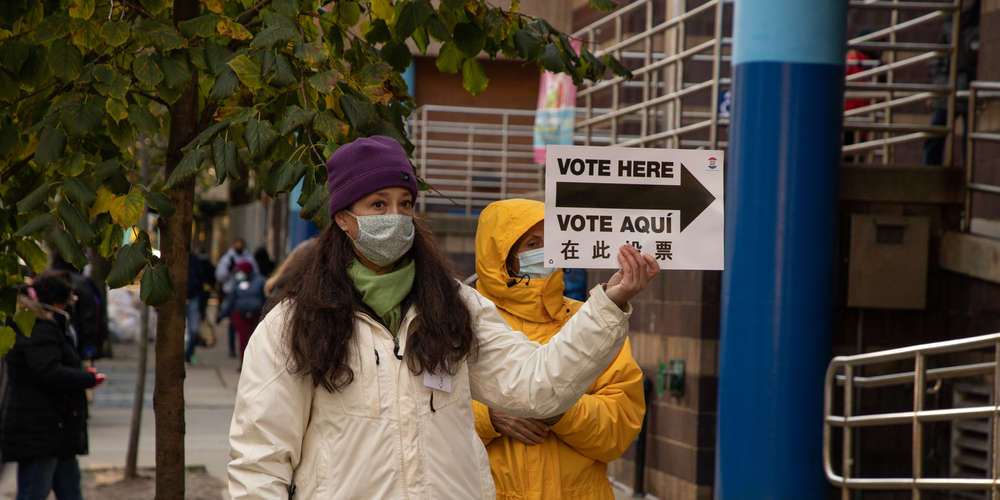 This story is part of a project called Democracy Day, in which newsrooms across the country are shining a light on threats to democracy.

In just over a month, Colorado’s 3.7 million active registered voters will begin receiving their ballots in the mail, ahead of a crucial 2022 midterm election that will decide control of the statehouse as well as several key congressional contests.

The vast majority of those voters are expected to return their ballots through the mail or via drop boxes maintained by county elections offices, under a vote-at-home system that was first adopted in 2014 and has been hailed as a national model.

Amid concerns about the COVID-19 pandemic in November 2020, less than 6% of Centennial State voters cast a ballot at an in-person polling place, the Colorado secretary of state’s office said. The mail-in ballot system helped Colorado record an official turnout rate of 76.7% of eligible voters, the second-highest figure in the country.

Beneath those impressive top-line numbers, however, stark demographic inequalities have persisted in Colorado’s turnout rates, U.S. census data show. In 2020, turnout among eligible Colorado voters who aren’t white or who reported Hispanic origin was nearly 20 percentage points lower than the rate for white non-Hispanic voters — a gap significantly worse than the national average, and one that has remained stubbornly prevalent over the years.

The data come from the Census Bureau’s Current Population Survey, a monthly poll of about 60,000 U.S. households. As weighted samples, the Bureau’s turnout figures differ slightly from the official tallies by state elections officials, and state-level CPS data have a higher margin of error than the survey’s national estimates.

Neither the state of Colorado nor county elections offices track voter turnout or registration statistics based on race or ethnicity. The CPS data, collected in the Bureau’s biennial Voting and Registration Supplement, were most recently collected in November 2020.

State-level data analyzed by Newsline showed that while 72% of white non-Hispanic Coloradans who were eligible to vote did so in 2020, among Coloradans who identified as Black, Hispanic, Asian-American or Indigenous, voter turnout was just 53.2%.

About 22% of Coloradans reported having Hispanic or Latino origin in the 2020 Census, up slightly from 20.7% in 2010 to 21.9% last year. Under a practice known as the “two-question” format, Census and CPS respondents are asked about Hispanic or Latino origin separately from a question about race — a format criticized as not fully representative of how Latinos in the U.S. conceive of their racial identity.

The Colorado racial voter-turnout gap of 18.7% was worse than the national figure of 12.6% in 2020, according to CPS data. It’s part of a long-term pattern that has persisted in Colorado both before and after the adoption of the mail-in ballot system.

While the turnout gap between racial demographics in Colorado has remained wide, however, Newsline’s analysis of census data shows that the gaps have narrowed between income brackets, especially following the transition to mail ballots in 2014.

About 69% of Coloradans with household incomes above the median reported voting in 2020, compared to 66% of those with incomes below the median. That three percentage-point difference is smaller by far than the 20-point gap between the two categories that Colorado averaged in the five presidential elections preceding vote-by-mail adoption.

With relatively high overall turnout and fewer barriers to voting, the reasons eligible Coloradans don’t vote in a given election year has continued to shift away from national trends.

In its biennial voter supplement, the CPS survey asks respondents who didn’t vote in the previous November election to select from a list of common reasons why, such as problems with registering to vote or being away from home.

In 2020, more than half of Colorado non-voters said they chose not to vote because they “didn’t like the candidates” or because they thought their vote wouldn’t make a difference, according to CPS estimates.

An estimated 8.4% of Colorado non-voters, however, reported “registration problems,” slightly higher than the national average — and, despite the relative convenience of mail ballots, about 1 in 7 non-voters reporting being “too busy” to vote.

With mail ballots becoming the norm, however, several common reasons given by non-voters across the country are virtually unheard of in Colorado. In 2020, no respondents polled by the CPS survey in Colorado reported failing to vote because of an illness or disability, transportation problems, bad weather or concerns about the COVID-19 pandemic — a set of explanations cited by nearly 20% of non-voters nationally.

This story originally appeared in Colorado Newsline, which is part of States Newsroom, a network of news bureaus supported by grants and a coalition of donors as a 501c(3) public charity. Colorado Newsline maintains editorial independence. Contact Editor Quentin Young for questions: [email protected]. Follow Colorado Newsline on Facebook and Twitter.