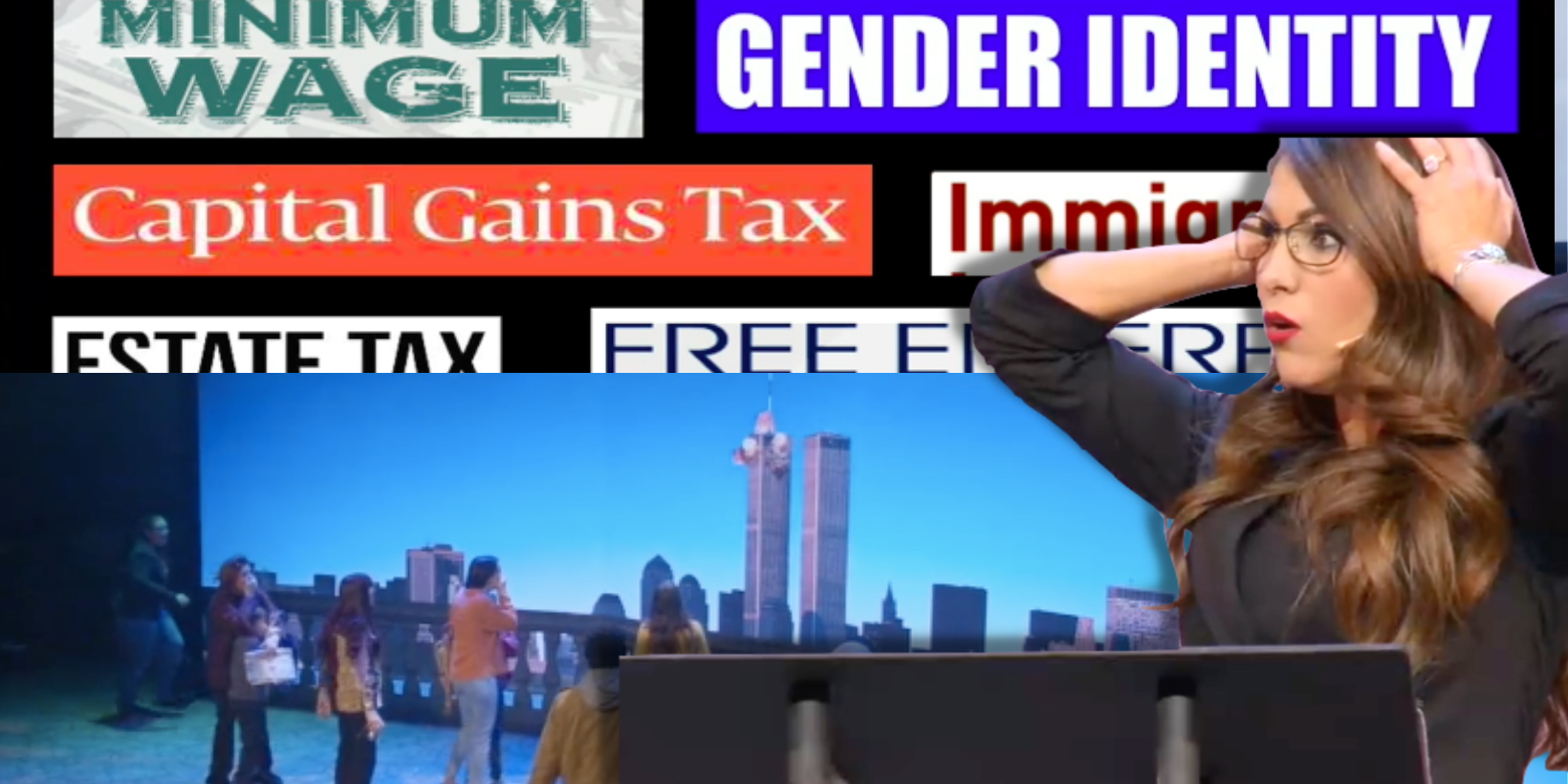 “This is happening because Christians have not been involved,” said Andrew Wommack, founder of Truth and Liberty, but also Charis Bible College and Andrew Wommack Ministries. “It doesn’t matter what they say. America was founded to be a Christian nation. It’s not functioning that way at this moment.”

Wommack pointed to his own recent victory in Woodland Park, where the city council voted last month to rescind a previous agreement with Wommack, resulting in the waiving of millions in potential property tax revenue for Charis’ new housing project, as a sign of his divine favor.

“God is protecting me, and he’s done great things right here,” said Wommack. “We’ve had a fight in Woodland Park and we won the fight. And just in August, man, the city released us and even admitted that what they asked us to do was illegal. We won hands down. And so praise God, there’s good things happening.”

On Sept. 8, the first day of the conference, Charis Bible College announced a $250,000 donation to the city of Woodland Park. “It is our joy to freely give back to the community we call home,” said Billy Epperhart, CEO of Andrew Wommack Ministries and Charis Bible College in a news release.

The theme of the event, echoed by Wommack and every speaker to grace the stage of Charis Bible College’s 70,000-square-foot chapel, was a reminder that Christians should — must — get more involved in political and public life.

“Most of us don’t have a national platform like this, but if you would stand up and speak the Word of God in your workplace, in your family, in your church, and if you would stand up and begin to take a stand, I guarantee you then when things begin to turn around, people would recognize that was God,” said Wommack during his opening remarks. “I’m saying that Christians, believers, have a responsibility to impact their culture.”

The specific areas of culture that required the impact of Christians were echoed by many of the speakers — LGBTQ rights, racial and social justice, and COVID-19 restrictions were addressed by nearly every presenter over the three-day event.

“We should never have permitted gay marriage to be legalized in the United States of America,” said Mario Murillo, who spent four days in July hosting a tent revival at Radiant Church in Colorado Springs. Murillo also spoke against events involving drag queens, invoking the image of “an obsese, bearded man in a dress.”

Anti-abortion activist Janet Folger Porter, founder of Faith2Action and one of the lead organizers behind six-week abortion bans, or “heartbeat bills,” echoed Murillo’s sentiment. “Obergefell did not settle the issue of marriage any more than Roe v. Wade settled the issue of abortion,” she said. “It’s going to be overturned. Clarence Thomas declared it in this last decision in Dobbs. It’s going to happen and we need to keep fighting until it happens.”

Lance Wallnau, one of the keynote speakers of the event, claimed God is helping in the fight against homosexuals. “We need to be praying for the unfinished work of the United States because America’s gotten off track,” he said. “It’s promoting lesbian transgender ideology globally. It’s putting the LGBTQ flag, even the BLM flag, up with our national flag. And God is taking that down.”

Wallnau, a proponent of the Christian dominionist “Seven Mountain Mandate,” explained how progressives in Colorado took over the “seven mountains” of cultural influence. “You see in Colorado, you guys got flipped from red to blue because the strategy was designed in these seven spheres by billionaires and national activists who decided they would make Colorado the test case of how they could change America,” he said. “Focus on the Family was here with Dr. [James] Dobson. What’s the name of the pastor that fell? That had the great church out here, New Life. Ted Haggard. World Prayer Center was here. C. Peter Wagner was raising money in Korea for a World Prayer Center, and the devil said, ‘I’ll flip the reddest of red states.’ He got three billionaires. One was an environmentalist fanatic, the other one was a gay fanatic, and the other was just a progressive that wanted to take over. They put their money together and they said, ‘Look, we can all get our agenda together. So let’s just elect whoever we can elect and put an office who could beat a Republican. They won’t always be ideal, but we’ll get the ground.’”

Wallnau, who blamed Colorado’s political shift on billionaire George Soros, encouraged Christians to adopt a similar strategy. “You have to surround the seven mountains in Colorado,” he said. “That’s the Elysium here. You have to challenge the church, create your own media outlets, have your own lawyers that are ready to countersue or challenge what they do when they try to bully you. You have to have your own wealthy investors, philanthropists, and businesspeople that get what is being funded. And you have to mobilize small groups of Christians, intercessors, prophetic activists, who are going to work in a couple of different capacities, depending on how they need to be. deployed — could be the school board issue, could be the precinct strategies, but you have to be able to have these groups that are ready to be deployed.”

For Wallnau, the solution is simple. “We should have our people sitting at the gates.”

Murillo echoed similar sentiment. “How did all these elections happen?” he asked. “They all happened before the pandemic, this insidious George Soros, Bill Gates, this network of globalists, Davos. There was all of that. All of that. The teachers union, all of the tentacles of this monster were laid in place long before the pandemic.”

Porter too invoked the World Economic Forum, Klaus Schwab, and the Georgia Guidestones, continuing the evangelical tradition of espousing bizarre, paranoid conspiracies about the dangers of globalism and the secular world — a tradition established by evangelical media scion Pat Robertson in his book The New World Order.

The speakers also gave credit to famed evangelist Billy Graham, one of the most influential Christian evangelists of the 20th century, who befriended presidents and operated a Christian media empire.

“See, when I think of the word evangelist, I don’t think of what a lot of people do,” said Murillo. “I think of Dr. Billy Graham, who brought integrity to ministry”

Wallnau even paraphrased Graham, who in 1972, following a prayer breakfast, made a string of antisemitic remarks to President Richard Nixon. “Whatever your geographic sphere of assignment is, is where God wants you to occupy the gates,” said Wallnau. “This is the Jewish promise that was given to  Abraham: ‘You shall be the head and not the tail. You shall be above, but not beneath.’ If people are confused about head and tail, it’s a mutt. Why do you think 2.5% of Americans are Jewish and they have such influence? They’re your gynecologist, your ophthalmologist. They’re your accountant, your lawyer, doing comedy. They own the club. If they’re in Hollywood, they’re producers. They own the banks. Jews. Why? Because they’re trained, ‘Be the head.’ It’s a much better view than the tail.”

Jews and queers weren’t the only minorities targeted during the conference. The emotional catharsis of the three-day event was Saturday’s “9/11 Memorial Tribute,” which featured songs, a reenactment of the terrorist attacks on Sept. 11, 2001, and profiles of the victims.

Following the tribute, Truth and Liberty’s executive director, Richard Harris, who has frequently appeared alongside Mesa County Clerk and Recorder Tina Peters at public rallies, told the audience, “Islam is the spirit of the Antichrist.”

Harris went on to note that transgender people and abortion also embody the “spirit of the Antichrist.”