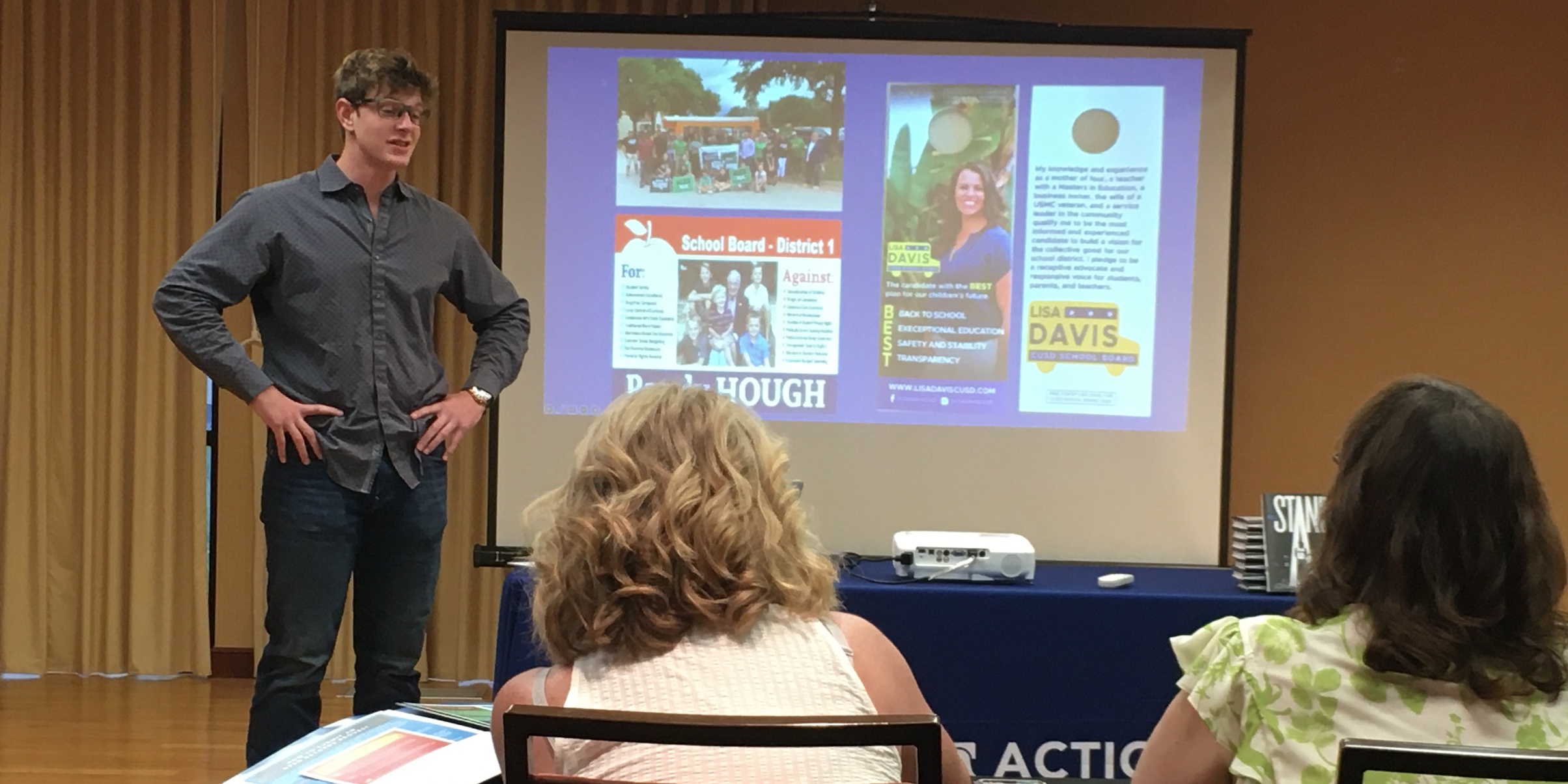 Nineteen residents from around the Grand Valley, including Mesa County Valley District 51 School Board President Andrea Haitz and fellow school board member Angela Lema – attended the “save our schools” workshop held Thursday, August 26 at a Grand Junction hotel. Schindler presented the workshop on behalf of Heritage Action for America.

Twenty-two-year-old Noah Schindler, the Mountain West Regional Coordinator for Heritage Action for America, told a small group of western Colorado residents attending a “save our schools” workshop that words like “equity, anti-racism, social justice, culturally responsive teaching,” are “buzz” words for Critical Race Theory, which he said was based on a “Marxist Theory.”

“Our goal is to stand with parents, students and teachers opposing CRT,” Schindler said. “Diversity, equity, inclusion – it’s another way to say CRT. We shouldn’t be teaching this. It’s spoiling their innocence.”

Schindler went on to claim without evidence that CRT causes degradation of societal values and “places kids into one of two groups – you’re either oppressed or the oppressor.”

Actually, “Critical race theory is an academic concept that is more than 40 years old,” according to edweek.org, “The core idea is that race is a social construct, and that racism is not merely the product of individual bias or prejudice, but also something embedded in legal systems and policies.”

Mesa County Valley District 51 doesn’t teach CRT; it’s a graduate-level academic framework most frequently seen in law school. It’s also not Marxism. However over the past three years conservatives began using CRT to attack basic diversity and inclusivity programming as a means of that’s been a standard part of school districts’ curriculum for decades, including in Mesa County.

Heritage Action for America disagrees with the notion that there is systemic and structural racism in America; that there are forms of racism “deeply embedded in systems, law, written or unwritten policies, and entrenched practices and beliefs that produce, condone, and perpetuate widespread unfair treatment and oppression of people of color,” as defined by Healthaffairs.org. www.healthaffairs.org/doi/10.1377/hlthaff.2021.01394

“Institutions don’t do this,” Schindler said.

Heritage Action for America is the political arm of the Heritage Foundation, a right-wing think tank founded in 1973 by Colorado beer baron Joe Coors. Heritage Action has only been around since 2010, but, as a 501(c)4 or so-called “dark money” nonprofit that doesn’t have to disclose its donors, it’s one of the most powerful conservative political organizations in the country. It is best known for leveraging the far-right Tea Party faction’s opposition to Obamacare into the 2013 federal government shutdown.

Part of its efforts on the education front includes hiring regional coordinators like Schindler and sending them communities all over the country to push its talking points attacking Critical Race Theory, and, more broadly, what it considers “buzz words” for CRT.

Lema and Haitz were part of a conservative bloc of three school board candidates that ran and won in 2021, in what had traditionally been a nonpartisan election. The group was endorsed by local Republicans and Stand For The Constitution, a far-right group that believes the Big Lie and opposes mask policies, vaccine mandates and the teaching of so-called Critical Race Theory in schools. CRT played a prominent role in the bloc’s campaign.

Lema said she attended the Heritage Action event because a friend suggested she do so. She said she does not believe systemic racism exists in America.

Haitz said she was curious to hear what tips Schindler would share about running for school board. When asked if she agreed with Heritage Action materials that claim words like “equity” and “inclusion” are buzz words for CRT, she responded that it depends on how those terms are defined.

“As far as equity in District 51 we look at it as creating access and opportunity – while in other places, equity takes away from others so that the end results are the same.”

Haitz said she is opposed to schools talking about “social justice” – another one of Heritage Action’s “buzz” words.

“To start telling kids that certain groups are victims, while others are oppressors – we have to be careful,” Haitz said. “That’s getting into the political realm, rather than focusing on education. I just don’t think we need that in schools.”

Other attendees included SFTC President Tom Keenan. The Stand For The Constitution group consistently challenged the prior school board over masks policies and vaccine mandates during the height of the COVID-19 pandemic.

The meeting began with the group standing to recite the Pledge of Allegiance, followed by a prayer led by Keenan. A free dinner from Chick-fil-A was provided for attendees.

Until 2020, the fast-food chain restaurant was known for donating to organizations with anti-LBGTQ stances.

Schindler claimed CRT promotes collective guilt – and that people should not have to apologize for wrong actions committed in the past.

He also scoffed, that there’s no such a thing as “unconscious bias.” Unconscious biases are social stereotypes about certain groups of people that individuals form outside their own conscious awareness.

Attendees took home a tote filled with colorful, slick, easy-to-read handouts on topics such as running for school board, how to file document requests through Colorado Open Records laws, and tips for testifying before legislative committees.

“You guys may be able to educate me on this,” he said, eliciting chuckles from the audience. “I’m impressed by hearing stories of the seats you flipped. One would have been impressive.”

Schindler mentioned there are national groups that coach conservative school board members throughout their term.

Keenan said “a lot of people voted because they knew we had conservatives in a nonpartisan race.”

Nathan Duell, Heritage Action for America coordinator for Arizona, also attended the event. Duell said there will be more of these workshops in Grand Junction, now that Heritage Action has hired Schindler, who started in July.