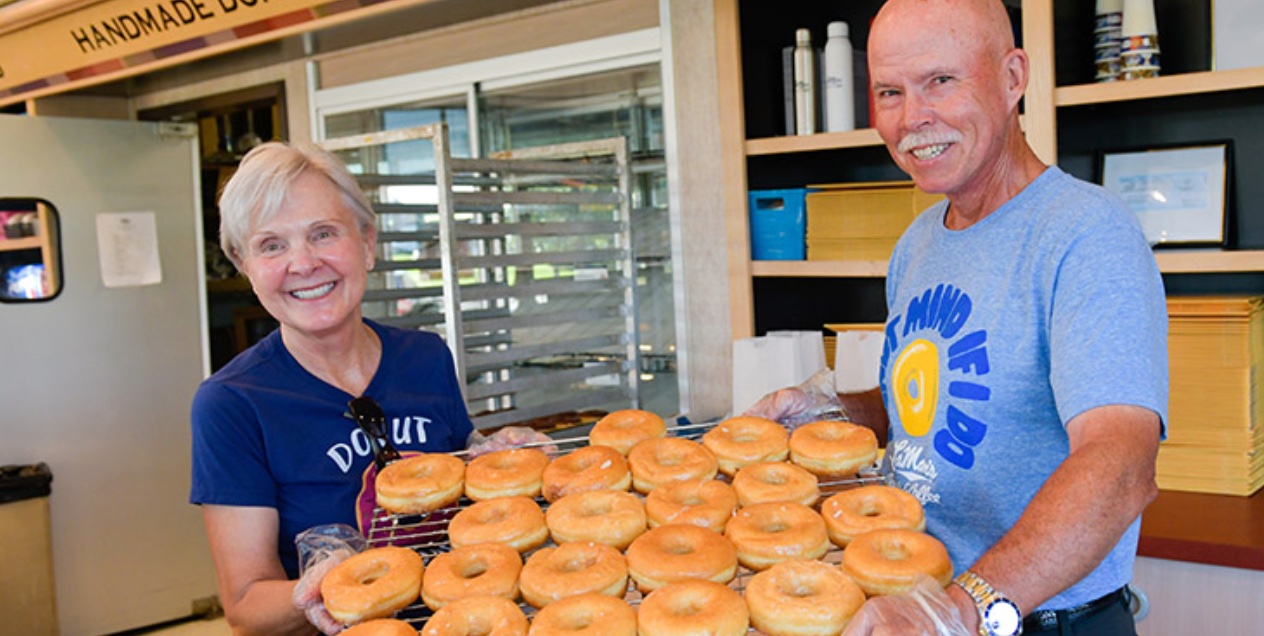 That could be the explanation for the extraordinary kindness and dedication that has motivated a semi-retired Broomfield couple to deliver donuts twice a week — every week — for more than 2 ½ years to hospital ER workers and other first responders.

That adds up to about 500 donuts delivered more than 152 times — or an astounding 76,000 melt-in-your-mouth masterpieces — and a lot of happiness for heroic folks since the pandemic began.

Gratitude is the simple reason that Chris and Barry Hubbard spend hours of their time every week picking up donated confections from LaMar’s Donuts & Coffee in Westminster, packing them and delivering them to police officers and Emergency Department workers at UCHealth Broomfield Hospital and other Denver-area hospitals.

“It feels so good to know that these donuts are not going to waste and that they make so many people happy,” said Chris Hubbard, 69, who also spends several hours every week picking up extra food from grocery stores and delivering it to area food pantries.

Her husband of 31 years, Barry Hubbard, 66, assists as the “donut dude” of their two-person “donut squad.”

“When the pandemic first began, people were banging on pots and pans at 8 p.m. to thank health care workers. Then the recognition stopped,” Barry said.

As the pandemic wore on, the Hubbards noticed a trend.

“It seemed as though hospital workers were being taken for granted,” Barry said.

So, the couple kept making twice-weekly donut deliveries to make sure first responders knew they were honored and appreciated.

“We’re trying to draw attention to and thank the first responders who take care of all of us,” said Chris.

‘Who doesn’t love a donut?’

The Hubbards are as reliable as the hospital staffers and police officers they are honoring.

Like clockwork, they arrive with sweet treats on Tuesday and Friday evenings.

Smith picked up and hugged a box of donuts.

Smith has marveled at the Hubbards’ consistency.

The timing is perfect because 7 p.m. marks the shift change. Workers who have been on duty for 12 hours hand the baton to the night crew. Anyone who wants a jolt of sugar can enjoy a sweet treat.

Zach Coram,  a radiation technologist, has a soft spot for sprinkles.

“Who doesn’t love a donut?” he said. “It’s amazing. It’s a nice gesture. And LaMar’s is a cool local company.”

Coram called the Hubbards “the best.”

“It’s a classic. This is the reason I work on Tuesdays,” she joked.

The ER crew shares donuts with staff members throughout the hospital and ambulance crew members too.

Barry has an addiction to LaMar’s sour cream donut. This U.S. Naval Academy grad, who served around the U.S. with Chris at his side, allows himself one donut each morning before he heads out to a post-retirement job mowing the greens at a golf course near the couple’s home. He has tried other donuts, but has determined that LaMar’s makes the best.

During many trips to their local donut shop, the couple learned that LaMar’s donates leftover donuts to non-profits. So, they worked with managers to hatch their twice-weekly hospital and police department deliveries.

“Since we make fresh donuts every day, we’ve always donated to different charities across the state, whether it be shelters or hospitals,” said LaMar’s director of marketing and advertising, Temi Osifodunrin. “We do that at all 25 of our locations across five states. It’s our way of making people happy.”

The Hubbards have been thrilled to scoop up leftovers and bring them regularly to people they appreciate.

Both Chris and Barry are cancer survivors. She endured a battle with breast cancer back in 1994 when she was just 36.

“I had to have two surgeries and went through radiation and chemotherapy,” Chris said.

Barry was stationed then in Honolulu.

“I was a naval submarine officer and retired as chief information officer for the submarine forces in the Pacific,” Barry said. He then went on to work in IT jobs before he and Chris retired in Colorado. They have two sons and three granddaughters.

Chris said she has no regrets about having endured cancer. She received excellent care at the academic medical center in Hawaii and has been cancer-free for nearly three decades.

“It was one of the greatest blessings of my life. I had to learn how to let go and appreciate my life. I started thinking more about what I could do for other people,” she said.

Barry is clearly her biggest fan.

“She gives back in spades,” he said.

Barry was diagnosed with Stage IV tongue cancer on his birthday eight years ago. The news, at first, was grim. He had only a 5% chance of surviving. If he did live, he might lose significant parts of his tongue.

For months, this donut lover had to subsist on a liquid diet. But he, too, had a positive attitude, and Barry beat the odds, survived and his tongue is intact. The couple was then living in San Jose, Calif. Barry credits excellent care he received. One of the side effects of cancer was that he lost significant weight he had wanted to shed. He once weighed nearly 290 pounds and now is healthy, trim and cancer-free.

“Health care workers are the reason we’re alive,” Barry said. “They go out of their way to help all of us.”

The only times Chris and Barry have missed out on their donut deliveries only during bouts earlier this summer when they got COVID-19 and during rare vacations. Both are fully vaccinated and boosted, so thankfully their COVID-19 cases were mild and they did not need hospital care.

Police officers at Arvada and Westminster noticed their absence and, when the donuts didn’t appear, joked that they were going to come do “welfare checks” on the couple.

Chris loves being known as “the donut lady,” and enjoys interactions with great people.

“Everybody knows what these bins are about,” she said. “We’re here to bring joy.”

Editor’s Note: During the pandemic, the Colorado Times Recorder will occasionally post articles, like this one, from UCHealth Today, which is published by UCHeatlh, the hospital associated with the University of Colorado School of Medicine.