Colorado Republicans in Crisis: ‘We Were Told We Should Be Put in Front of a Firing Squad and Shot’ 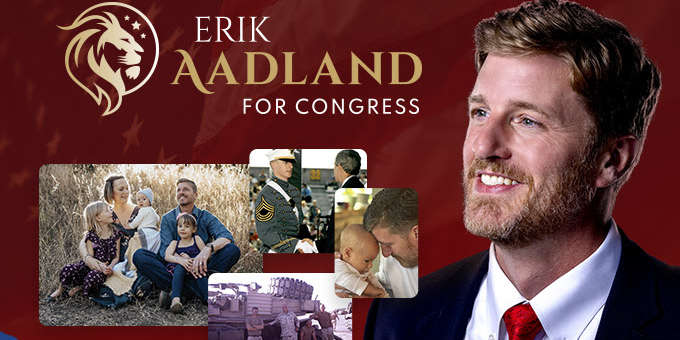 Last month, The Colorado Times Recorder reported on Aadland’s connection to far-right and QAnon social media accounts, and his recent endorsements from Tancredo, a former congressman and contributor to white nationalist publication VDARE, and Vallely, who was described by Media Matters as an “unhinged right-wing conspiracy theorist,” are another sign of Aadland’s connection to fringe, extremist politics.

“I am inspired and enthused by Major General (Ret.) Vallely’s endorsement,” said Aadland, a Republican, in a campaign announcement. “It’s an honor to earn the trust of a leader and thinker of his caliber. I share MG Vallely’s concern about the severe issues facing our economy, public safety, energy, and educational systems, and I intend to fight for all Coloradans to resolve these crises. I appreciate the leadership that MG Vallely and his generation gave us during their time. I will continue that tradition by ably representing the 7th district in Washington.”

Vallely, who graduated from West Point in 1961, retired from the U.S. Army in 1991 and has worked as an analyst for Fox News. Alongside Mike Flynn, Phil Waldron, Seth Keshel, and others, Vallely is part of a group of former military intelligence officers who have cast doubt on the 2020 election and endorsed QAnon conspiracy theories. Vallely has also endorsed Colorado gubernatorial candidate Danielle Neuschwanger, who first ran as a Republican but became the nominee of the American Constitution Party.

“QAnon is information that comes out of a group called ‘The Army of Northern Virginia,’” said Vallely during a 2019 appearance on the Americanuck Radio podcast. “This is a group of military intelligence specialists, of over 800 people that advises the president. The president does not have a lot of confidence in the CIA or the DIA (Defense Intelligence Agency) much anymore. So the President relies on real operators, who are mostly Special Operations type of people. This is where ‘Q’ picks up some of his information.”

Vallely’s statement about “The Army of Northern Virginia” is a reference to the U.S. Army’s Intelligence Support Activity, which was given the nickname, popular in military special operations circles, by the late 80s. Flynn has benefited from the QAnon movement, but also said that Q is “total nonsense” created by the CIA. Others have suggested that failed Arizona congressional candidate Ron Watkins could be behind the mysterious posts that spawned the conspiracy-motivated movement.

Vallely’s prominence among QAnon supporters — who believe, among other things, a cabal of satanic pedophiles is ruling the world — is unique because of the 1980 paper, From Psyop to Mindwar: The Psychology of Victory, that Vallely co-authored with Michael Aquino, a man who in many ways is the basis for the modern concept of satanic pedophiles orchestrating widespread ritual satanic abuse.

Aquino, a psychological operations officer who took part in Operation Wandering Soul during the Vietnam War, was a practicing Satanist, working with Anton LaVey’s Church of Satan until 1975, when he founded the Temple of Set, an occult order grounded in Satanism. In 1983, Aquino performed a solitary rite at Walhalla, part of the Wewelsburg castle in Germany that was utilized as a ceremonial space by the Nazi SS during World War II. In 1987, Aquino was investigated as part of the Presidio sex abuse scandal, in which a group of parents claimed as many as 37 children may have been sexually abused at an Army day-care center. According to author David McGowan, “One child positively identified Aquino and his wife, Lilith, and was also able to identify the Aquinos’ private home and to describe with considerable accuracy the distinctively satanic interior décor of the house.”

Neither Aquino nor his wife was charged with any crimes in connection with the Presidio case, but his name emerges in discussions of evidence of satanic pedophiles working within the U.S. government ever since.

Aadland is running for Congress against state Sen. Brittany Pettersen (D-Lakewood) after beating out Tim Reichert and Laurel Imer in the Republican Primary.

During an appearance yesterday on Dan Caplis’ radio show, Aadland expressed optimism over recent polling that shows him closing in on Pettersen. “We’re seeing that the wind is at our back and we’ve closed the distance in this district to two points with my Democrat opponent, which is huge, considering that Biden won this district by 15 points,” said Aadland. “So we’re closing the distance. So we’re going to win this district. … I think that if you dig into the results of that poll, it demonstrates that if voters are educated, I beat her handily. [Voters] don’t want her radical, progressive policies. They don’t want clean injection sites in their neighborhood. They don’t want bigger government and more spending. They want to get this economy energized and address crime that’s out of control along the front range. My opponent has no solutions to these problems.”

Pettersen’s campaign is not particularly concerned about the recent polling. “MAGA Republican Erik Aadland has sympathized with domestic terrorists, called the January 6th insurrectionists ‘political prisoners,’ and brags about one of his staff participating in the attack on the US Capitol,” said Mark Hatton, the campaign manager for Pettersen for Colorado, in an email. “This week, he celebrated his endorsement from white nationalist Tom Tancredo. Together, Tancredo and Aadland represent the dangerous conspiracy-wing of the Republican Party. Aadland’s deep ties to QAnon and other fringe groups is unsurprising, but wildly out of touch with the voters of the 7th District who have rejected Trumpism time and time again. Aadland’s embrace of the Big Lie election conspiracy, radical opposition to abortion access, and calls to overturn constitutional protections for gay rights make him totally unelectable. That’s probably why even Republican polls show that Brittany Pettersen is winning this race.”