No GOP ‘Wave,’ But Republicans Could Still Gain Control of U.S. House 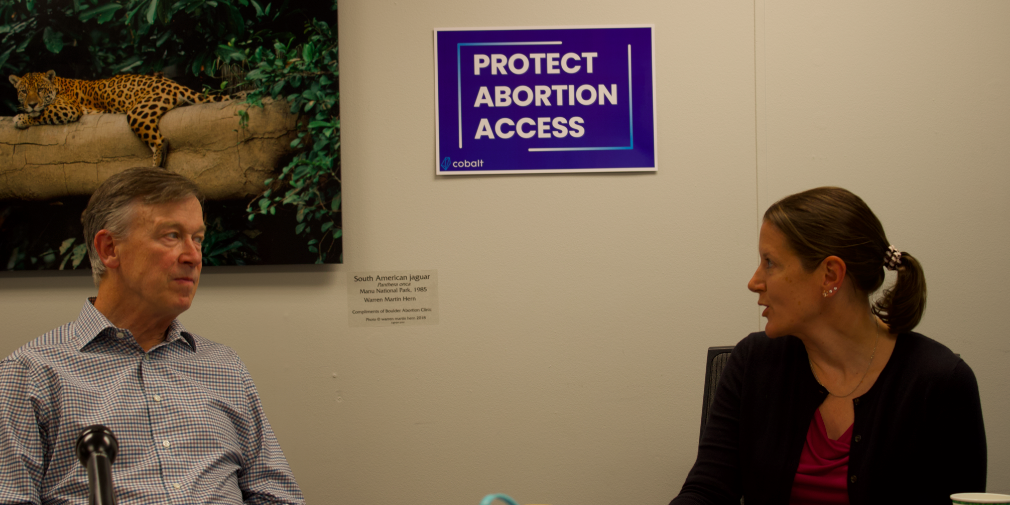 Abortion providers and advocates took part in a round table discussion with Sen. John Hickenlooper (D-CO) on Monday to discuss the impact on Colorado of the Supreme Court’s decision to overturn Roe v. Wade.

“Overturning Roe has meant states like Colorado are under incredible pressure to help patients and providers,” said Karen Middleton, president of Cobalt. “Our abortion fund has seen unprecedented demand for help for both procedures and practical support. In 2021, we spent about $200,000 in procedures and $6,000 in practical support. That was for anyone who asked for help, came to us, or came through a clinic that we work with. So far this year, we’ve already surpassed $200,000 in procedure care already, and $115,000 in practical support. Two-thirds of our practical support funding for out-of-state patients has been for patients in Texas, and we do not expect that demand to slow down. If anything, it may increase as Texas’s full abortion ban takes effect this week.”

Seeking abortion care in Colorado for patients in Texas is a perilous undertaking, medically and legally, said speakers at the round table.

“I think the scariest part for me is these women who are traveling for ectopic pregnancy care,” said Dr. Emily Schneider with the American College of Obstetrician Gynecologists. “You ever drive I-35 from Texas to Colorado? There’s nothing for hundreds of miles. Known ectopic pregnancies in the fallopian tube — if that ruptures, it could be catastrophic. We had a woman pack up her two kids, husband and drove here from Texas, 18 hours, to get ectopic pregnancy treatment. That’s very tricky across state lines because we can treat it medically, but it requires extensive follow up.”

Schneider also noted the impact abortion bans will have on training programs for abortion providers. “There’s absolute despair amongst OBGYNs. They cannot believe this has happened,” she said. “I think there’s going to be decades of OBGYNs that don’t know how to do bread and butter gynecology because 50% of our residency programs are going to be in states where they can’t get this training. Colorado can’t take that on.”

Dr. Kristina Tocce of Planned Parenthood of the Rocky Mountains noted that the abortion bans have exacerbated what was already a staffing crisis for abortion providers. “Everyone in health care is having trouble with staffing right now, but the abortion crisis, and it is in every sense of the word a crisis, is compounding that,” she said. “I think anyone who works in a health care facility now, around this room, will just emphasize that with this massive influx of volumes, even at baseline, before this decision in June, we were struggling to keep nurses on staff, and all other members of the health care team.”

Schneider noted that bans in neighboring states aren’t just impacting abortion care, but contraceptive care as well. “We’ve had a dramatic increase in tubal ligations, hysterectomies, colposcopies, [and] pap smears from women from Montana, Idaho, Texas, Mississippi,” she said. “I mean, they don’t want to seek care in their states. They want to be in a state where they feel comfortable going to an obstetrician.”

The abortion bans in neighboring states are also disproportionately impacting marginalized communities. “Abortion bans and restrictions and barriers to reproductive health care in general fall hardest on people who are facing systemic racism and discrimination, like folks of color, low income communities, queer and trans folks, immigrants and young people,” said Katherine Riley, COLOR’s policy director. “After the fall of Roe, 36 million people, including 5.7 million Latinos across the U.S., lost access to abortion.”

Riley said the impact of abortion bans are also compounded by policies like Colorado’s ban on public funding of abortions. “It’s estimated that one in four Colorado residents are on Medicaid, many of whom are folks of color,” she said. “All private insurance in the state should cover abortion, including those undocumented folks in plans that they can purchase on the exchange.”

Hickenlooper, a co-sponsor of the Freedom to Travel for Health Care Act, blamed the lack of legislative relief for abortion patients and providers on Republicans. “I think in many ways it’s unconscionable in the purest sense of that word, too,” he said of the Dobbs decision, which overturned Roe. “When they did this, it was not a question of their conscience as much as it was their religious ideology or whatever the drives were to cause people to create such chaos and such trouble. … We have a bunch of bills that we’re working on in the US Senate. So far, each bill, whether you’re talking about protecting doctors who provide an abortion in a state where abortion might be questioned, whether you’re talking about people traveling to Colorado to get to access health care, whether you’re talking about people delivering the mail and trying to get an abortion through pharmaceutical [means]. All of those are  elements of laws we’ve worked on in the Senate, and in every case, Republicans unanimously have blocked any effort to provide relief in any form.”

Dani Newsum, Cobalt’s director of strategic partnerships, warned that future Supreme Court decisions could further impact abortion patients seeking care out of state. “The right to abortion was settled law until it wasn’t,” she said. “Well, the right to interstate travel has been settled law. I learned it in law school decades ago, but we have a court majority that has made clear that they’re not necessarily going to respect settled precedent, the right to interstate travel for the purposes of abortion.”

Like Sen. Michael Bennet (D-CO), Hickenlooper doesn’t support measures to expand the Supreme Court or end the Senate filibuster. “Well, I’m not there yet,” he said. “I think it’s important to recognize that this is an issue of profound importance to many people, and it is a question of civil rights. At a certain point, when people begin taking their rights away, they are going to want to get rid of the filibuster. They are going to want to turn the whole thing upside down. I’ve talked to enough Republicans that are very concerned by this same issue that I think we can begin to change the outcomes dramatically, whether it’s getting Roe v. Wade institutionalized through legislation, so that becomes the law of the land, and the Supreme Court no longer has the power to rule on these things. I mean, I think that’s legitimately possible, but it’s going to be hard; I’m not saying it’s going to be easy. And, you know, at a certain point down the road, if we can’t protect people’s rights, then maybe we have to look at what the structure of the Congress, what is necessary. I mean, right now we’re going to have to people voting, right? We’re going to have a nationwide effort to turn out the vote, and make sure people understand what’s at stake. Because look at every poll. American people believe a woman has the right to decide her own health care and when to start a family.”

Bennet is facing a challenge from Republican Joe O’Dea, whose position on abortion has varied. He has claimed he doesn’t support overturning Roe, but would support the nominations of the Supreme Court justices who overturned it, and he said Colorado’s Reproductive Health Equity Act goes too far.

O’Dea has said he supports legal abortions up to 20 weeks, and according to reporting from the Colorado Sun, he voted for Prop 115 to impose an abortion ban in Colorado without exceptions for rape or incest in 2020.

“He’s more moderate than they’ve ever had before because he wants to he wants to ban any abortion beyond 20 weeks, no matter the circumstances,” said Hickenlooper. “If that’s true, that’s not moderate. … He may be out calling himself a moderate because he thinks that word is special and will endear him to certain voters, but a lie is a lie. He is not a moderate person in the context of what Coloradans believe and why.”

Christina Taylor, who moved to Colorado from Texas in 2015, explained how positions like O’Dea’s would harm abortion patients. “In May 2017, I was pregnant for a third time,” she said. “We had bought a house. We were ready to grow our family. We went to the 20-week ultrasound and learned that my baby had no kidneys or bladder and he couldn’t produce or digest amniotic fluid. So we learned that if I tried to carry him to term that he would likely pass inside me, or would probably pass minutes after birth. Now, when receiving news like that, knowing I had the freedom to choose what was best for our family and being able to make that decision without, you know, any time limits or any legislative barriers was just — it meant the world to me. It’s like, you know, it’s like receiving like a bad diagnosis and having good Insurance. You know, it’s not going take the fear away, but you have the emotional energy to deal with it, and that made all the difference.”