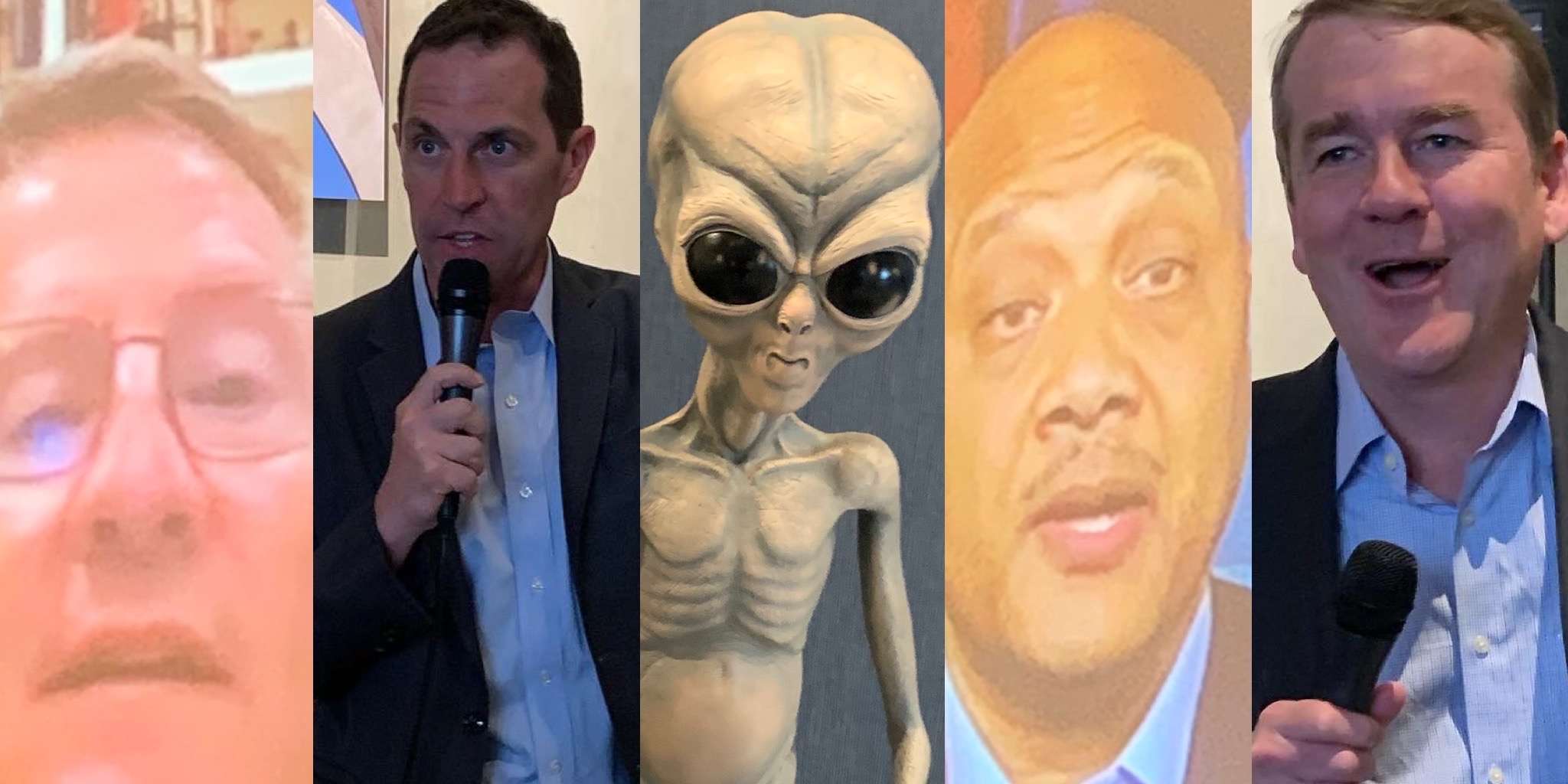 In May, the U.S. House Intelligence Committee held a public hearing on unidentified aerial phenomenon (UAP), or as most people know them, UFOs. The hearing marked a historic shift in how the government has approached the topic of UFOs. No longer are UFOs the subject of ridicule and derision, but a legitimate subject of inquiry for the military and the federal government.

As a sign of the times, two sitting members of Congress — U.S. Rep. Andre Carson (D-IN) and Rep. Tim Burchett (R-TN) — addressed this year’s Mutual UFO Network (MUFON) Symposium, which was held in Denver this weekend.

“I share your goal of learning all we can about unidentified aerial phenomenon,” said Carson in a pre-recorded video for MUFON. “You know, unfortunately, when these issues were discussed in the past, they weren’t taken too seriously, and too often treated with a stigma that many have worked hard to get past. I’m proud to have led our efforts in the House Intelligence Committee to study these phenomena and bring to light information that was ignored for too long. We’ve finally begun the process to take this issue very seriously. From the Defense Department to NASA, government officials have started to really investigate and begin discussing these phenomena. Some of this work will remain classified in the interest of national security, but I’ve been committed to opening up this work to the public. I recently chaired the first public hearing on UAP, and testimony received was a good foundation for the work we’ll continue in the months ahead. I look forward to working with all of you — advocates and activists like yourselves who have paved the way.”

Rep. Jason Crow (D-CO), who serves on the House Intelligence Committee with Carson, says May’s UAP hearings were a step forward. “We’ve made a lot of progress,” he said during a June interview. “It was good to see the open hearing and disclosure last month on the UAP issue. There’s certainly a lot that we don’t know. When you don’t know something, collecting data is really important. Getting information is really important. For so long, the challenge and getting information was stunted because of stigma within the military, within the government, on reporting incidents. That stigma has been dramatically reduced and we’re seeing — as a result of that — a surge of reports from pilots, from military personnel and others about these incidents, which are allowing us to get a much clearer picture of what is and is not happening. We’re making progress there and we’re slowly reducing the stigma, collecting data to get a better sense for what it is we’re dealing with.”

Sen. Michael Bennet (D-CO), who is on the Senate Intelligence Committee, was tight-lipped on the issue when asked about the House UAP hearing following his remarks to the El Paso County Democratic Party in May. “I can’t talk about what I know about that, because I learned it on the Intelligence Committee,” he said. “I’m going to be Colorado’s candidate honoring the requirements of the intelligence committee.”

Colorado MUFON Director Katie Griboski-Paige says recent congressional interest in UFOs is just the beginning. “I do believe that this is baby steps, they’re just cracking the door open,” she said. “Every year, maybe, we’re going to see that door further and further opening up.”

UFO enthusiasts have long demanded greater transparency from the government on the subject. Since Kennth Arnold’s 1947 sighting of nine flying discs over Mt. Rainier, the subject has been shrouded in secrecy, making UFOs ready fodder for conspiracy theorists and confabulists of all stripes. Recently, MUFON has secured the assistance of A10 Associates, a lobbying firm, to bring political awareness to the issue.

“Our executive director, David MacDonald, has been working with Congress and has had several meetings and has actually updated several people on the panels there,” says Griboski-Paige. “MUFON is very directly involved with whats going on there. We’re making big strides and it’s an exciting time for the field.”

Not everyone is as excited with the recent progress at the federal level. For some, it is too little, and long overdue. “Although our culture has been fascinated with the possibility of alien life beyond our own planet, our government has stayed noticeably quiet on the subject, until recently,” said Rep. Tim Burchett (R-TN), who appeared at the MUFON Symposium via Zoom. “Our federal government is now becoming more vocal on this subject, in taking more action to address the many reports coming from members of our military about UAP encounters or UFO encounters. Our federal government should absolutely become more open and transparent about what they know about UFOs. However, it seems to me that our federal government is merely attempting to appear transparent about this without actually providing useful information about what they really know. Instead of giving us helpful information, they’re pumping out useless reports and bogus hearing. They’re doing little to destigmatize the UFO reporting process in our military.”

For UFO diehards like Burchett, a self-described “UFO guy,” May’s UAP hearings were underwhelming.  “The federal government has quietly gathered information on UFOs for decades,” said Burchett. “I could have drawn up [the preliminary UAP report issued in June 2021] in the fifth grade for all the information it gave us. It raised more questions than answers about the unidentified objects in the skies. Of 144 reported encounters between 2004 and 2021, we got an explanation of about one. Just one. Officials said they had ‘high confidence’ that one of these encounters was just a deflated balloon. That leaves 143 by math, other encounters that were not addressed by that report. … Recently, during a congressional hearing in May, this number of possible encounters between 2004 and 2021 also rose from 144 to approximately 400. Eighteen of those moved in ways that seemed to defy known aerodynamics.”

Burchett also expressed frustration at the fact that witnesses for May’s hearing seemed unaware of well-documented, historical cases of UAP incursions over military installations, specifically the 1967 incident at Malmstrom Air Force Base. “The event happened at an Air Force Base in Montana, where 10 nuclear intercontinental ballistic missiles were reportedly shut down without an explanation, moments after soldiers at the base reported seeing an unidentified object in the sky over the base that looked like a glowing red orb,” said Burchett. “In response to Congressman [Mike] Gallagher’s [R-WI] question, Scott Bray, the deputy director of Navy intelligence, simply said, ‘That data is not within the holdings of the UAP Task Force.’ That was his quote.”

Expressing a sentiment shared by many within the UFO community, Burchett suggested that factions within the military are holding onto important secrets related to UFOs. “Unfortunately, I believe there are some at the top who are keeping information from leaving the Pentagon walls,” he said. “I also believe there are folks working within our Defense Department who have a vast wealth of knowledge beyond what the general public knows about UFOs, but they aren’t allowed to share any of that information because of orders from the top.”

Burchett will appear in a forthcoming documentary from MUFON’s Ron James titled “Accidental Truth.” The documentary features government UFO insiders like Lue Elizondo, who worked for the Defense Departments Advanced Aerospace Threat Identification Program (AATIP), the government department exposed by a 2017 New York Times article, and the U.K.’s Nick Pope, who investigated UFOs for the British Ministry of Defence. According to James, the film will expose the U.S. government’s activities between 1969, when Project Blue Book officially ended, and 2007, when AATIP began. The film looks closely at Bigelow Aerospace, a Nevada contractor that was allegedly involved in UFO research.

“A lot of it is put into industry because it’s not FOIA-able,” said Burchett. “You can’t FOIA a private corporation like you can government, so I think that’s where a lot of it is. The crafts — if there is craft, which I think there is, there’s crashes, there’s recovery, the reverse-engineering, you’ve all heard that before — I just don’t think there’s a government entity doing it. I’ve talked to some pilots, they think it’s [Lockheed Martin’s] Skunkworks.”

Burchett’s mention of crash recovery and reverse-engineering are longstanding claims made by UFO enthusiasts, who believe a UFO crashed in Roswell in 1947, or that Bob Lazar was working on UFO projects at Area 51 in Nevada. The military has officially stated that the Roswell incident was a ballon from Project Mogul, which used high-altitude balloons with high-tech — for 1947 — radio equipment to monitor Soviet nuclear tests, and critics have suggested that Lazar greatly exaggerated his connections to Area 51.

For Paul Hynek, whose father, astronomer J. Allen Hynek, worked with the Air Force to investigate UFOs as part of Project Blue Book, the recent congressional efforts at UFO transparency should be viewed with suspicion. “It’s a remarkably different public stance of the Navy than of the Air Force in my father’s day,” he said. “It was basically, ‘We got this, nothing to see here, please disperse.’ Beyond that, I don’t know what to make of it, and franky, I don’t give a rat’s ass what the government says or does. I don’t trust them, and if I was an Air Force General, I wouldn’t release a goddamn thing. Why should I? It’s not my goal to better the world. It’s not my goal to increase knowledge of extraterrestrial civilizations. It’s my job to maintain air superiority.”

Kathleen Marden, the niece of UFO abductee Betty Hill, whose experience made headlines in 1965 and has been the subject of numerous film and TV adaptations, says a conservative approach to UFO disclosure is best.

“I’m very hopeful that we will have slow, limited disclosure because I know the impact that full disclosure could have on the population — not just of this country, but the world,” said Marden, who is the author of six books about UFOs and abduction experiences. “I think the government is doing it the way they should. I’m pleased with what they are doing.”

Burchett urged MUFON members to contact their elected officials regarding UFO transparency. “It’s a good idea to contact them on this issue,” he said. “More people believe in UFOs than believe in Congress.”