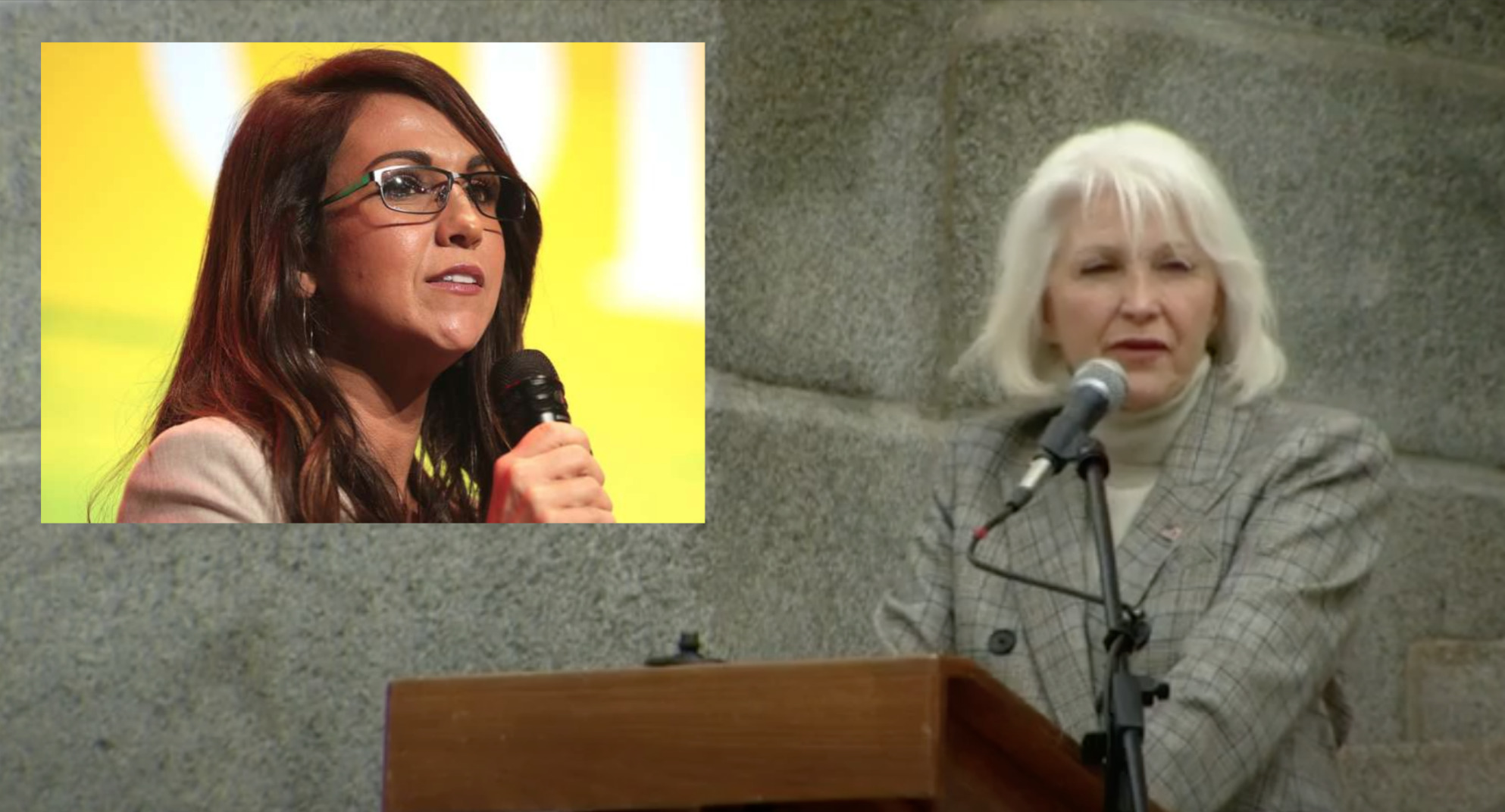 As the U.S. House Select Committee showed the nation that the Trump administration worked closely with extremist groups like the Oathkeepers to overturn the 2020 election, Mesa County, Colorado, Clerk Tina Peters yesterday told a conference of extremist sheriffs that Conan Hayes, the man whom she permitted to copy her county’s election server files, had dinner with her and Congresswoman Lauren Boebert (R-CO) the next day.

“I’m going to tell you one more little tidbit and then I’m going to get off the stage because this is going to bring a lot of house down,” said Peters at an all-day press conference in Las Vegas hosted by the Constitutional Sheriffs and Peace Officers Association (CSPOA) yesterday. “But I believe that if you tell the truth, you never have to worry about what you said.

“The day that the man that came in to do the image on the Mesa County computer, I promised him I would protect his identity because he had just brought down one of the biggest human trafficking rings in the United States, maybe the world. So a liar and a cheat came up and said he would use his identity. And now he’s out there saying, he didn’t even know who I was, but he was flying back on Mike Lindell’s plane after the symposium and all these other things.

“And you know what? You know who else met him? So he did the image on a Sunday. And it was not in the middle of the night. It was in the afternoon after his flight got in. Monday night, he was with me, [former Boebert Campaign Manager] Sherronna [Bishop], one of our candidates for commissioner, and Lauren Boebert! No — don’t clap for her. Do not clap for her!”

For those not familiar with the Clerk Peters election saga, her statement may be confusing, so here’s a brief explanation.

Peters says she promised not to disclose the identity of the man who “did the image,” because of alleged risks to his safety. While various facts reported over the past year have pointed to former surf wear CEO Conan Hayes, who was working for wealthy tech conspiracist Patrick Byrne at the time, as the person who copied the voter files, it wasn’t until a New York Times report on June 26 that Hayes’ identity was confirmed.

In the middle of her story about Hayes and Boebert, Peters briefly mentions another man, the one she refers to as “a liar and a cheat.” That’s Gerald Wood, a local resident whom she vetted to be an IT contractor apparently only to create an office ID badge for Hayes to use.

Peters then returns to talking about Hayes, saying he conducted the imaging of the computer drive on Sunday before dining with her and Boebert on Monday. That timeline matches reporting that the files were copied on Sunday, May 23, 2021.

Reached for comment, Peters declined to elaborate on the substance of the evening’s conversation, but confirmed that Boebert and Hayes met at the dinner which took place in Grand Junction and said there were witnesses.

“Just know this,” said Peters. I got a hug from the Congresswoman and she told me “thank you for what you’re doing. Let me know how it goes.”

Neither Boebert nor Bishop responded to requests for comment. This article will be updated with any responses received. Attempts to reach Hayes for comment were unsuccessful.

Peters also announced that another of her former employees had been arrested on charges related to the election security breach, breaking news since reported by the Grand Junction Sentinel. That story also cites an affidavit from a county investigator naming Hayes as the man who made the disk image, further confirming his identity.

Peters used her former employee’s arrest as the opening hook of her speech at an election fraud press conference in Las Vegas yesterday.

“I’m mad as hell and we’re not going to take this anymore,” said Peters at the CSPOA press conference. “You know what today is? Today is my election manager’s birthday. Do you know where she is? She’s in jail. Our crooked D.A. arrested her yesterday, knowing today is her birthday. She’s in the Mesa County jail right now for impersonation.”

The CSPOA is an anti-government extremist group that uses debunked “sovereign citizen” arguments to claim that local sheriffs have complete authority over their jurisdiction including the power to ignore state and federal laws. CSPOA founder Richard Mack, a former director of the Oathkeepers militia which was involved in the Jan. 6 insurrection, is calling on sheriffs to use their powers to investigate the debunked election fraud claims made by the conspiracy movie 2,000 Mules.

(The video below is the initial audio-only version that appeared in this story, prior to CTR obtaining the new video version published above.)