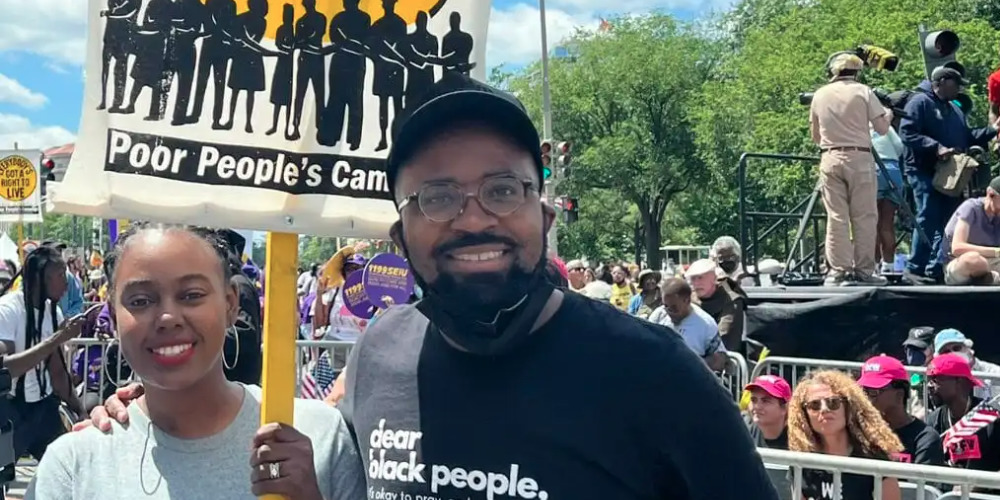 To Reverend Andrew Wilkes, inequality is a dire and immoral injustice. The pastor and political scientist spends every Sunday considering how to build a more equitable economy with his New York congregation.

“From unemployment to health care outcomes, virtually every issue hits poor folks the hardest,” he told me.

As a result, pastors like him have more prayers to shepherd, more funerals to perform, and more concerns to ease — “not because it’s God’s will or because fate declared it,” he said, “but because identifiable policy choices have created burdens on people that should be lifted.”

These choices include the lapse of pandemic-era protections for housing and paychecks, the unrealized necessity of universal healthcare, the prohibitive costs of higher education, and the destruction of voting rights and our environment, he said.

These are choices that “haunt the lives of folk who are of faith.”

A similar cause for mourning? The pandemic’s unconscionable inflation of billionaire wealth,  which has surged by nearly $2 trillion in the last two years.

Our richest are “not only purchasing jets and spaceships,” Reverend Wilkes emphasized. They’re purchasing and capturing our government, which “shrinks the scope of participatory democracy and our autonomy. It’s not okay.”

Wilkes has joined a national, multiracial movement called the Poor People’s Campaign, which aims to organize the 140 million poor and low-wealth Americans for transformative policy change.

The Poor People’s Campaign calls for a moral and political revival to vanquish the interconnected evils of systemic racism, poverty, ecological devastation, the war economy and militarism, and distorted Christian nationalism.

In its visionary Third Reconstruction agenda, the campaign promotes a range of policies — from investment in green jobs and social welfare programs to divestment from war — that would combat inequality from both the bottom up and the top down.

Wilkes said he connects with the “interwoven, indivisible sense of justice” coursing through the campaign’s demands, organizing, and broad base.

Wilkes and his wife and co-pastor, the Reverend Dr. Gabby Cudjoe-Wilkes, recently traveled with members of their congregation to Washington, D.C. for the campaign’s June 18 Moral March on Washington and to the Polls. The march drew thousands of Americans from over 30 states across races, backgrounds, and creeds.

Marches like these build “the kind of density that can exercise pressure in the fall,” Wilkes said. “So that when people take office in January, they know we don’t only want to take pictures. We want to see the poetry of the campaign become the prose of law.”

For Reverend Wilkes, success looks like policy wins — like Congress passing the Third Reconstruction Resolution sponsored by several progressives, some of whom met with poor testifiers at a congressional briefing the week of the march. Wilkes also wants to see modernized living wage laws, federal job guarantees, and voting rights protections.

He hopes to observe incremental and transformational change at once, driven by the Poor People’s Campaign’s ethic of “doing M.O.R.E.” — mobilizing, organizing, registering, and educating — for those with urgent needs.

By the Moral March’s end, thousands of participants had gathered, listened, spoken, sung, and collectively resolved for change. Wilkes felt energized. “It was the revival of inspiration and focused movement direction that our heads and hearts, indeed our souls, needed.”

“I’m taking the songs, policy demands, and inspiration back to New York,” he reflected, “to continue the patient, sacred work — alongside so many others — of organizing, building infrastructure, and collectively pushing for the public goods that all God’s people inherently deserve.”

Bella DeVaan is the research and editorial assistant for Inequality.org at the Institute for Policy Studies. This op-ed was adapted from Inequality.org and distributed by OtherWords.org.