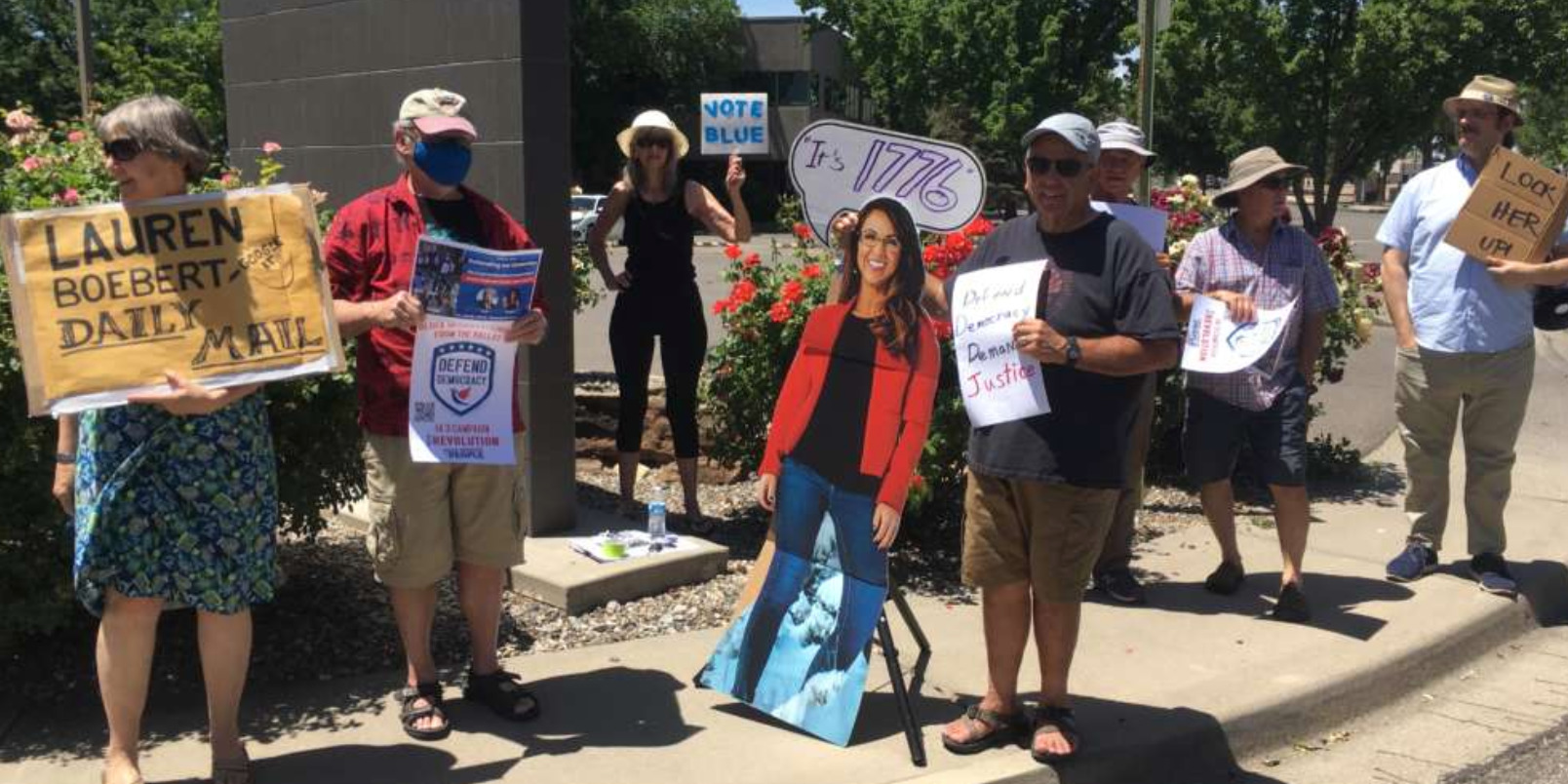 Despite 100-degree temperatures, a dozen people rallied outside the Grand Junction office of U.S. Rep. Lauren Boebert (R-CO) on Friday, calling on Colorado Secretary of State Jena Griswold to disqualify the Silt congresswoman from holding office in the future.

Citing the U.S. Constitution’s 14th Amendment, rallygoers said both Boebert and former President Donald Trump, should be banned from future ballots because of their alleged criminal involvement in the January 6 insurrection when a violent mob of Trump supporters stormed the U.S Capitol.

Our Revolution, a national progressive group founded by Vermont Sen. Bernie Sanders in 2016, is working with local groups around the country to stop elected officials who helped those who tried to block the 2020 Presidential election of Joe Biden.

The effort is called the 14.3 Campaign, which is a reference to section 3 of the 14th Amendment. It allows for the disqualification from reelection of any office holder who swore an oath to uphold the Constitution and “engage(s) in insurrection or rebellion against the (United States), or gives aid or comfort to (our) enemies.”

Our Revolution crafted a letter to be delivered to Griswold asking her to “enforce the Constitution and bar criminal insurrectionists from the ballot.”

“We’re relying on that Constitutional Amendment to insist that officials who participated in January 6, or helped the rioters by their actions, be disqualified from running for office now and in the future,” said Hal Ginsberg, one of two national organizers for Our Revolution. “We recognize the power and obligation of Secretaries of State to protect our democracy.”

Free Speech For People, a nonprofit, bipartisan organization is also helping with the campaign, with similar rallies taking place in Pennsylvania, Ohio, and Arizona.

“We’re in Grand Junction because we identified Lauren Boebert as an insurrectionist running for reelection,” Ginsberg said. “She spread misinformation online, and spoke at the (Jan. 6) rally.”

Local Grand Junction organizer for Our Revolution Scott Beilfuss called attention to a tour of the Capitol that Boebert led the day before the riot – after she had sworn an oath to protect the country against both foreign and domestic enemies.

Then, on January 6, while inside the Capitol hiding along with other lawmakers, Boebert texted “Today is 1776.”

Perhaps most disturbing is when Boebert tweeted: “Nancy Pelosi has left the chamber.” Boebert obsessively mentions the House Speaker when criticizing the Biden administration.

“Who was she talking to when she tweeted that?” Beilfuss asked.

Beilfuss shared photocopies at the Grand Junction rally of a photo that state Sen. Don Coram, who’s challenging Boebert in the June 28 Republican primary for the nomination to represent the party in November’s election for the 3rd Congressional District seat, had tweeted earlier in the day.

The photo shows Boebert posing with local members of a far-right anti-government group, with several people in the photo flashing a hand signal associated with a white nationalist Alt-Right movement.

Political blogger and Grand Junction resident Anne Landman also attended the rally. She cited govtrack.us –- a nongovernmental website that publishes the status of federal legislation, information about representatives and senators in Congress, including voting records. The site has listed Boebert as one of the insurrectionists on January 6.

Landman also told the gathering that Boebert aligns with Russian President Vladimir Putin and that on March 17, Boebert voted with the minority, in a 428-8 vote, against revoking normal trade status with Russia over its unprovoked, ongoing war with Ukraine.

“This is the first time in my life and I lived through the sixties,” she said. “I feel so much anger about what’s going on. It hurts inside. She (Boebert) scares me.”