Gardner says “White House does have a little bit more of an uptick, but I don’t think there’s chaos” 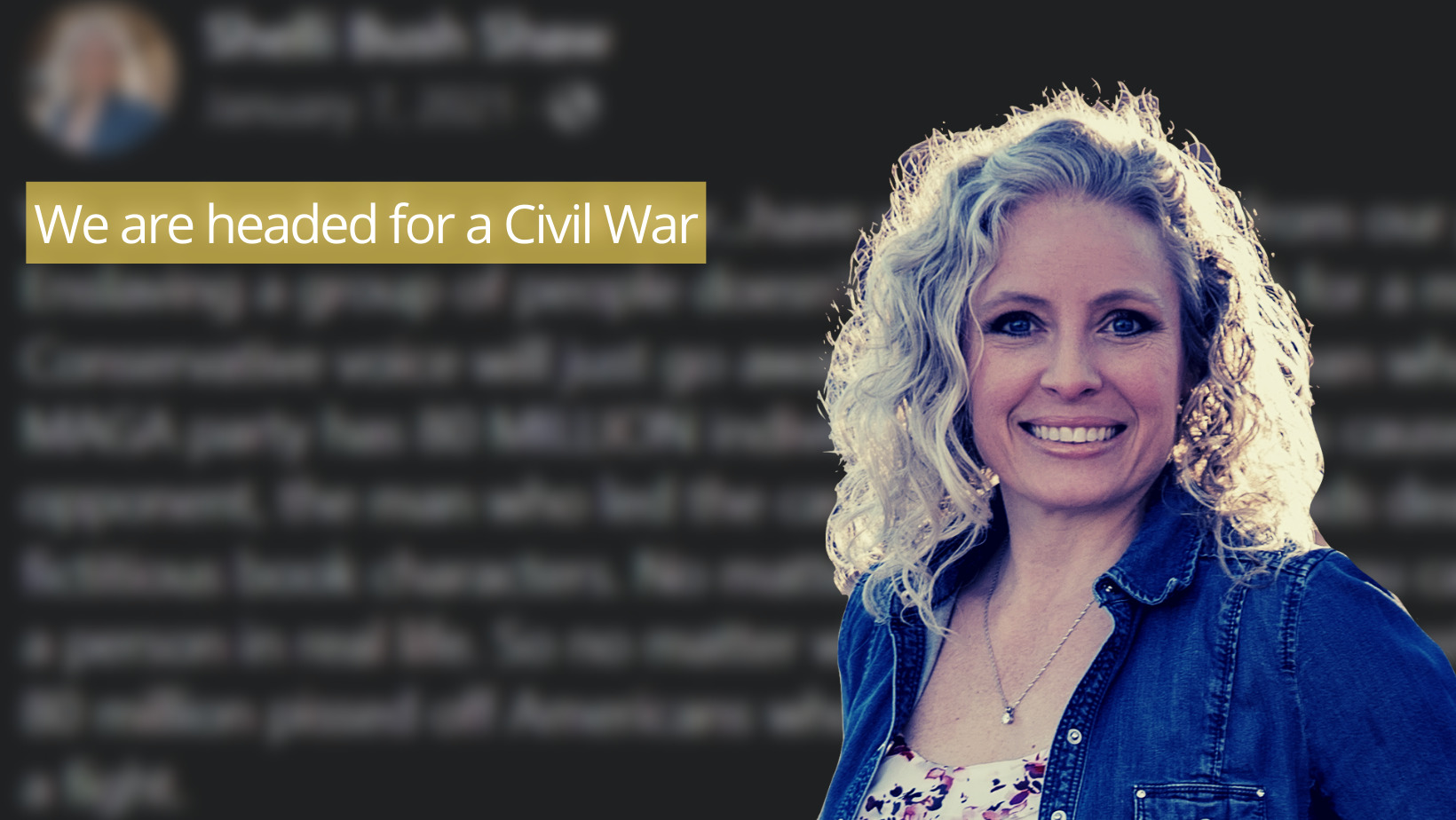 The Blue Spruce Bed & Breakfast sits nestled among the conifers of southern Colorado, looking out over the San Juans from a few miles northeast of Durango. Its owner, Shelli Shaw, believes that Joe Biden stole the 2020 presidential election from Donald Trump, and that it was Antifa and BLM activists who attacked the U.S. Capitol on Jan. 6, 2021. She feels that a second American civil war is imminent — and in November she may be elected to public office.

Shaw, the presumptive Republican nominee for House District 59, shared these beliefs on her personal Facebook page in the months following the 2020 election and the violent assault on the Capitol. Then –- some time in the spring of 2022, around when she declared her candidacy for the state legislature -– she deleted them.

The seat Shaw is seeking in the statehouse has a long history as a partisan battleground. Between 2010 and 2016, the district switched hands between Democrats and Republicans three times before incumbent Democrat Rep. Barbara McLachlan put an end to the flip-flopping and won three consecutive terms. McLachlan, who taught high school in Durango for more than 20 years, is running for reelection to her fourth and final term in November. This time around, though, thanks to the once-per-decade redistricting process, McLachlan is facing longer odds. The map drafted in 2021 by the Colorado Independent Redistricting Commission removed Democrat-friendly Gunnison County from the mix, and added the more conservative Montezuma County. Now, the district has more Republicans than Democrats, and more unaffiliated voters than either. According to an analysis released by the commission, the new version of HD-59 is about 30% Republican, 26% Democratic, and 42% unaffiliated.

That last group might pose a problem for Shaw, who is on the record with some less-than-moderate views.

“Apple is going to do an update on all phones to shut off the emergency broadcast system. This is Nazi Germany 1938,” Shaw posted to her Facebook on Jan. 9, 2021, advising readers to turn off their phones’ auto-update setting.

As is probably clear by now, Apple did no such thing. Rather, Shaw was sharing a baseless claim which seems to have originated with former Trump lawyer Lin Wood –- who now faces disbarment for his role in the former President’s efforts to overturn the results of the election in several states.

The post is one of several that Shaw has since scrubbed from the social media site.

On the same day that she shared the claim about Apple shutting off the emergency broadcast system, Shaw published a since-deleted post about the Capitol insurrection, in which she expressed her belief that “Antifa, BLM activists, and anarchists” were behind the deadly riot and claimed that “an anarchist” had already been arrested for participation. The following week, Shaw doubled down on the claim, sharing an image that characterized the insurrection as having been staged by “the left” in an attempt to seize control of the government. Both posts have since been deleted.

These “false flag”-type claims were common during and in the aftermath of the attack on the Capitol but have also proven false. Hundreds were indicted for their participation in the day’s activities, many of whom have proudly clarified that they are not “Antifa” but Donald Trump supporters. They were there to overturn the results of the November election in which former Vice President Joe Biden unseated incumbent Trump by more than seven million votes.

On January 7, the day following the riot, Shaw took to Facebook with an even more incendiary claim: that a second American civil war was imminent.

“We are headed for a Civil War,” Shaw warned. The post, which seems to compare conservatives to the slaves who were emancipated as a result of the actual Civil War, hits many of the talking points of what has become known as the Big Lie.

“Enslaving a group of people doesn’t work. If you think for a minute the Conservative voice will just go away, think again,” she claimed in the post, which indicted “dead people” and “falsified records” for Biden’s victory and finished with the warning that “80 million pissed off Americans…will not give up their freedoms without a fight.”

Shaw has deleted the post which warned of civil war, but she stands by the warning. In an interview with the Colorado Times Recorder, Shaw — who, like McLachlan, is a former educator — reiterated her beliefs about the 2020 election and the threat of domestic turmoil.

“If I did delete it, it wasn’t because I don’t believe it,” Shaw said, noting that she could not remember whether or not she had deleted the post. “There were eighty million people who were very upset during the 2020 election. I still believe that that’s the case. Because eighty million people felt like their voice wasn’t heard.”

Asked about her concerns surrounding the 2020 election, Shaw held to her convictions. “I have seen evidence of fraud,” she said.

And the problem, according to Shaw, is not just at the national level. She has concerns about the election processes in southwestern Colorado as well. She worries, among other things, that the voter rolls are seriously flawed, and that ballots may have been cast by “dead people” and those who have moved out of the state.

“Right now, our voter rolls aren’t as clean as they could be,” she said in our interview. “There’s a lot of cleanup we could do.”

The potential for these claims to be a political liability seems to have occurred to Shaw, given how many of her Facebook posts have been deleted in the past two months. Still, when reached by phone, Shaw did not shy away from the positions she took online: not only does she still believe in the Big Lie, it’s why she’s running for office in the first place.

“I think that the 2020 election plays greatly into the 2022 [election], because, if we don’t shore up our election processes, it won’t matter what happens in 2022,” she said. “Right now, people feel like they don’t have a voice, and that creates unrest. That’s why I got involved.”

The beliefs Shaw shared are not uncommon among conservatives. Recent polling shows that up to 83% of Republican voters believe Joe Biden’s victory in the 2020 presidential election was fraudulent.

Despite broad acceptance at every level of the GOP, though, the positions shared on Shaw’s Facebook page remain politically toxic with independent voters, 70% of whom believe Biden’s victory was legitimate. According to a poll from December 2021, 62% of Republican voters believe there is “solid evidence of widespread voter fraud,” while only 22% of independents feel the same way.

While the importance of appealing to moderate swing voters is generally overstated, it will be crucial in the evenly split southwestern district if Shaw hopes to secure a victory in November. It is an experiment that will be repeated in hundreds of districts around the country in the midterm elections, as the ever sought-after, if often fictional, swing voters of America have their first opportunity to weigh-in on the Big Lie at the ballot box.

The claims of the Big Lie are demonstrably false. There was no widespread voter fraud–and the few individuals who have been charged for individual acts of voter fraud in the 2020 election were Republicans. Nevertheless, the polling booths will not be wallpapered with fact checks, and people’s voting behavior — often thought of as fundamentally rational — is driven largely by emotion.

It matters less, then, that the claims are false than that tens of millions of people believe them to be true. Shelli Shaw got that part right. “I believe that people who believe in the Constitution, and those that believe in the Bill of Rights, are not going to go down silently,” she said in our interview. “They truly believe in this country.”

It’s all about belief.

And in November, voters in four counties in southwest Colorado will get to choose whether or not they believe in her.