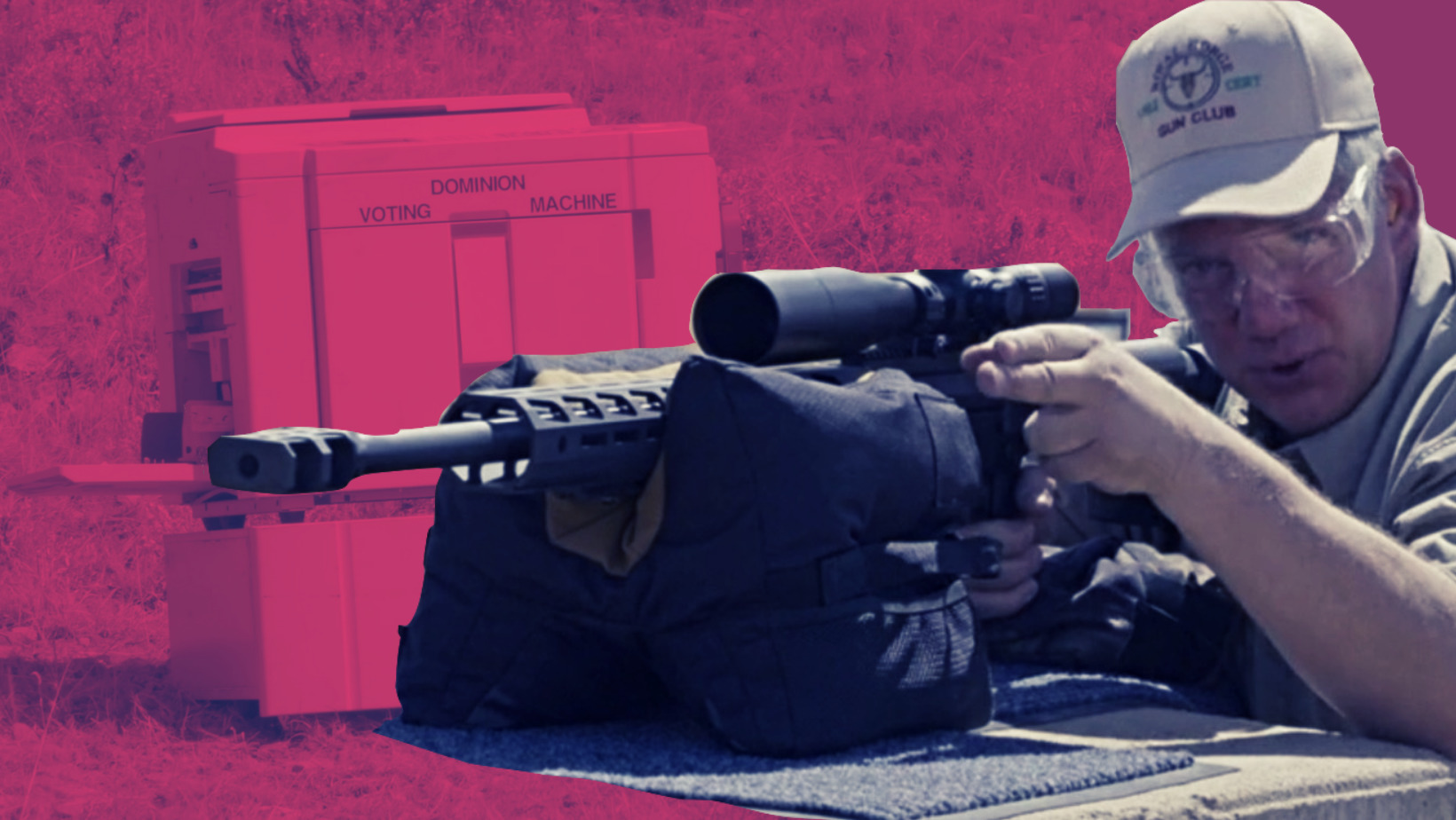 In a move rarely advised by campaign consultants, a Republican candidate for the U.S. Senate may have confessed to a serious crime — at least that’s how it appeared in a clip circulating online.

The seeming admission by Ron Hanks–who currently serves as a member of the Colorado House of Representatives and is seeking the GOP nomination to challenge Sen. Michael Bennet in November–was made in a speech on the floor of the House chamber last week.

“I know America’s voting machines are vulnerable,” Hanks says in the clip, “because my colleagues and I have hacked them repeatedly, as part of a decade of research studying the technology that operates elections and learning how to make it stronger.”

It was initially unclear what Hanks was referring to in the clip, which captures a brief section of a nearly seven-hour debate in which Hanks personally spent multiple hours speaking from the podium and was repeatedly gaveled-down by the presiding officer for breaches of the chamber’s rules of decorum.

A transcript later provided to the Times Recorder, though, shows that Hanks was quoting something written by Professor Alex Halderman of the University of Michigan. If Hanks was hoping for an expert to argue in favor of his voting machine conspiracies, though, he is out of luck: Halderman, who serves on Michigan’s Election Security Advisory Commission, is best known for his work debunking exactly the kind of claims Hanks made about voting machines throughout his hours-long speech in opposition to an election security bill.

Hanks, who seems to be the frontrunner in his bid to secure the Republican nomination for one of Colorado’s two U.S. Senate seats, is no newcomer to claims of election fraud. The Penrose Republican first made headlines for his participation in the January 6th insurrection at the U.S. Capitol building, which occurred days before Hanks was due to begin his first term in the state legislature. Since then, claims of election fraud have been Hanks’ bread and butter as both a legislator and a candidate.

In July 2021, Hanks traveled to Arizona to witness the unofficial recount of presidential ballots in Maricopa County. Hanks has also been actively involved with the United States Election Integrity Plan, or USEIP, an election conspiracy group seeking proof for the false claims of election fraud in Colorado. USEIP has previously made headlines for claims of armed voter intimidation, and for being the animating force behind now-infamous Mesa County Clerk & Recorder Tina Peters’s decision to compromise her own county’s voting machines based on baseless and debunked claims of fraud. Peters now faces the prospect of jail time after being indicted on multiple felony charges as a result of her actions.

During last week’s debate in the statehouse, where Hanks made the claim about hacking voting machines, he also read long sections from USEIP’s “forensic audit” of Mesa County voting records, a report which was based on flawed analyses of the records Clerk Peters is accused of stealing from Mesa County’s voting equipment.

Despite–or, perhaps, because of–his connection to Peters, Hanks’s campaign for the Senate nomination is going well. Though his opponent, Joe O’Dea, has significantly more cash-on-hand than Hanks, Hanks took the top slot at the GOP’s state assembly and has won multiple straw polls of Republican voters throughout the nominating process.

Hanks is not the only extreme candidate hoping to lead the Colorado GOP to victory in November: Tina Peters is the frontrunner for the Republican nomination to be Colorado’s next Secretary of State, which would give her oversight of the state’s elections–even though a judge has barred her from administering the elections in the county where she is currently elected to do so.

Back in February Hanks and Peters also participated in an election conspiracist event convened by FEC United, the extremist group with its own militia, at which USEIP leader Shawn Smith told an enthusiastic audience that Griswold deserves to hang if she’s guilty of the election crimes he insists without evidence that she has committed.

The reason candidates like Hanks and Peters are dominating Republican primaries is simple: their extreme views are perfectly aligned with views held by Republican voters. Recent polling shows that up to 83% of Republican voters believe that Joe Biden’s victory in the 2020 presidential election was fraudulent.

As for Hanks’s claim of hacking voting machines, that remains unclear, and his campaign did not respond to a request for comment. If indeed the claim turns out to have been less than it seemed, it would not be the first time Hanks has been confused about what constitutes a “voting machine.”

Perhaps the Republican candidate, as in the case of the video announcing his candidacy for U.S. Senate, was thinking of a photocopier.

This story has been updated to reflect that Hanks was quoting professor Alex Halderman.