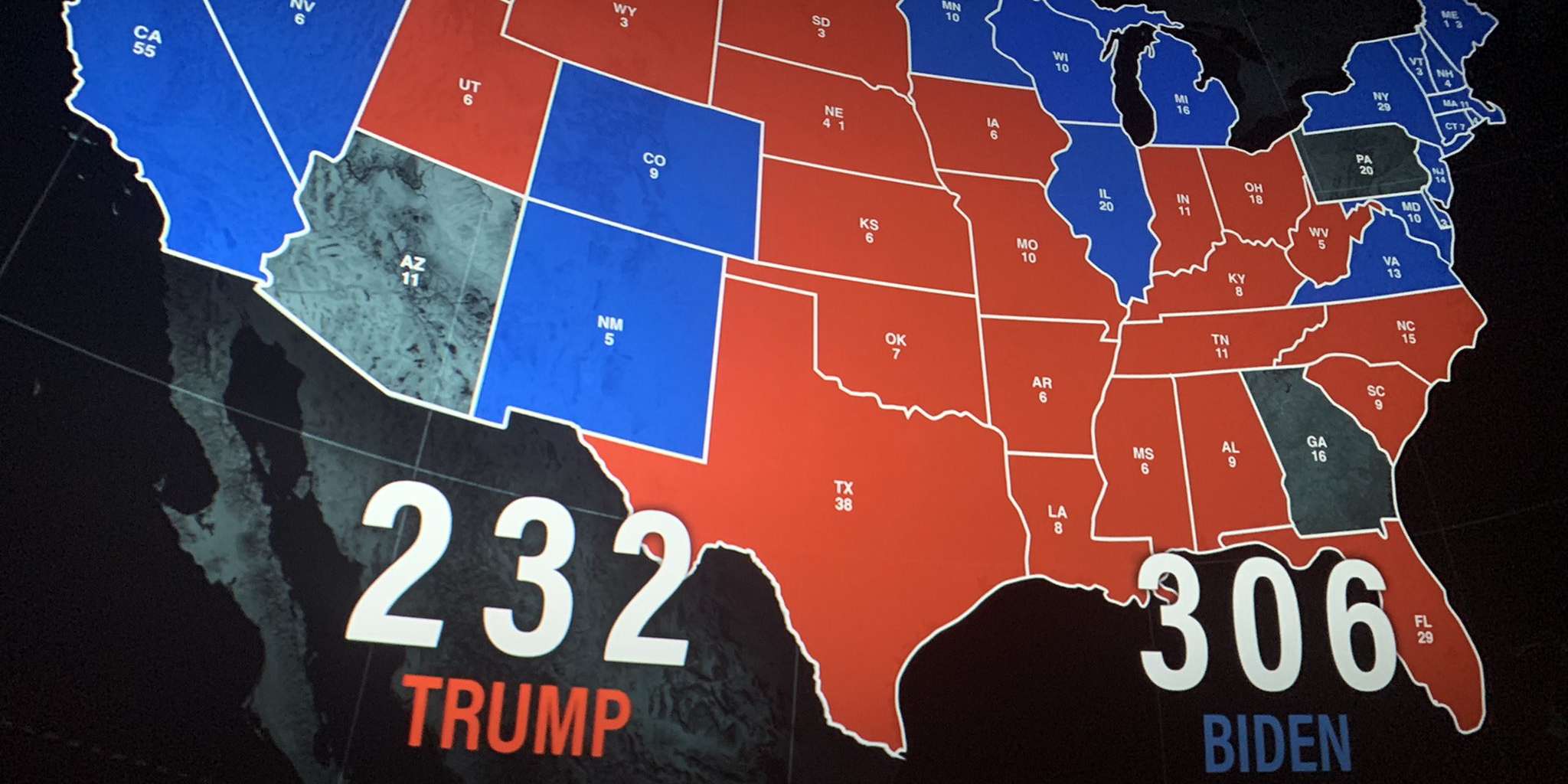 It was a packed house at the Cinemark Tinseltown theater in Colorado Springs for Monday’s premiere of conservative commentator Dinesh D’Souza’s new film, 2,000 Mules. D’Souza’s film is the latest attempt by conservatives at questioning the integrity of the 2020 presidential election, which has been the subject of numerous forensic audits — that failed to show evidence of fraud — in states like Arizona and Michigan.

“So there are two independent lines of evidence obtained by the election intelligence organization that’s called True the Vote,” said D’Souza told KNUS radio host George Brauchler, during a May 2 on-air discussion of the film. “They got a giant amount of cell phone geo tracking data. This is the data that shows the movement of cell phones. And they bought the data from October 1, 2020, through the election. Now they sort of this data, they ran a kind of a search algorithm looking for these mules. Now, what’s a mule? A mule is a paid political operative, typically hired by a left-wing organization to dump fraudulent and illegal ballots into mail-in drop boxes, typically in the middle of the night. … Catherine Engelbrecht of True the Vote coined the term and when I say ‘coined’ it as she lifted it from, you know, drug trafficking and sex trafficking in human trafficking where the mule is kind of the go-between. So she basically just applied the term to this area to ballot trafficking in which we have people doing exactly the same thing. They’re serving as mules.”

D’Souza, who was pardoned by Donald Trump in 2018 for a 2014 campaign finance violation, claims that a shadowy network of nonprofits used paid ballot “mules” to distribute enough false ballots in battleground states to swing the results of the 2020 election.

This is simply the latest conspiracy theory to be trotted out for conservative audiences that can’t get enough relitigation of 2020.

The leading theory, pushed by Colorado’s pre-eminent election conspiracist and Metaxas’s co-defendant, Joe Oltmann, is that software in Dominion voting machines was used to flip votes from Republicans to Democrats during the adjudication process. Rep. Ron Hanks (R-Cañon City), who is currently the Republican frontrunner for U.S. Senate, claims “communist China” is behind the Dominion vote-switching. Hanks has also suggested the ballots themselves might be faulty, questioning the integrity of Arizon-based Runbeck Election Services. Failed inventor and History Channel personality Jovan Pulitzer developed “kinematic artifact detection” to check Arizona ballots for bamboo, since apparently the communist Chinese operatives can’t help but leave trace amounts of the Asian plant behind. Neither of these theories have panned out, but that didn’t stop D’Souza from continuing in the conservative efforts to undermine American faith in democracy.

D’Souza used surveillance footage of individuals dropping ballots off at drop boxes throughout the film. “​​True the Vote obtained 4,000,000 minutes of official video surveillance [footage],” he told Brauchler. “So we’re not just looking at your cell phone moving from Dropbox or drop box to drop box. Let’s say it’s my cell phone at 3 a.m. in the morning, but then you go look at one of the drop boxes that happens to be under surveillance video and whoa, there’s Dinesh. And what’s he doing? He’s wearing a hoodie. He’s looking from left to right to make sure no one spots him, whips out his backpack. He’s wearing gloves so as not to leave his fingerprints on the ballot. You see him dumping the ballots, one, two, three, four into the Dropbox. Then he takes a photo, not a selfie, but a photo of the ballots going in. Why? Because that’s how the mules get paid. And all of this is on video camera. So the beauty of this movie is it’s not just assaulting something. We make you an eyewitness to the scene of the crime. You can actually see this illegal network of ballot traffickers operating in these key states.”

Unfortunately, 2,000 Mules doesn’t show footage of any of the individuals at multiple locations. We’re shown single footage of a guy on a bike, who takes a photo of his bike in front of the ballot box, but we don’t get to see bike guy at any other locations. We see a woman in a mask and latex gloves — during the height of the global pandemic that has killed nearly a million Americans — dropping her ballot in a box and then removing the gloves, but again, no additional footage.

When Brauchler pressed him on this point, D’Souza said not all the drop boxes were under surveillance. “The reason for it is this: You wouldn’t normally find them, right?” he said. “Because let’s face it, for example, your geo tracking shows a guy going from one drop box to another to another. That guy should be on the surveillance video of all of those drop boxes, but here’s the problem: Many of these states did not put in surveillance video at all the drop boxes there. They’re supposed to. They said they would. The election rules say they should, but they all pleaded, ‘Well, we didn’t get around to it.’ So what happens is we have a lot of video, but it’s not video everywhere. And so the kind of case that you’re looking for, which we could settle if we had all the video, but we have letters … We have letters from the State of Georgia, ‘Sorry, we don’t have that video. Sorry, we don’t have that video.’ So it’s the negligence of the states that is to blame for the inability to be able to track a single mule on video going to multiple drop boxes.”

The film also extensively relies on anonymous “whistleblowers” who claim the ballot muling is organized and widespread. “​​We know they’re paid for two reasons,” said D’Souza. “The first is that whistleblowers have come forward in Georgia and Arizona that describe to True the Vote that they were paid by ballot traffickers. They pointed out that they were paid $10 a ballot. The guy in Georgia said he was paid more for the runoffs. He was rehired to do more ballot trafficking in the Georgia runoffs that followed the November 2020 election. So the whistleblower laws were the origin of this whole project because it’s like, you know, were you the only guy? No, no. There are tons of people doing exactly what I did. Well, okay, let’s buy the geolocation data to see if we can prove it. So that’s the first line of proof. And the second one is the taking of photos at the scene of the crime. I mean, ask yourself this what possible reason could there be for a mule going to a drop box typically at night to take photos not of himself, not a selfie like I voted, but of the ballots going in. If not to show I was there. I did the job. I need to get paid.”

D’Souza’s film also claims these efforts are being pushed by nonprofits, but the film doesn’t provide an extensive list of the organizations. 2,000 Mules mentions Zuckerberg funding, likely a jab at nonprofit Center for Tech and Civic Life (CTCL), who is oft-cited in election conspiracy circles. Pam Anderson, a board member of CTCL and candidate for Colorado Secretary of State, has been the subject of attacks from Mesa County Clerk and Recorder Tina Peters, who is challenging her in the primary.

In March, CTCL told the Colorado Times Recorder, “These types of claims about CTCL are the same arguments that have been rejected by every judge – conservative, liberal, and two Republican-appointed Supreme Court Justices — that has heard them, including one judge who described them as a ‘conspiracy theory.’ Further, Pam is on a leave of absence from the board.”

The film’s Colorado showings are sold out, but viewers can stream it at home starting May 7, although we don’t recommend it.