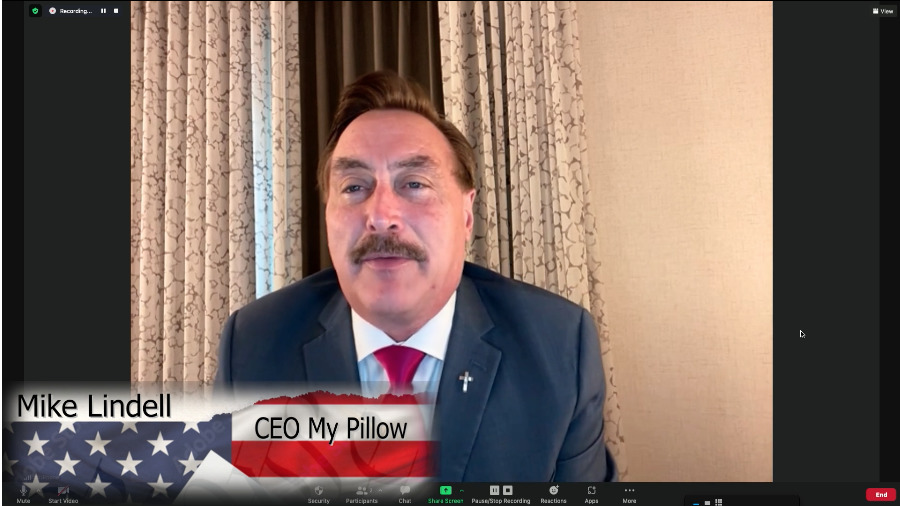 Earlier today, a Mesa County grand jury indicted Clerk Tina Peters on ten felony and misdemeanor charges relating to the leaking of secure election data, but that hasn’t dissuaded MyPillow CEO Mike Lindell from supporting her. Lindell says he still endorses Peters and that he will “one hundred percent” campaign for her in Colorado, saying “the people want Tina Peters! I’ll be out there sooner rather than later.”

Asked by the Colorado Times Recorder if he planned to help Peters post the $500,000 cash-only bond, Lindell said he couldn’t say as he was only just learning about it, but mused that the judge who set the bond amount “is probably crooked.”

Peters faces up to nearly three decades behind bars, but Lindell says it’s all a cover-up.

“She’s wrong,” said Lindell. “[Chairwoman Brown] should worry more about having voting machines in Colorado than making recommendations about who she thinks should run. The GOP should ask what the people want. They want common-sense politicians who are not corrupt. What the people want in our country, we want people like TP that stood up to Dominion and the election crime of 2020. Everyone in this country knows the election was stolen. If we don’t fix 2020, we’ve lost our country.

Asked whether he planned on endorsing other Colorado Republicans currently campaigning on a platform of claiming the 2020 election was stolen, Lindell demurred, saying he’s only endorsed a handful of top statewide candidates so far. In addition to Peters, he listed Attorney General candidates Ken Paxton in Texas and Matt DePerno in Michigan, as well as Arizona gubernatorial hopeful Kari Lake. “These are all people that one thing in common: they’re trying to save our country.”

Excluding Peters, Lindell’s candidates have one other thing in common: they’re all been endorsed by former President Trump, who has yet to take a position on any of the Republican primary candidates in Colorado.

Lindell also said he’s working on a variety of legal actions intended to reveal the supposed fraud of the 2020 election.

“Over the next three weeks, you’re going to see lots of things come out criminally against people, including some filed in Colorado. You’re also going to see things filed against Dominion and all the machines. They’ll be lawsuits coming out there, that all the [voting] machines are defective. The Supreme Court complaint is going to be coming out with the Attorneys General. March is going to be one of the most amazing months ever — it’s going to be looked back on in history.”

Peters wasn’t the only one indicted today; the grand jury also charged her deputy, Belinda Knisley, with several felonies as well.

As of late this afternoon, Knisley has turned herself in to the Mesa County Sheriff’s Office.

UPDATE: Just after 4:00 p.m. the Mesa Sheriff announced Peters turned herself in.