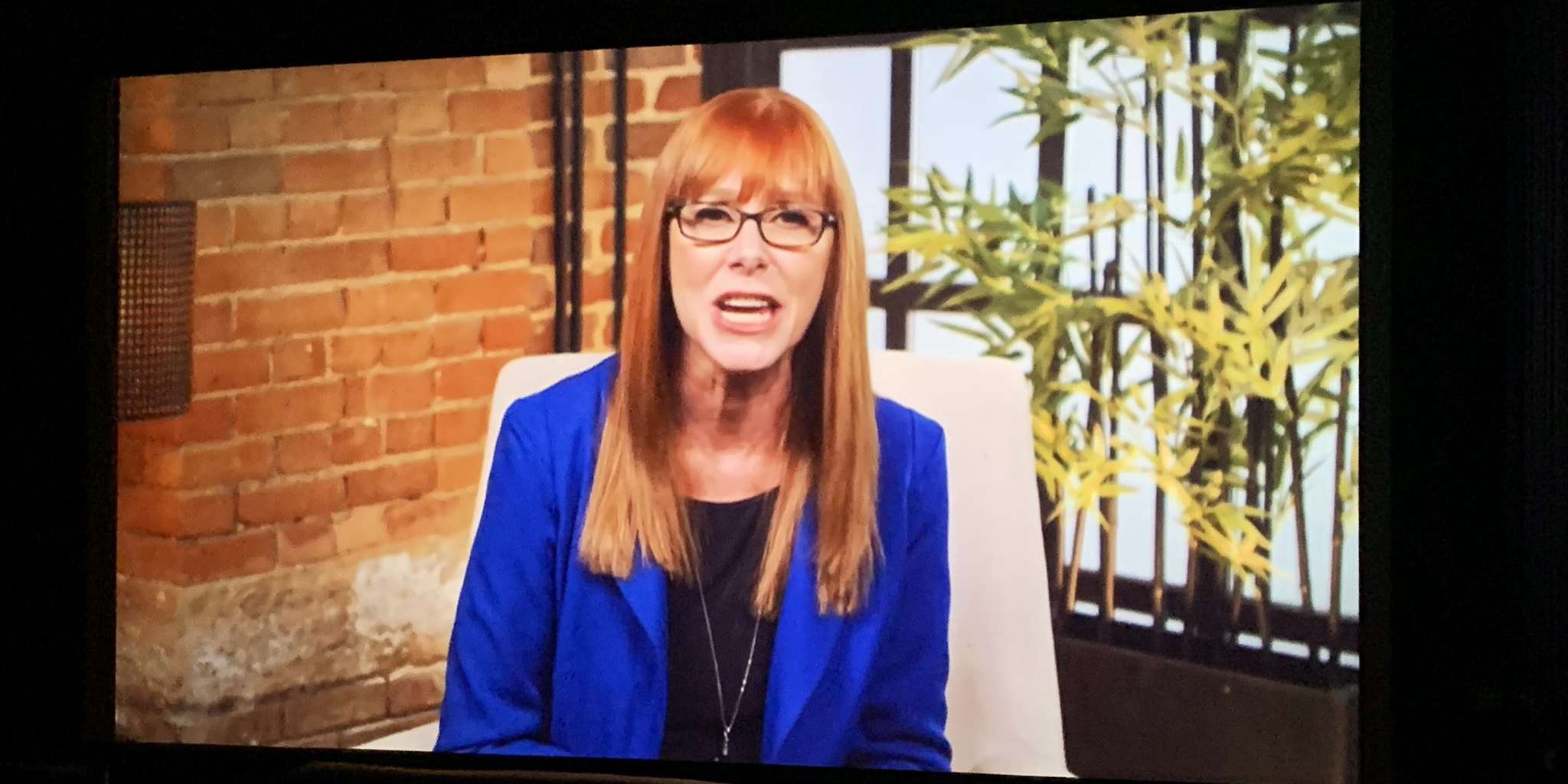 Public education and its consequences have been a disaster for parents, at least according to Colorado Senate candidate Deborah Flora’s new film, Whose Children Are They?

Flora’s movie picks up where 2010’s Waiting for “Superman” left off, attacking public schools and teachers unions, but incorporating every battle from the culture war in the last two years, while injecting a healthy dose of anti-communist hysteria into the equation.

“We’ve been working on this film for two years, and it’s over 100 hours of footage of 80 interviews, its frontline experts, brave parents, caring teachers, you know, courageous students,” said Flora during a March 9 appearance on The Steffan Tubbs Show.

The experts appearing in Whose Children Are They? include Bob Schaffer, a former GOP congressman and failed U.S. Senate candidate, headmaster of charter school Liberty Common High School, and chairman of the Leadership Program of the Rockies, a conservative training program; Max Eden of the Manhattan Institute, the conservative think tank founded in 1978 by William J. Casey, President Ronald Reagan’s CIA director; Rebecca Friedrichs, a former teacher turned anti-union advocate who spoke at the 2020 Republican National Convention, as well as local conservative pundit Jimmy Sengenberger, parents, students, and a “Mao survivor.”

The film begins with Flora, a former talk radio host, mentioning “Cultural Marxism,” a favorite talking point of right-wing faux intellectuals like Jordan Peterson, which also happens to be an antisemitic conspiracy theory. According to the Southern Poverty Law Center, “In a nutshell, the theory posits that a tiny group of Jewish philosophers who fled Germany in the 1930s and set up shop at Columbia University in New York City devised an unorthodox form of ‘Marxism’ that took aim at American society’s culture, rather than its economic system.”

Those raising red flags — no pun intended — about the dangers of Marxism in public education, in addition to the “Mao survivor” Xi Van Fleet, are Cuban exile Marilyn Salabarria and Romanian Gheorge Rhossa. Schaffer mentions the early connections between the Communist Party, education pioneer John Dewey, and the villain of Whose Children Are They? — teachers unions.

“It has to do with what the teachers unions are pushing, who they partner with, which are a lot of people with indoctrination agendas that have absolutely nothing to do with education,” said Flora on Tubbs.

In Colorado, the primary teachers union is the Colorado Education Association (CEA), which has 39,000 members across the state. Despite decades of declining union membership across the country and across industries, the CEA is the largest union in Colorado, and the National Education Association, the CEA’s parent organization, is the largest union in the country.

“I think what we’ve seen over the last year to two years, in particular, is just the politicization of many of our institutions that haven’t been as politicized in the past, and public education clearly has not been immune to that,” says CEA President Amie Baca-Oehlert. “I think that when we saw things throughout COVID, like science, being politicized, that has infiltrated its way into our public schools, and I think the union — who are the teachers, who are the educators, by the way — has gotten caught in that because we are standing up to ensure that facts are being told, there’s truth and honesty in our education, so we are now embroiled in that debate that’s happening across our country.”

Flora’s film hopes to fan the flames of that debate, addressing the hot-button controversies that erupted in Board of Education meetings across the country during the November 2021 elections. Flora herself was a part of parent activism in Douglas County, one of the many counties in Colorado that saw a new conservative majority voted in.

“It all began really about three years ago when I started Parents United America and I began to advocate for parents’ voices because we were getting shut out,” she told Tubbs. “Jonathan [Flora, husband, and director of Whose Children Are They?] and I talked about it and we thought, ‘You know what? We are documentarians. One of the best things we can do for this movement for educational freedom, for parental rights, and for the innocence of children is to drag it all into the light and then allow good parents, children, students, teachers, concerned citizens to stand up together.’ And that’s the point of it. It’s a grassroots effort. It should be. But our job is to help people connect the dots because, you know, a lot of times too often we hear one story here or it’s just about sex ed or it’s just about therapy or just about, you know, discipline issues or whatever. We want to make sure everybody knows it’s all connected and there’s something we can do about it.“

Baca-Oehlert notes that many of the arguments made in the film, particularly those about critical race theory — which isn’t being taught in Colorado public schools — and social-emotional learning, which according to the film is just critical race theory in disguise, are inaccurate and disingenuous. “These things just seem to be distractions and red herrings,” she says. “What we teach in K-12 education here in Colorado is an honest and accurate teaching of our history. We follow the approved state standards that are adopted by the state, and then follow the curriculum that is adopted by our local boards of education. This is just something that, frankly, is a talking point to rile people up. The majority of Coloradans know, understand, and believe that we should — and do — teach an honest and accurate teaching of our history.”

Not only does Flora’s film blame unions for critical race theory, but it also claims that the unions conspired with the Centers for Disease Control to keep students out of classrooms and in masks.

“From the very get-go of the pandemic we were talking about the value and the importance of in-person learning,” says Baca-Oehlert. “We know that that is what is best for our students as well as our educators, but we were also consistently talking about that we needed to do that in the safest way possible. We were following the science, and that is what we advocated for, that’s what we will continue to do. Throughout the pandemic, we were supportive of safety mitigation strategies that would allow for consistent in-person learning. We know and understand the impacts of that disrupted learning. We were advocating for those things to be in place that were going to A, allow for in-person learning and then B, allow for it to be consistent because again we know the back and forth and the switching from in-person to remote learning was disruptive to our students and our educators alike. That is what we advocated for and will continue to do so, as we’re not out of this pandemic yet. Kind of a revisionist history of what was really happening from the union’s position.”

Masking and critical race theory pale in comparison to the dangers students face from comprehensive sexual education, according to Flora.

During the film, speakers complained that materials were too graphic and that lessons incorporating or affirming LGBTQ identities were a form of grooming.

“This is a place where it’s just not accurate what they’re saying about what really happens in our schools,” says Baca-Oehlert. “We teach the approved standards that are developmentally appropriate, at the grade levels in which they are taught. We will always advocate and stand by ensuring that our schools are a safe place for all students. We’re following the science, we’re teaching an accurate and honest rendering of health and sexual education, per the approved state standards and approved curriculum at the local level.”

Not only have studies shown that comprehensive sexual education reduces teenage pregnancy, but it also helps young people protect themselves from sexually transmitted infections, sexual abuse, and relationship violence.

“We know from decades of research that inclusive sexual education (which covers consent and LGBTQIA2+ identities) increases positive mental health outcomes for all students in a school, not just LGBTQIA2+ students,” said Liss Smith, communications manager for Inside Out Youth Services in Colorado Springs, in an email. “The earlier we can teach consent and healthy relationship building, the more likely we are as a society to prevent sexual violence both in childhood/adolescence and adulthood. Comp sex ed is proven to reduce bullying, sexual violence, suicidal thoughts, and more. In contrast to abstinence-only education, the benefits are incredibly clear. For LGBTQIA2+ students, in particular, comprehensive sex ed is vital. Our community is at higher risk for STIs, including HIV/AIDS, and it’s unrealistic to assume that all queer students will be able to find accurate, comprehensive information about STI prevention on their own – if they even know they need to. There are so many myths about sex in the LGBTQIA2+ community, and debunking those myths for students (especially before they even become sexually active) can be life-saving.”

According to data provided by Inside Out:

Smith also notes that the recent right-wing trope of associating “grooming” with LGBTQ content or individuals is not just harmful to adults but students as well. “To call the very presence of LGBTQIA2+ adults in schools “grooming” is honestly an insult,” they said. “LGBTQIA2+ people are human beings with full lives, who have as many careers and interests as straight and cisgender adults. To assume that our very existence is inappropriate reduces us to sex objects, and does so much damage to young people hearing that message. They need to know they can have a full future, that they can follow their passions. If we leave LGBTQIA2+ identities out of history, literature or other curriculum — or if we vilify LGBTQIA2+ faculty and staff — we are erasing and dehumanizing an entire community. A community to which many of our youth belong.”

Flora cites a statewide drop in standardized test scores as evidence that unions are successful in their efforts to destroy public education, but Baca-Oehlert notes that such correlations are unfair and inaccurate.

“They absolutely are not fair,” Baca-Oehlert says. “When we’re only using one indicator to judge our student performance, our educator’s performance, our school, and district performance, we’re missing out. As educators, we use a whole body of evidence to determine how our students are doing, what they’re learning, what they still need to learn, so to use a single indicator and let that be the frame, or set the narrative for everything that’s happening in our schools is certainly not fair.”

The film also claims that unions collect dues to spend on political activity, such as donating to Democratic candidates and groups like Planned Parenthood.

“We have not contributed to Planned Parenthood,” says Baca-Oehlert. “The teachers union is made of educators, who voluntarily choose to belong to the union that is speaking up for students and public education. Our membership is a mixture of Democrats, Republicans, Independents, and we have a process where we recommend candidates. We use a bipartisan group of members to engage in that recommendation or endorsement process and then we recommend candidates based on their values for public education. It’s not based on political party, it’s based on what their values are, rated to their support for public education. In fact, in this last cycle, we recommended a Republican. [Rep.] Cleave Simpson [R-Alamosa] was one of our candidates through our endorsement process.”

Flora’s solution for local and national education woes, which has been echoed by this year’s crop of political candidates, including GOP gubernatorial candidate Heidi Ganahl, is school choice — more charter schools and a funding system that provides funds to the student, not the school district, like voucher systems.