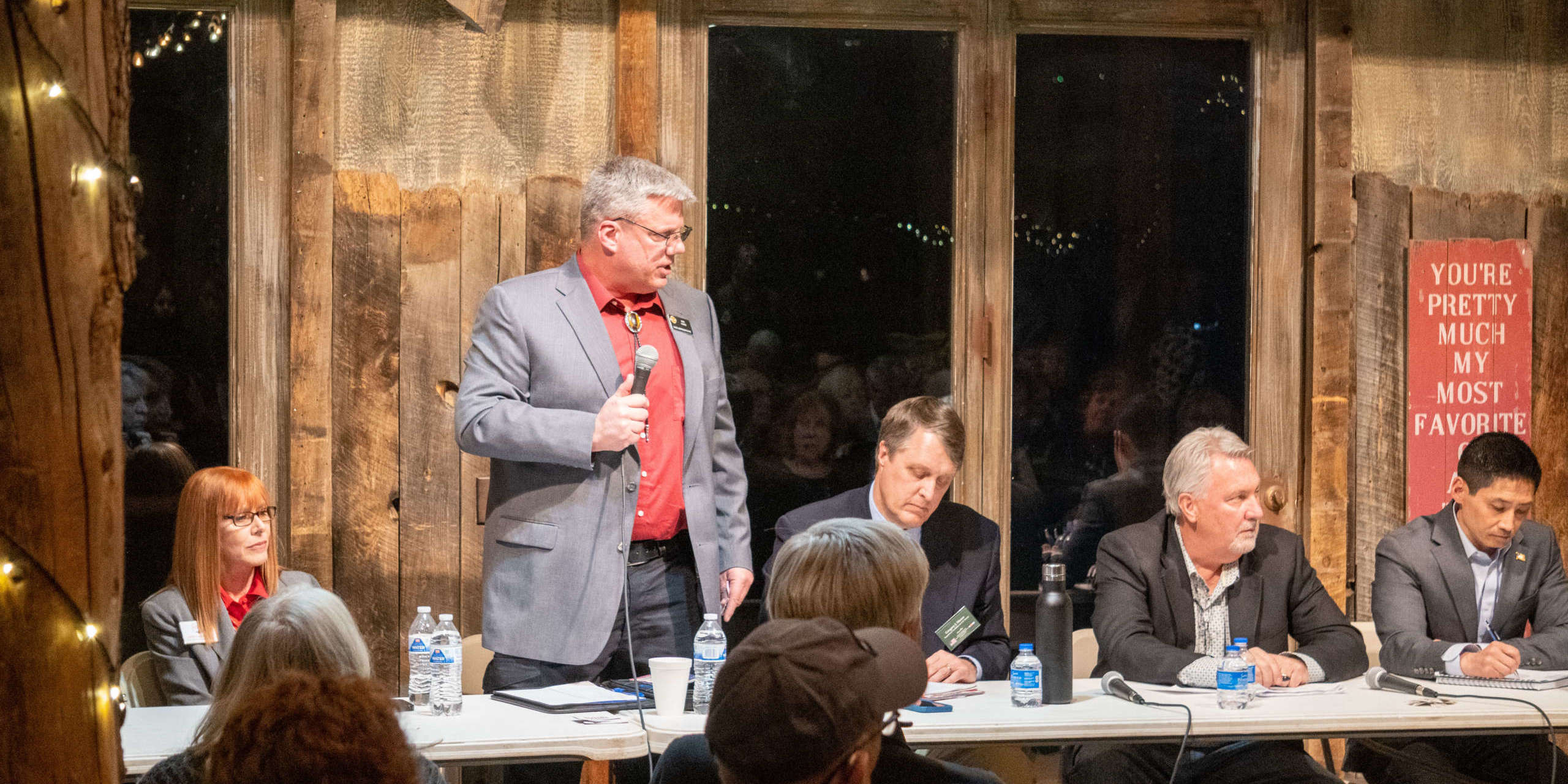 Republican Senate candidate and state Rep. Ron Hanks (R-Cañon City) is refusing to denounce violence as a last resort if election conspiracists don’t get their way, describing it as one of the “four boxes of liberty.”

“Anything is worth a try because it’s what keeps us from violence,” Hanks told the Colorado Times Recorder in December. “We are going to hit a point here where there are no more things to try, and that’s where things get dangerous to me.”

After a debate Tuesday among Republican U.S. Senate candidates vying to challenge U.S. Sen. Michael Bennet (D-CO), the Colorado Times Recorder read Hanks’ quote back to him and asked him if it was a threat of violence.

“That’s been asked and answered multiple times but you’ve heard of the four boxes of liberty?” Hanks said in response. “It’s the soapbox, the ballot box, the jury box, and the ammo box. That’s a good reference for you to look up. It’s from the founding of our country. That’s my point.”

The four boxes of liberty is an idea with roots in the civil rights and suffragettes movements describing the four escalating ways (in that order) citizens can fight for personal liberties. Since the 1970s, the idea has been co-opted by anti-government extremists to justify violence when other methods have failed.

Hanks is currently pursuing his cause in the soapbox, ballot box, jury box (he helped launch a lawsuit against Colorado Secretary of State Jena Griswold over the 2020 election results and has introduced several election fraud bills in the state legislature) – leaving the ammo box untried.

Last year, Hanks attended the Jan. 6 riot at the U.S. Capitol and crossed police barriers. Also, last week Hanks was endorsed in the U.S. Senate race by Joe Oltmann, a fellow election fraud conspiracy theorist who has said that Gov. Jared Polis (D-CO) and other politicians should be hanged for labeling his conspiracy theories as the “Big Lie.”

Hanks refused to say if he would condemn a violent response to debunked, baseless election fraud conspiracies, which Hanks has put at the center of his campaign for U.S. Senate.

Below is a transcript of the exchange.

CTR: “If all your work with election fraud fails, would you condemn a violent response?”
RH: “Well we’re working to make things happen. In fact, there already have been revelations of election fraud, proof of election fraud. So I think your premise is highly flawed at this point.”
CTR: “Would you come out right now and say that there should be no violence in response to any election fraud concerns?”
RH: “Who am I saying this to? What are you even proposing? Who am I supposed to project this to?”
CTR: “Just to anyone who might want to do something violent when they believe there’s been election fraud.”
RH: “No I think my statements stand as they are. My statements are carefully crafted and stated and I stand by every one of them. I’m not really interested in taking your statement and making it my statement.”
CTR: “What do you mean by that?”
RH: “What do you mean ‘what do I mean?’ You just asked me if I would stand up and say no to violence.”
CTR: “And you’re not interested in doing that?”
RH: “My statements come from me. That statement came from you. So I’m not interested in your words. I’m interested in my words.”

Or click here to listen to the audio yourself.