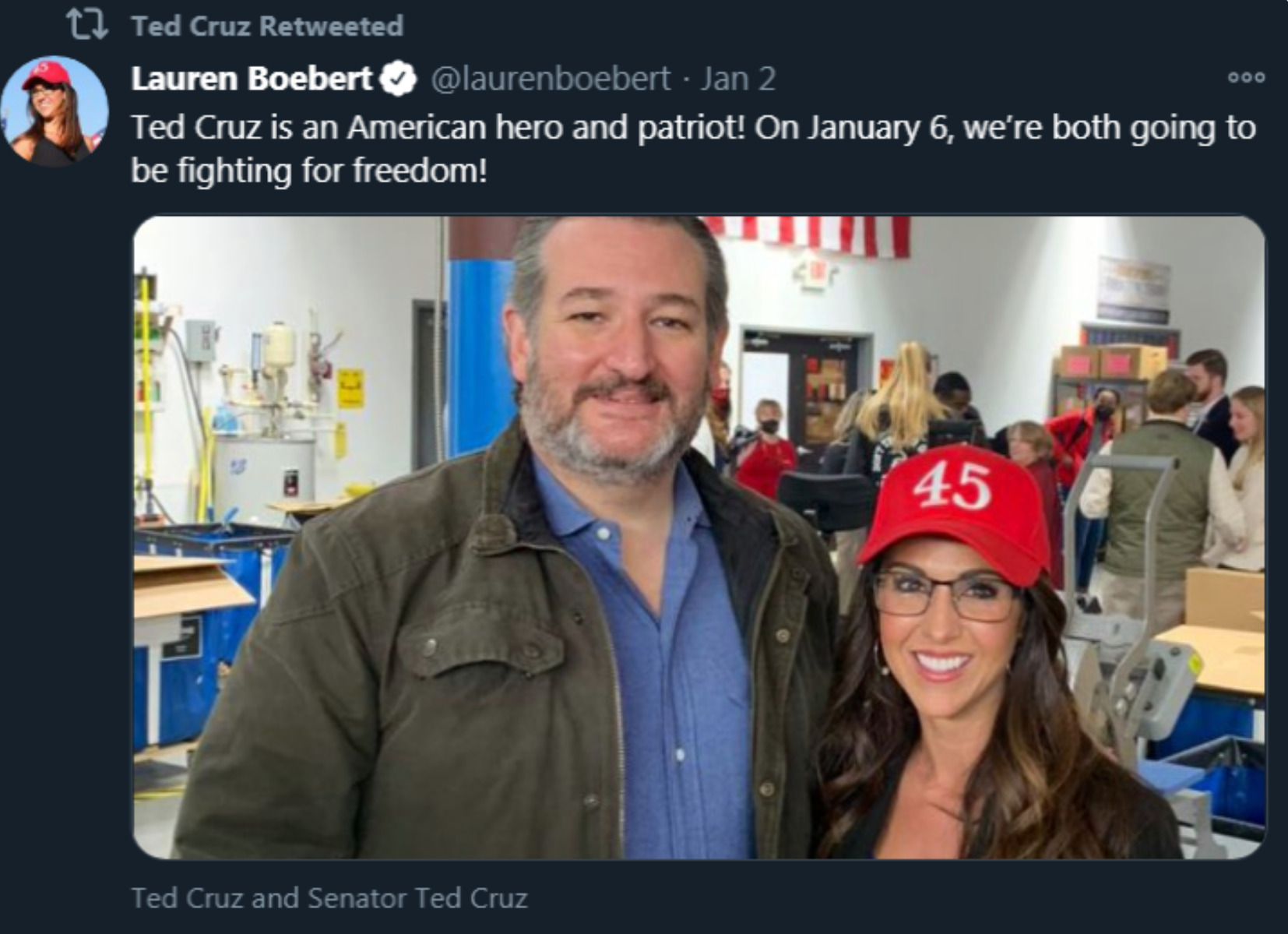 Following Corporon’s invitation for listeners to view Boebert’s Twitter account and hyping her coded vulgar insult to President Biden, a pinned “Let’s Go, Brandon” tweet, he then criticized that same platform for permanently suspending the accounts of Rep. Marjorie Taylor Greene (R-GA) and American virologist and pioneer developer of mRNA vaccines Dr. Robert Malone after both violated Twitter’s misinformation policies in posts about COVID-19 and the efficacy of the COVID vaccine.

Corporon said that Truth Social will be functioning within two months, in time to play — along with GETTR — as “equalizers” in the 2022 midterm campaigns, but that claim and timeline have been disputed.

Boebert responded by questioning the legitimacy and objectivity of fact-checking efforts by social media platforms.

In a reference to Operation Mockingbird from the Kennedy administration, Boebert promoted a conspiracy theory that agents of government are currently bribing and coercing journalists, media outlets, and social media companies in order to undermine conservative messaging efforts and suppress conservative viewpoints.

The following transcription is from a segment of Boebert’s interview with Corporon on Saturday’s broadcast on KNUS, 710 am.

CORPORON: The left wing media machine, especially the social media giants, are so terrified of messages like yours, I’m surprised you haven’t been silenced in, for instance, on Twitter. Your colleague Marjorie Taylor Greene, who I was texting with yesterday, is now off. Dr. Robert Malone, who, you know, the really — sort of the founder of the mRNA technology behind these so-called vaccines, after 40, 50 million people listened to his interview with Joe Rogan is now banned on Twitter. They’re terrified. And the great thing is, we now have, you know, GETTR adding — what — 250,000, 500,000 people a day. The Trump social media network, which maybe you know a little something about — you can tell us if you do — is supposed to be up in late February or mid-March, and [they will be] the great equalizers as we approach midterms and another important presidential [election].

BOEBERT: Right, yes, well, I am looking forward to that social media platform. We’ve seen Congressman Devin Nunes resign from Congress because he’s going to work with President Trump on these issues. I know some of the other staff that are working on it, and I’m really looking forward to it because I’m tired of the propaganda. I’m tired of ‘Operation Mockingbird’ that we see on social media, on our local news stations, on the mainstream media stations, and we need to get the truth out. We know — as I said on Newsmax this morning — we know that the so-called fact checkers are third party opinion-based, and the red flags for so-called misinformation only go one way. We have a Supreme Court justice that were just completely wrong yesterday in the hearings for the OSHA claims, here, with Biden’s unconstitutional vaccine mandates, saying 99% of hospitalizations are from the unvaccinated, saying over 100,000 children are hospitalized. And we could go on and on. And so the misinformation only goes one way. They want to silence us. This is pure propaganda, and we have to continue to be loud to push against that.