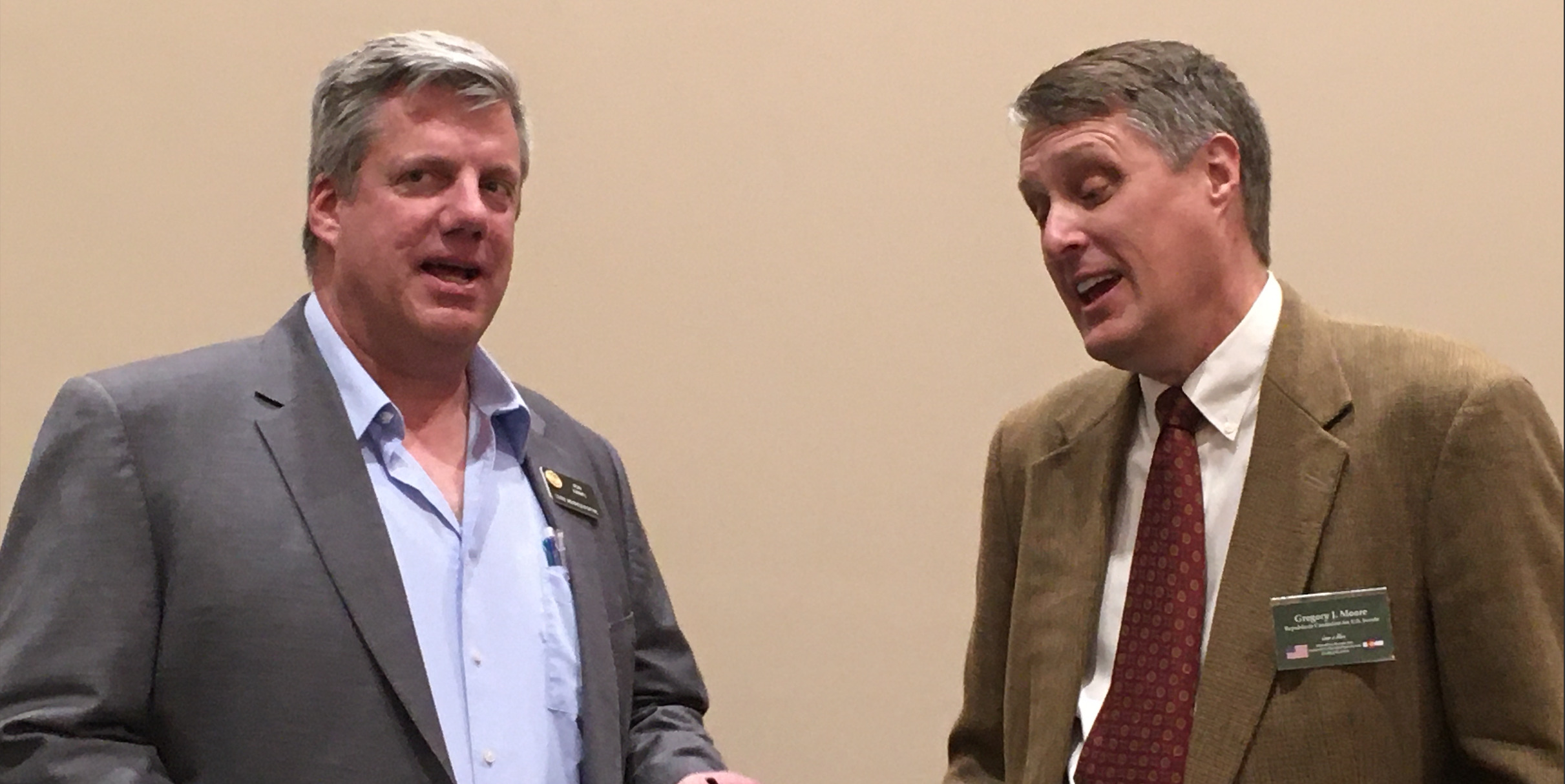 The final question posed to each of the six candidates who participated Monday evening in a Senatorial and Gubernatorial Candidate Debate in Grand Junction was perhaps the most revealing: Each candidate was asked for a one-word answer of who they believed won the 2020 U.S. Presidential election.

All but one answered “Trump.” Greg Moore, a former Colorado Christian University professor from Evergreen, reluctantly said, “although I don’t like it – Biden.” Faint boos could be heard coming from the audience.

The evening’s straw poll results left no doubt about the audience’s preferences. The most extreme candidate for each office, state Rep. Ron Hanks for Senate and Danielle Neuschwanger for Governor, each won their respective contests by wide margins.

The conservative activist group, Stand For The Constitution (SFTC), organized the January 24 debate, held at the Grand Junction Convention Center.

The event started off with a prayer led by pastor Wendi Wood, the wife of Gerald Wood, who, along with embattled Mesa County Clerk Tina Peters, is under investigation for an alleged election security breach at the county clerk and recorder’s office.

After the invocation, debate moderator Janelle Routhier led the audience in a recitation of the pledge of allegiance, followed by a singing of the National Anthem. The audience of roughly 300 people were mostly mask-less.

The senatorial debate started off with Deborah Flora, from Douglas County; State Rep. Ron Hanks, from Cañon City, and Greg Moore, of Evergreen. Senatorial candidates Juli Henry and Peter Yu were unable to attend due to illness, said organizers.

“I have stood up and exposed radical leftists,” said Flora, in her opening statement. “As the daughter of a veteran, I know how important our elections are. If we want to stop radical Michael Bennet we have to do something different.”

Hanks began by noting a lot of familiar faces in the crowd, who, like him, support Clerk Peters. In addition to local, state and federal investigations into alleged wrongdoing, separate ethics complaints have been filed against Peters, as well as a new lawsuit alleging the illegal transfer of property, filed on behalf of Peters’ ex-husband Thomas Peters.

“We have tyranny in our midst at the state and federal level,” said Hanks, who attended the January 6 insurrection at the U.S. Capitol. “I’ve been labeled a racist, insurrectionist and a seditionist.”

Moore introduced himself as “an evangelical Christian,” who “loves Jesus.” Moore told the crowd his career has been in education, and that this is his first foray into politics.

When asked about what would be their legislative goals if elected, Moore mentioned that the U.S. Department of Education is “bloated” and that the U.S. should be tougher on Russia and use “U.S. air power” if Ukraine is invaded.

Hanks declared repeatedly that he would cut the U.S. government by 30% – which drew applause from the conservative audience. He also claimed the military no longer has the capacity or level of readiness as it had when he left the service in 2017.

Flora said she would focus on balancing the budget and that she would “definitely pull back on the department of education.”

Each candidate agreed that there should be term limits on elected officials. Hanks added that Supreme Court judges should be term-limited, as well.

The three candidates also agreed there should be a ban on trading stocks while serving in Congress.

Flora said she is suspicious of congressmen and women becoming millionaires on a $175,000 salary.

“Outside trading is wrong,” she said. “It has to stop.”

Moore added, “I do not believe the rich are bad. If you’re wealthy, that’s a blessing from the Lord.” He then went on to comment on Gov. Jared Polis’ use of his own money to fund his campaigns.

“As a professor, an academic, it’s not easy to run a campaign,” he said. “Polis has millions of his own money. It’s not fair – what about us? We also need limits on candidates funding their own campaigns.”

Hanks again drew applause when he said he’d “abolish” the department of education. That came after Moore mentioned that concerned parents are being labeled “domestic terrorists” (contentious school board meetings over COVID-19 policies and critical race theory (CRT) have led to threats of violence toward school board members nationwide).

While his own children are homeschooled, Moore mentioned more than once during the debate that “we have to fight against critical race theory” (CRT) – an academic concept stating “that race is a social construct, and that racism is not merely the product of individual bias or prejudice, but also something embedded in legal systems and policies,” according to edweek.org.

Flora congratulated Mesa County on its recent election of a conservative bloc of school board candidates, saying “here’s where we can win.”

Focusing on school boards is a “winning approach for Republicans,” said Moore, adding that battles need to take place with school boards and state and federal officials to give back choice to parents.

“I’d get rid of union-backed school board candidates,” Flora told the audience. “We can, and will do it.”

In an apparent distortion of CRT, Flora said children are being told they are “inherently evil for a lack of melatonin in their skin.”

In-between the two debates, moderator Routhier asked the audience for a “boo” of Colorado Secretary of State Jena Griswold before inviting David Winney to the stage where he announced he would be running against Griswold in the next election. Winney is a U.S. Marine veteran and an “America First Republican,” according to his web site.

The gubernatorial debate began with candidates Jason Lopez, a Colorado native who served in the U.S. Military with the Special Forces Green Berets; Greg Lopez (no relation to Jason), a U.S. Air Force veteran and former Colorado director of the U.S. Small Business Administration; and Danielle Neuschwanger, a self-described “firecracker” and cattle rancher.

“Our liberty and Constitution are at stake,” which I’ve been sworn to defend, said Jason Lopez.

“I was upset when the 2020 election was stolen from us,” Neuschwanger said. “The Mockingbird media called us insurrectionists.”

Although Jason Lopez said he would support a forensic audit of the 2020 election, he also said “I don’t know if the election was truly stolen” – which appears contrary to what he later said when candidates were asked who they thought won the Presidential election.

Both Jason Lopez and Greg Lopez alluded to alleged election irregularities in Mesa County, including the “erasure of files.” Former Mesa County Clerk Sheila Reiner, who was appointed to help supervise county elections after Peters was banned from the elections office, has noted that county clerks are required to do a routine backup and copy of election files and that the county elections division did so appropriately, making audits possible.

On the topic of immigration, Neuschwanger said she would mobilize the National Guard to finish building Trump’s wall.

She acknowledged that in order to win she’ll need Independent and even some Democrat votes, but that she has an edge with the majority of voters who are millennials, like herself.

“We spend six hours a day on our devices,” she said. “When I post on social media I’m reaching voters – including Democrats. Old strategies won’t win.”