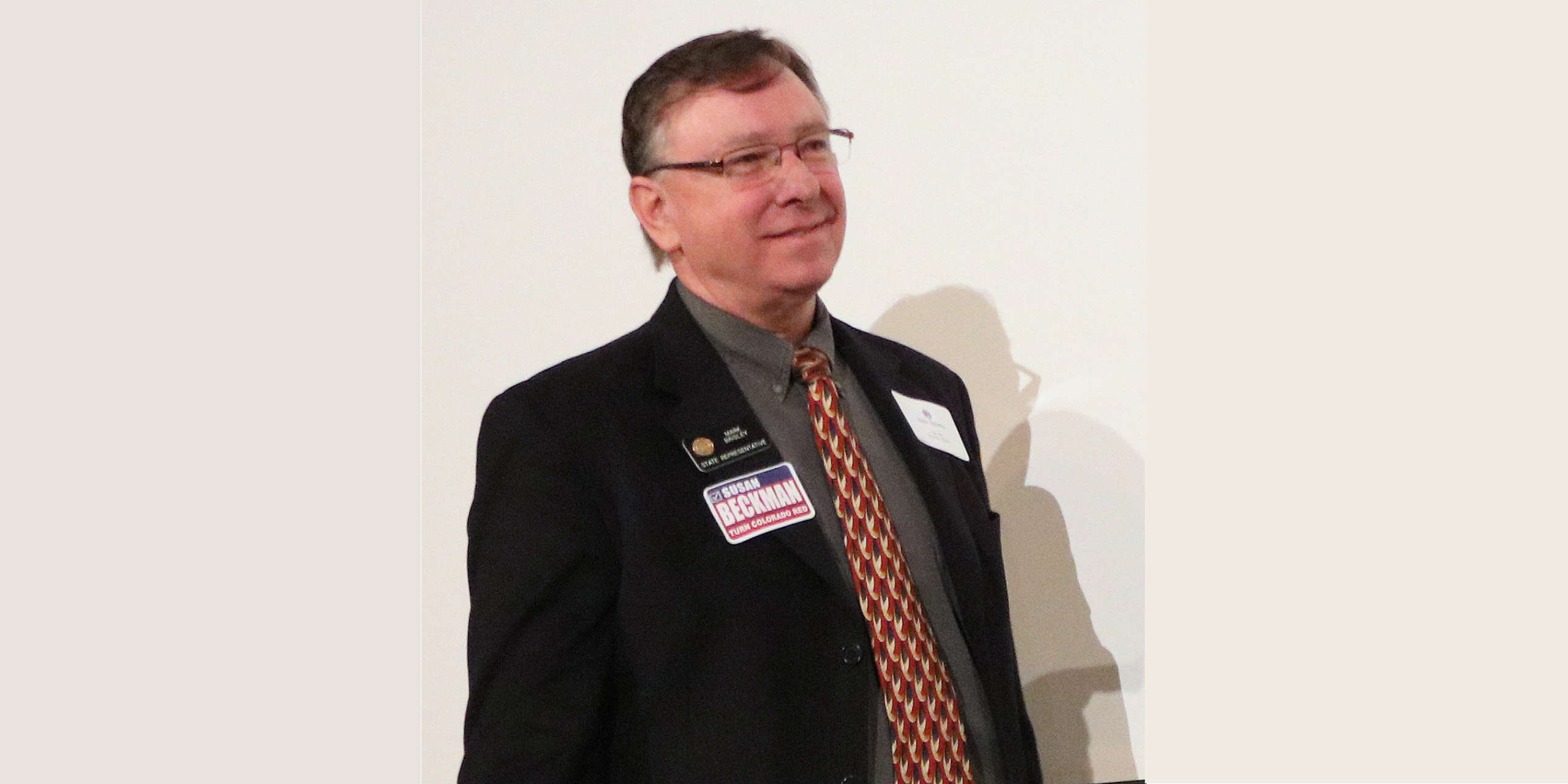 Joining three of his Republican colleagues, Rep. Mark Baisley of Roxborough Park admitted in a radio interview last week that he made a mistake — in part due to a failed plan by “disjointed” state House Republicans — in supporting GOP amendments validating baseless election conspiracies.

The votes in favor of the measures could diminish Republican prospects in the midterm elections, he said, explaining his second thoughts on voting for them.

Although the amendments to a Democratic voting-rights resolution failed, they gained lots of media attention, since they perpetuated debunked and misleading claims of election fraud.

The controversial amendments that Baisley now regrets supporting, as first reported by 9News’ Kyle Clark, were introduced by Rep. Dave Williams (R-Colorado Springs) and were practically doomed to fail as soon as they were introduced. A sizeable Democratic majority in the state House ensured the amendment would be blocked, even if all 24 House Republicans voted for them.

Williams’ amendments proposed that the Colorado Assembly offer thanks to state Rep. Ron Hanks (R-Canon City) and “millions” of other participants in the Washington D.C. protest that culminated in a deadly insurrection at the nation’s Capitol on Jan. 6, 2021, in an attempt to overturn the 2020 presidential election results. Hanks has admitted to crossing toppled police barriers as made his way to the Capitol grounds.

Provisions in the amendments also proposed that the Assembly acknowledge “significant voter fraud” during the 2020 elections, so as to “call into question the legitimacy of Joseph R. Biden to be President,” although there is no evidence back that claim.

They also proposed that Colorado House representatives encourage forensic audits of election results in all states, end the use of Dominion Voting machines in Colorado, support Mesa County Clerk and Recorder Tina Peters (who is currently under investigation for security breaches and has been relieved of her election oversight duties), and urge the decertification of 2020 election results from states where sufficient election fraud is uncovered so as to change the election outcome, “while standing with the 45th President of the United States, Donald J. Trump, in his righteous efforts to fight for election integrity.”

In all, 16 of 24 House Republicans voted in favor of the failed amendment.

In his interview with guest host Jimmy Sengenberger on KNUS‘ Peter Boyles Show on Thursday, Baisley acknowledged the dubious validity of the amendments’ claims.

And he agreed with Sengenberger’s warning of electoral liability that comes with corralling GOP legislators into indefensible positions that undermine voters’ confidence in the integrity of U.S. elections.

While Baisley backpedaled on his vote for the amendments, other Republicans have taken the opposite tack. Williams, former House Minority Leader Patrick Neville (R-Castle Rock), and the conservative advocacy group Colorado Hispanic Republicans have criticized the eight GOP lawmakers who voted against the combined amendment and the four who have backed away from their earlier support, calling them “spineless” and “RINOS.”

By way of explaining his bad vote, Baisley told Sengenberger that Democrats were partially to blame, claiming their resolution was merely a performative effort to build support and electoral viability for their candidates and burden Republicans with recorded votes that are unpopular with the broader voting population.

He added that Hanks was unfairly portrayed as one of the rioters in Democratic floor speeches in support of the resolution.

“The Democrats outplayed us for sure on this,” Baisley said. “And that was [their] intent going in, so that they were going to put us in a position, goading us with racist statements and so on, and try[ing] to tee all that up and then say, ‘I dare you to vote against this,’ and, ‘We’ll have you on record,’ and so on.”

However, Baisley also puts some of the blame on his own caucus, apparently to include himself, and their failure to stick to their strategic plan.

In a caucus meeting before the introduction of the resolution and amendments, Republicans had agreed that Minority Leader Hugh McKean (R-Loveland) would address their objections to the resolution in a speech from the House floor. But Republican members failed to stick to their plan, and the protesting amendments were written and filed for consideration

“We had a pretty good agreement going on that we were really going to do nothing,” explained Baisley, “that we were going to just simply allow them to to make their statement. … And the going-in plan was that our leader, Minority Leader Hugh McKean, he was going to give a speech — which he did give, it was this speech that he gave in the end. And it was a fine speech; it covered all the bases, it gave the proper perspective. And we were going to just sit tight and be quiet and not take that bait because as you said, there was bait. … Well, what happens in a rather disjointed caucus like ours [is], well, not everybody shows up to that meeting. And then, as they say in war, the first shot gets fired and the battle plan gets thrown out the door. So, it was very unfortunate that the very well-thought-through plan did not get executed.”

In accordance with applicable House rules, the amendments had to be combined into one vote, disallowing Republicans the opportunity to support some components of the amendments while voting against others.

But when it came time to vote, Baisley said he was caught in the difficult position of choosing to support things he really didn’t agree with or voting against the whole amendment which would risk angering Republican constituents and members of his caucus.

In deciding to vote for Williams amendments, Baisley now acknowledges he made the wrong choice.

Sengenberger pushed back on Baisley’s characterization of his voting dilemma, noting that when voting in support of an amendment with verifiably false or unpopular positions, Republicans are handing the Democrats a political advantage with voters and public perception.

“Well, it was taking the bait — absolutely true,” said Baisley, “and it did come from the lack of coordination that we unfortunately did not have in the first place. … But it was more, ‘Do I want to go on record as having cast a vote that appears to be in support of the awful underlying resolution in the first place?’ And I did not. So, that was really the prime motivation for my vote. Even though I was not happy with the amendments being proposed, I did not want to vote against the rebellion against that resolution in the first place. … We all — including myself — got a flood of emails from our constituents asking us to stand up against it hard. And yeah, I wish we had not had those amendments to that resolution because they did put us all into an awkward position, and it did give the other side what they were hoping for, which was some material to throw at us this election season. In fact, and the way it was all wrapped up by the Speaker of the House [Alec Garnett (D-Denver)], he said as much. And in his loudest voice ever … he said, ‘Hey, just look at the votes. Look at the votes of the amendments, and remember that this November.’ And so, it was exactly what we had planned against. And then we’re not together as a caucus to prevent.

The Democrat-sponsored House resolution, H.R. 22-1004, passed the Colorado House on a party-line vote last Wednesday after the Republican amendments failed.

As passed, it calls for the House to reassert the validity of the 2020 presidential election results and to offer Colorado’s electoral system as a model for other states to adopt.

The resolution also urges Congress to adopt comprehensive voting rights legislation — such as the Freedom to Vote Act and the John Lewis Voting Rights Advancement Act that were passed out of the U.S. House last year — in response to recent increases among some states to tighten voting restrictions that can suppress voter participation, especially among certain demographic groups.

Republican lawmakers in Colorado, however, generally object to federalizing election laws, preferring instead to allow each state to determine and implement their own unique electoral system.