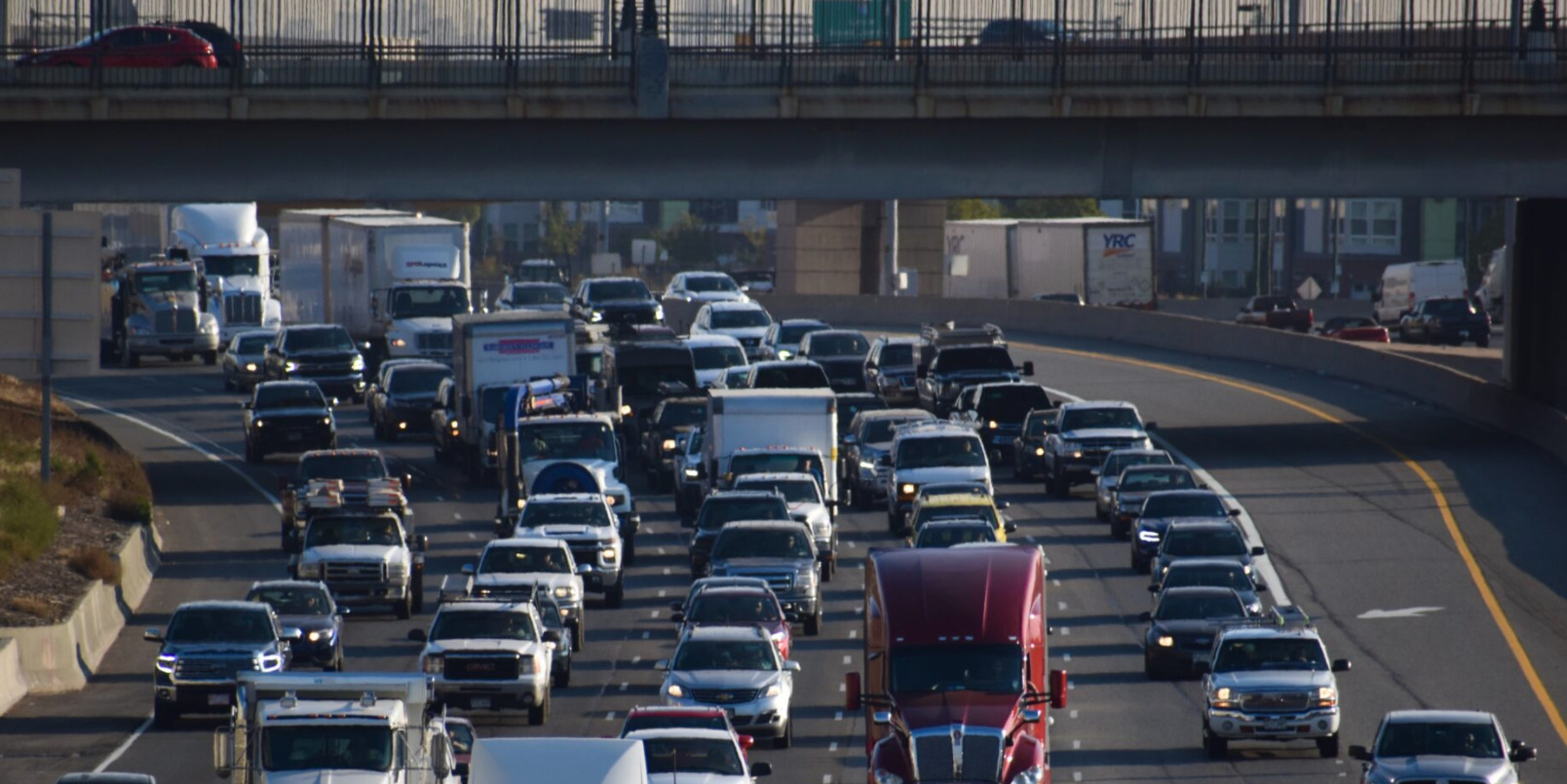 Every hour of every day, Colorado is adding huge amounts of carbon dioxide and other planet-warming greenhouse gases to the Earth’s atmosphere — 126 million tons of them in 2019 alone, according to state estimates.

That’s a modest improvement since Colorado’s emissions peaked at 150 million tons around 2010, but it’s nowhere near enough. The science is clear: Catastrophic global climate impacts are already underway, and will only keep getting worse until the world reduces its carbon emissions to zero.

“Reducing greenhouse gas pollution across our economy to meet the state’s science-based goals will be no small task,” state officials warned in a 2021 report. “We have much work to do to protect the Colorado way of life for generations to come.”

The state’s 125 million tons of annual emissions are the product of countless individual choices made by Coloradans every day — but they’re also the product of the policies and systems that impact those choices. A typical Colorado resident may be able to choose how to get to work in the morning or what kind of appliances to buy, but they don’t decide how fast and reliable their local public transit system is, or what kind of code requirements their home is subject to.

The stakes of these decisions, in Colorado and beyond, couldn’t be higher. Already, the greenhouse gases added to the atmosphere by human activity since the late 19th century have warmed the planet by an average of 1.1 degrees Celsius, causing severe impacts across the globe. In parts of Colorado, including much of the Western Slope, warming has outpaced the global average, deepening a 20-year “megadrought” impacting farmers and ranchers and leading to unprecedented wildfires.

The longer the world delays in reaching net-zero emissions, the worse these impacts will get. Many parts of the world, especially in Asia and Africa, could become virtually uninhabitable due to extreme heat. Coastal regions could be inundated by rising sea levels. Droughts and other natural disasters could cause agricultural yields to collapse, destabilizing governments and displacing hundreds of millions of climate refugees.

In August, the world’s top climate scientists issued another dire warning in the latest assessment from the United Nations’ Intergovernmental Panel on Climate Change, which again found that “recent changes in the climate are widespread, rapid and intensifying.” U.N. Secretary-General António Guterres said that the IPCC’s report was “a code red for humanity.”

World leaders have convened in Glasgow, Scotland, this month for a critical U.N. climate summit known as COP26. Two Colorado state lawmakers, Rep. Dominique Jackson of Aurora and Sen. Faith Winter of Thornton, are in attendance, and U.S. Rep. Joe Neguse, a Democrat from Boulder, also arrived at the summit on Monday, his office said in a press release.

“Our state boasts world class universities and laboratories in earth science and climate change, and ambitious local and state government officials who are leading the way with policy action,” Neguse said in a statement. “That’s why I’m excited to bring the voice of Coloradans to COP26, and participate in critically important international discussions about needed action to build a brighter future.”

How are Colorado politicians and policymakers responding to climate change?

In general, Democrats say climate change is an “existential threat” that must be urgently addressed, while Republicans deny, downplay and spread misinformation about it.

Since taking full control of state government in 2018, Gov. Jared Polis and Democratic lawmakers have launched a wide range of efforts to reduce Colorado’s greenhouse gas emissions. The centerpiece of their climate agenda is House Bill 19-1261, a 2019 law that commits the state to achieving a 50% reduction in overall emissions by 2030 and a 90% cut by 2050.

Polis and some of his fellow Democrats, however, have regularly clashed over the best way to implement HB-1261 and achieve its goals. Many environmental groups believe the governor’s preferred approach, laid out in a non-binding policy “roadmap,” relies too heavily on private-sector action and not enough on regulatory intervention. In 2021, Polis and Democratic lawmakers reached a compromise that strengthened mandates on some industries, but not others.

Nearly all of these efforts have been bitterly opposed by Colorado Republicans, many of whom continue to deny the overwhelming, decades-old scientific consensus that climate change is real and caused by human activity. As recently as June 2021, the state’s highest-ranking Republican, Senate Minority Leader Chris Holbert, said of “so-called climate change”: “I do not believe that it is man-made.”

What are Colorado’s largest sources of emissions?

In short, fossil fuels. The production and combustion of coal, oil and natural gas accounts for roughly 90% of greenhouse gas emissions in Colorado and globally.

They’re followed closely by the “upstream” emissions produced by the extraction of oil and gas in Colorado, which accounts for more than 16% of the state’s total, as well as the use of natural gas as a heating fuel by industrial facilities (12%) and homes and businesses (11%).

Mostly, to make sure utilities and power providers keep their promises as a market-driven transition to clean energy unfolds over the next 20 years.

When it comes to climate policy, few things are more important than a clean electric grid. As more battery-powered vehicles and electric home appliances are deployed to cut emissions in other sectors, the grid will have to add generating capacity even as it works to reduce emissions. Experts generally agree that existing and emerging technologies enable the electric sector to cost-effectively cut 80% to 90% of its emissions, with the last portion dependent on the development of new or more efficient versions of technologies like long-term battery storage.

In Colorado and elsewhere, efforts to decarbonize the electric sector have gotten a boost from the increasingly low cost of wind and solar energy. Through a combination of voluntary pledges and regulatory pressure, state officials have secured commitments from utilities and power providers to shutter 10 of Colorado’s 11 remaining coal plants by 2030, which will help cut statewide electricity emissions by more than 80%.

Citing concerns about feasibility and cost, however, Polis’ administration has rejected calls from environmental groups to accelerate this process — even overturning a decision that would’ve sped up several coal plant retirements by just one year.

In the short term, not much — while counting heavily on a shift to electric cars and trucks in the long run.

Experts and policymakers say transportation is one of the hardest sectors to decarbonize; its emissions are the product of millions of individuals and the actions they take every day, not just a few large utility companies. Colorado’s transportation sector emits about 27 million tons of CO2 and other greenhouse gases annually, roughly two-thirds of which comes from its 5.4 million passenger vehicles.

Eventually, Colorado officials want all of those vehicles to be electric — a shift that, by their own admission, could take 30 years or more to complete. In 2019, state regulators adopted a zero-emissions vehicle mandate that will require automakers to sell an increasing number of EVs in the coming years, and state agencies and local governments are working to build out an extensive network of EV charging infrastructure to support the transition.

In general, however, the Polis administration and state lawmakers have shied away from strategies centered on significantly reducing car travel. In 2021, the administration backed off a plan to require large employers to encourage alternative modes of commuting, while the Democratic-controlled Legislature passed a $5.3 billion transportation funding bill that allocated less than 10% of its total to public transit and other multimodal options. The Colorado Department of Transportation is moving forward with a proposal to incorporate greenhouse gas standards into long-range planning, but it has resisted calls from environmental groups to make cutting down on car travel an explicit objective of the program.

What about carbon capture?

Colorado is studying it, but not counting on it making a big impact.

A wide range of existing and theoretical technologies fall under the umbrella of carbon capture, utilization and storage, or CCUS. Despite multiple decades and many billions of dollars spent on research and development, global CCUS capacity was about 40 million tons of CO2 last year — enough to offset about 0.08% of the world’s annual emissions.

No commercial-scale CCUS project is currently operating in Colorado, though several have been proposed. A state task force convened to study the issue will finalize a set of recommendations for the governor in December. Official projections from state analysts predict that the state’s capacity for “negative emissions technologies” won’t exceed 1 million tons until 2035, and will reach 3.1 million tons by 2050 — accounting for just over 2% of the total emissions cuts the state is targeting by that date.

What else is Colorado doing to reduce emissions?

Cracking down on methane leaks from oil and gas infrastructure, encouraging energy efficiency and electrification in buildings, and a multitude of minor actions constituting what state officials tout as a “whole-of-government” approach.

In the oil and gas sector, limiting “fugitive emissions” of methane, an especially powerful greenhouse gas, continues to be a priority for the state. Both the Colorado Oil and Gas Conservation Commission and the Air Quality Control Commission have enacted regulations aimed at reducing methane leaks, and the AQCC is set to pass another set of rules in late 2021.

The General Assembly has passed laws to reduce emissions from building fuel use, including through energy efficiency “benchmarking” for large buildings and “beneficial electrification” of gas-powered heating and cooking appliances — though local governments, which are responsible for setting building codes, will likely have to take the lead in reducing natural gas combustion. The city of Denver has set targets for all-electric construction in new homes by 2024 and new commercial buildings by 2027, but few other cities have gone that far.

For the most part, anything that would substantially increase costs or require significant lifestyle changes for Coloradans now, to benefit future generations later.

Many of Colorado’s most powerful state and local leaders accept the science of climate change and are working to address it. Official projections and independent analyses generally agree that the state’s emissions are trending downward, and its statutory targets, while not a sure thing, are within reach.

But state policymakers have also demonstrated that there are hard limits to the kinds of decarbonization policies they’re willing to pursue. Polis has steadfastly opposed cap-and-trade systems that could put a price on carbon. Lawmakers and regulators have sought to curb methane pollution in the oil and gas sector, but supply-side measures aimed at curbing emissions by limiting production are off the table.

In 2018, IPCC scientists warned that limiting global warming to an average of 1.5 degrees Celsius — thus averting many of its most catastrophic impacts — would require “rapid, far-reaching and unprecedented changes in all aspects of society.” They compared the scale and speed of the necessary effort to the American economy’s mobilization in World War II.

Nothing even close to such an effort is currently taking place in Colorado or in any other U.S. state. Only a tiny fraction of its state budget and economic output are currently being mobilized in support of decarbonization.

That reality is in large part why the world’s top climate researchers, in a survey conducted by scientific journal Nature ahead of COP26, expressed doubt that the targets outlined in the Paris Agreement will be reached. More than 60% of respondents told Nature they believed that at least 3 degrees Celsius in global temperature rise — far above the Paris goals of 1.5 to 2 degrees — is likely by the end of the 21st century.

This article was originally published in Colorado Newsline.