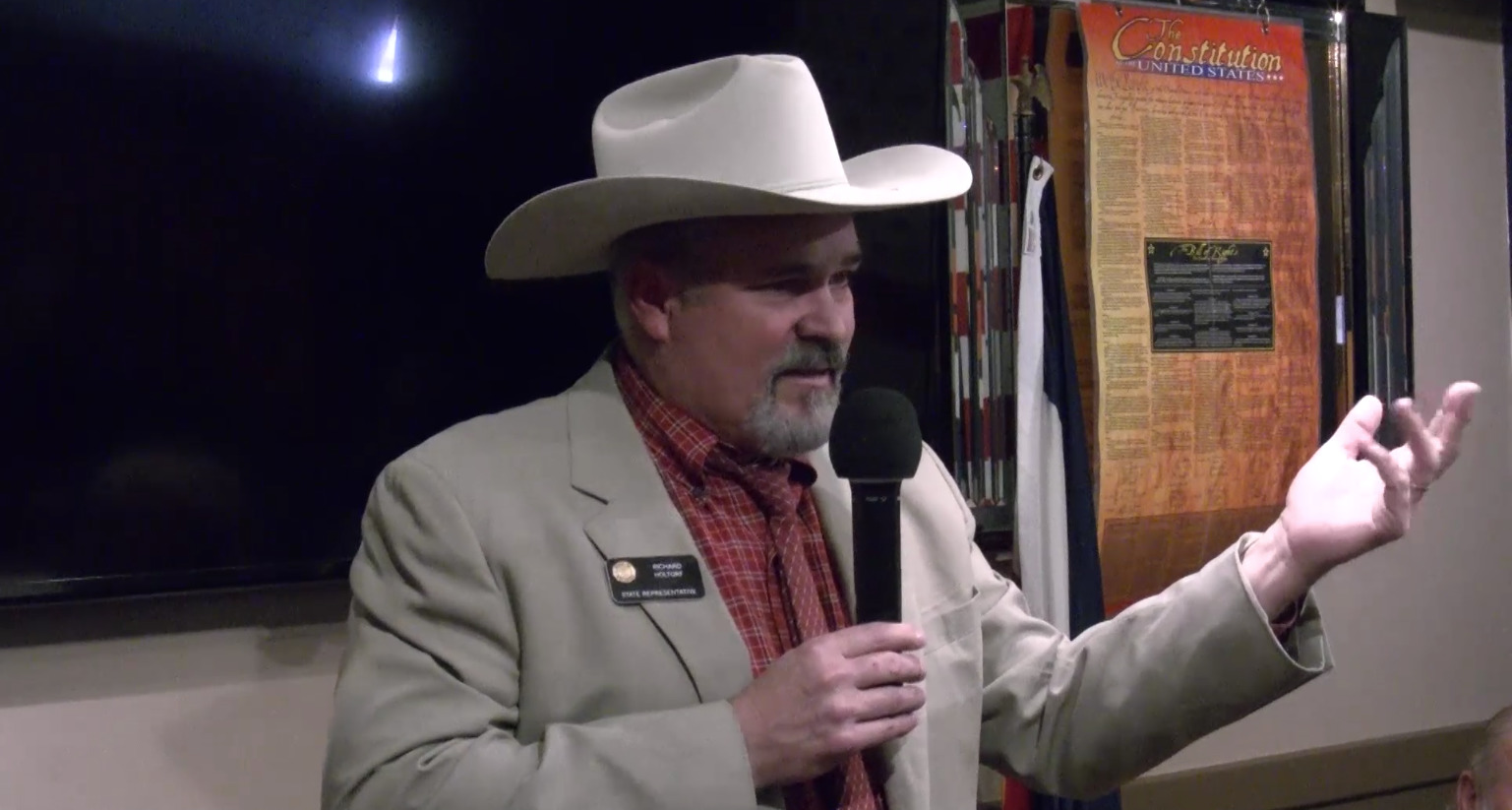 As two-to-one underdogs in the Colorado House, and losing another seat to to the Democratic senate majority last November, Holtorf identified only one silver lining for Republicans: that the Democrats had to spend $6 million to gain one legislative seat.

Holtorf said the GOP invested about half as much in trying to secure legislative seats.

With majorities in both chambers and Democrat Jared Polis in the governor’s office, Republican bills such as Holtorf’s HB21-1176 to initiate a comprehensive audit on Colorado election processes are doomed to die.

“We ran eight bills for election integrity and voter reform. I ran one. They went to the state affairs committee. And the Democrats who had the majority in that committee killed every one of them. […] None of those issues that were brought up are going to be addressed at this time because the secretary of state [Jena Griswold] isn’t interested, and the majority party thinks there’s not a problem and we know better. We know better in this state. […] You want to fix election integrity and election reform? We’ve got to get rid of her.”

Holtorf’s suggestions to Republicans for turning Colorado’s political tide from blue to red were not new. They included raising more money for campaigns, building a bench of young people to run for office, winning seats at local levels (“thankless jobs” that “suck,” according to Holtorf) and persuading unaffiliated voters with micro-targeted positive messaging.

But Holtorf also angrily scolded Republicans, calling for an end to the circular firing squad among candidates in primaries.

During his talk, Holtorf referenced a few Republicans who have divided conservatives’ favor:

“Now, I know that Liz Cheney is from Wyoming and that she’s pretty moderate. And also I believe she was an anti-Trumper and, you know, had some issues that came up last year.” [Cheney, in fact, has relatively conservative, Pro-Trump voting record in Congress, and has said she voted for Trump in both the 2016 and 2020 elections.]

“You know, [gubernatorial candidate] Greg Lopez is out in front. He’s got a lot of good qualities, but the field hasn’t been set. Okay, so let’s not get ahead of ourselves. Of the candidates that you see right now, that is the horse that’s trotting around the track and looks like the one that’s probably the best. But I haven’t seen all the horses. Some of them are still in the barn. Some of them haven’t come out of the paddock yet. […] I don’t give a care who’s in there, as long as Polis is out, between you and me, and [as long as] that person believes in Republican principles.”

“Colin Larson, anybody know him? Yeah, of course you do. He represents [the district] right around here. […] He’s very moderate. He’s young. He is somewhat compassionate and idealistic on some of the social values. [One attendee asks if Holtorf kicks Larson every once in a while, presumably to keep him in a more conservative line.] Well, I jibe him a little bit. I don’t know if I should kick him.

“But if he was a Democrat, I’d want to punch him in the face. [waving away the camera] Don’t film that! Some Democrats, not all! Because I don’t get along with a lot of them. They bring really bad ideas to town. and they promote really bad policy and they don’t care — a lot of them — about our traditional values and what made America great, what makes America great, what the Constitution means.”

Holtorf later conceded he was joking about punching Democrats, and reversed his aggressive tone to say, “We can’t try to denigrate, you know? […] We have to try to work with them. We have to try to convince them that they’re wrong and they’re going too far.”

He called for compromise between the left and the right, a concept embraced by moderate GOP legislators, but which has met with strong resistance from some current and former leaders in the CO GOP.

However, despite his plea for civility, Holtorf’s rant against Democrats continued throughout his speech:

“But the problem is those damn Democrats — any Democrats in here? a voice in the audience yells, ‘Kick ’em out! Kick ’em out!’]. I work with Democrats every day, and some of them I actually get along with. Most of them I don’t. […] If you can’t spell ‘socialism,’ it starts with an ‘S’ and ends with ‘ah, shit!’ okay? Because it’s coming. They want it to be here. […] And I say today, I’ll kill a commie for my mommy. I sang the jodies in the Army for years, a long time — 29 years is a long time, okay? And I believe communism has no compatibility with our republic. Yeah, socialism has no compatibility with our republic. But I’m telling you, the Democrat Socialists are moving that way. They are migrating that way. They are taking this thing incrementally in that direction, and they’re even doing it faster now.”

But Holtorf’s derision of Democratic leadership and lawmakers as well as legislative bodies controlled by Democrats, as evidenced by the following quotes, will undoubtedly erect substantial roadblocks to compromise:

“We, as Republicans, have already been accused of screwing up their [legislative] calendar. But frankly, I don’t give a rat’s rear end about the Democrat majority’s calendar. They can shove it you-know-where! We’re not going to help them work through this onerous calendar.”

“Well, that [last year’s COVID legislative recess] got pushed back a week. The reason that got pushed back a week is because the governor knew that the COVID-19 relief money was coming from the feds. That was an intentional move where [Gov. Polis] coordinated with the president of the Senate and the Speaker of the House and said, ‘No, kick the can down the road a week because I want to spend a bunch of money!’ And he did. He spent a shit ton of money and didn’t even talk with the JBC about any of them. And they were actually meeting. So he spent his money and then he said, ‘OK, Joint Budget Committee, you can have the rest. Here’s your cut.’

“But the Joint Budget Committee is full of Democrats. […] There is a speed dial to the governor’s office about all this [stimulus funding] mess. I think [Sen. Dominick] Moreno might be the one that answers the phone when the governor calls, ‘What do you want, Governor? Well, you don’t want that? Okay, well, we’ll talk to the committee. You want that? Okay, we’ll work on that.’ And that’s about how it’s going down.”

“We had Representative [Leslie] Herod run an orbital bill for $5 million for more marijuana shops in the BIPOC community. You probably don’t even know what BIPOC is. I had to learn it about a week or a month ago. It’s ‘black, indigenous, and people of color’ communities. I said, ‘Representative Herod, do you really think they need more marijuana in those communities? Because I daresay there’s enough! And it’s everywhere. You go in the back alley and buy it, you don’t even need a shop. But but she says, ‘We’ve got to have ours. You know, they’re making money and we want to get ours in our communities, communities of color. We got to get more pot shops.'”

“And it’s a union thing. So it’s the farmers’ union bill of Rights. It’s garbage. It’s a terrible bill. […] No, it’s the it’s the Agricultural Union Bill of Rights that allows for the unions to set up in Ag labor. […] She [Jessie Danielson] claimed to be a dairy farmer kid or something and grew up somewhere in the country. Well, she doesn’t know what the hell she’s talking about. She’s a damn fool! […] And she’s probably bought and paid for by the unions. “

“You can’t talk to her [Rep. Monica Duran] because she sold out to HSUS. […] Humane Society of the United States, they’re one of the most well-funded animal rights activist organizations in the United States. They have a treasury of over $300 million dollars. They’re the ones that show […] on the TV that says for $19.99, you’ll save a puppy. Well, they don’t tell you that picture of that puppy was taken 20 years ago in Afghanistan or freakin’ Tasmania or some third world country you can’t even pronounce. And they’re still playing that same little video of a downtrodden dog. […] And they have quite a war chest and they use some nasty business and they’re always working the legislature and they’re getting their hired guns to do their dirty work.”

Later, on May 5, Holtorf was the center of controversy on the House floor when he referred to a colleague as “Buckwheat,.” He was later admonished by House leadership and apologizing for using the racist term.

Below, listen to an audio recording of Rep. Holtorf’s address to JCRMC on April 12, 2021: