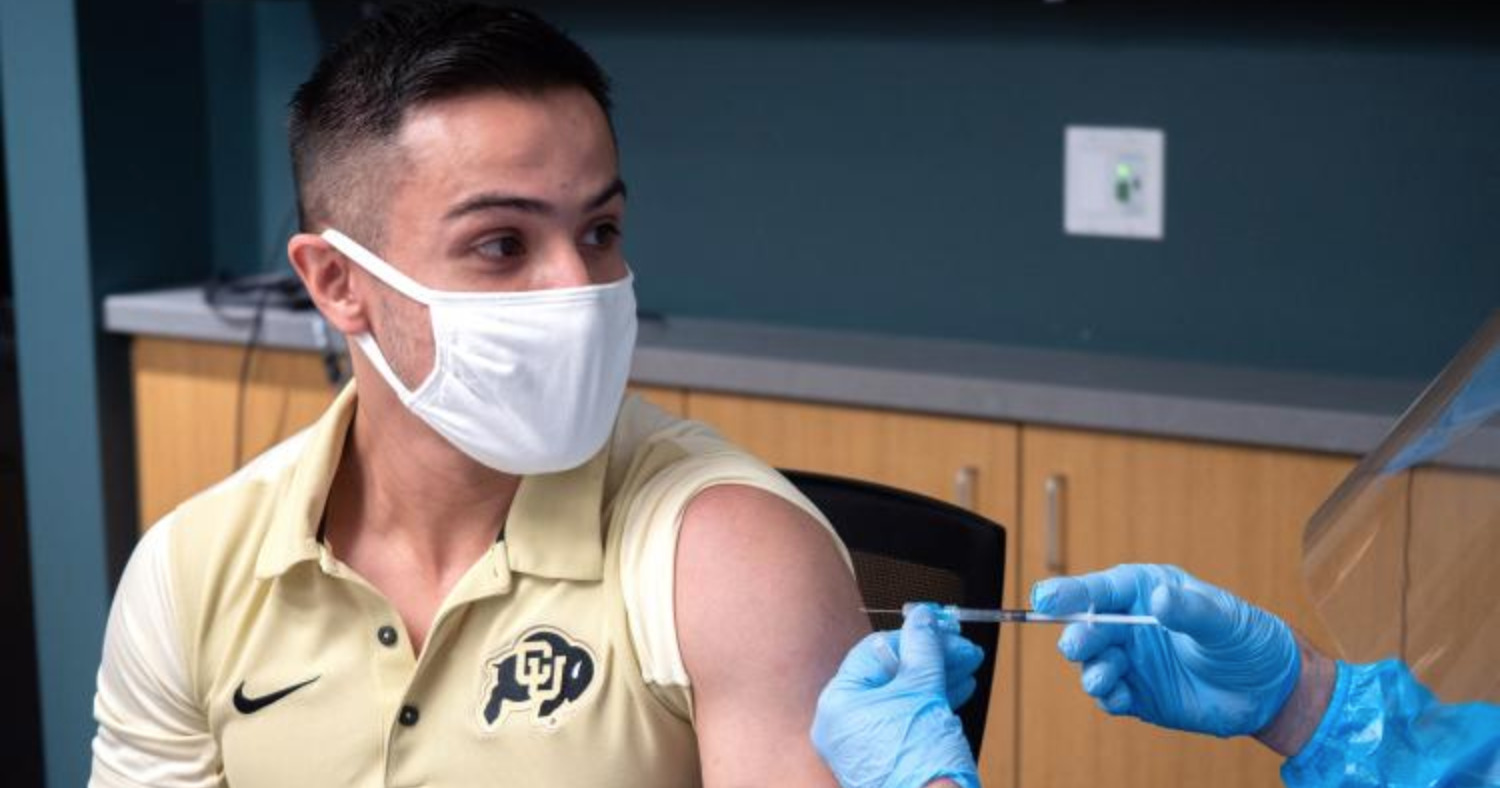 CU Regent Chance Hill believes the University of Colorado’s vaccine requirement for on-campus students, faculty, and staff is a bad idea, and he says he’s not the only Regent who thinks so.

CU, along with several other Colorado colleges and universities, announced the requirement, which includes a process for requesting medical and non-medical exemptions, last week after previously saying vaccines were encouraged but not required unless the state decreed otherwise.

Once the state, via both the Colorado Department of Public Health & Environment and Governor Polis, weighed in, saying it supported (though didn’t order) an on-campus vaccine requirement, most institutions announced new rules for the fall semester. Last fall, CU Boulder endured Colorado’s single largest COVID outbreak, when 12 staff members and nearly 1200 students tested positive for the coronavirus.

In an April 30 Facebook post, Hill wrote that he opposes the vaccination requirements for “ethical, administrative, and legal reasons” and will introduce a Board resolution “with the aim of overturning this misguided administrative decision.”

Many of Hill’s arguments lean heavily on the fact that the FDA hasn’t formally approved the vaccines yet but is permitting their use under an emergency-use authorization.

Denver University Law professor Govind Persad and Holly Lynch, who teaches medical ethics at the University of Pennsylvania, rejected that distinction in a May 4 Washington Post column, “Yes, it’s legal for businesses and schools to require you to get a coronavirus vaccine.”

“The FDA allows their use because it determined that the vaccines’ known and potential benefits outweigh their known and potential risks and that they “may be effective” in preventing the coronavirus,” write Lynch and Persad. “Each vaccine demonstrated safety and efficacy in clinical studies to the FDA’s satisfaction under this exceptional emergency standard.

“But can the vaccines be required [prior to approval]? …those challenging mandates in court, point to language in the FDA’s emergency use authorization statute indicating that people receiving such products must be informed ‘of the option to accept or refuse administration.’ … But the relevant text doesn’t stop there… Patients also must be given information about ‘the consequences, if any, of refusing administration of the product.’ Clearly, then, consequences for refusal can coexist with the option to refuse. The FDA doesn’t specify what those consequences might be, but it also doesn’t limit them. ”

Reached by phone, Hill said he hopes and believes that the FDA’s emergency-use authorization will be replaced by full approval prior to classes starting up, but even if that happens, lawsuits could still be a problem.

“I think most people expect that they that the FDA will issue actual formal approval prior to [the start of classes] during the summer, said Hill. “But if not, regardless of what the DU professor says, I can line up professors or lawyers around the block who would suggest that [the vaccine requirement] could open us up to legal exposure. So let’s just hope that the authorization is lifted, especially in case the vote fails, because I certainly don’t want to have CU incurring needless liability.”

Hill also explained the next steps of bringing his resolution to the Board. Prior to the full Board’s June meeting, Hill says he will raise his objections to the vaccine requirements at the next University Affairs Committee meeting on May 20, as a means of starting the discussion.

Hill also compared enforcement of a vaccine requirement to being forced to “show papers,” invoking an authoritarian phrase to make a privacy argument. He also referenced the reproductive rights slogan “My Body, My Choice” slogan, implying that pro-choice advocates who also support vaccine requirements are being hypocritical.

Hill concluded his public opposition by writing that “Colorado taxpayers deserve to know where each Regent stands on this issue and on the record. I know I am not the only Regent who holds this position.”

The next day, Hill’s Republican colleague Heidi Ganahl brought up the issue of opting out of CU’s vaccine requirements and noted it would be on the June agenda, as Hill had announced.

She encouraged her followers “who want to provide feedback to contact the full Regent Board before then.” Ganahl did not return a voicemail inquiring as to her position on the issue.

“Making the COVID-19 vaccination MANDATORY is bad policy for ethical, administrative, and legal reasons. I would support the notion of encouraging CU personnel and students to take the COVID-19 vaccination—but not requiring it. And the transactional costs associated with someone demonstrating a need for an exemption based on religion, health, or personal belief is burdensome and invasive.In fact, the process of obtaining an exemption will sometimes be onerous (possibly including having to reveal private medical information or otherwise “show papers”). And if you have already received the vaccine, I hope you didn’t lose your vaccination card.This is not appropriate. It amounts to paternalism run amok. Again, I am fine with encouragement—but a mandate for such a personal decision is wrong in my view, especially when the vaccination is not even officially FDA-approved (still in the Emergency Use Authorization phase). I guess for some people the whole “my body, my choice” logic doesn’t apply in this context. Which strikes me as hypocritical. Consequently, I intend to introduce a Board resolution opposing this mandatory measure on the three primarily undergraduate CU campuses (UCCS, CU-Denver, and CU-Boulder)—with the aim of overturning this misguided administrative decision—at the next meeting in June. If nothing else, I think Colorado taxpayers deserve to know where each Regent stands on this issue and on the record. I know I am not the only Regent who holds this position.”