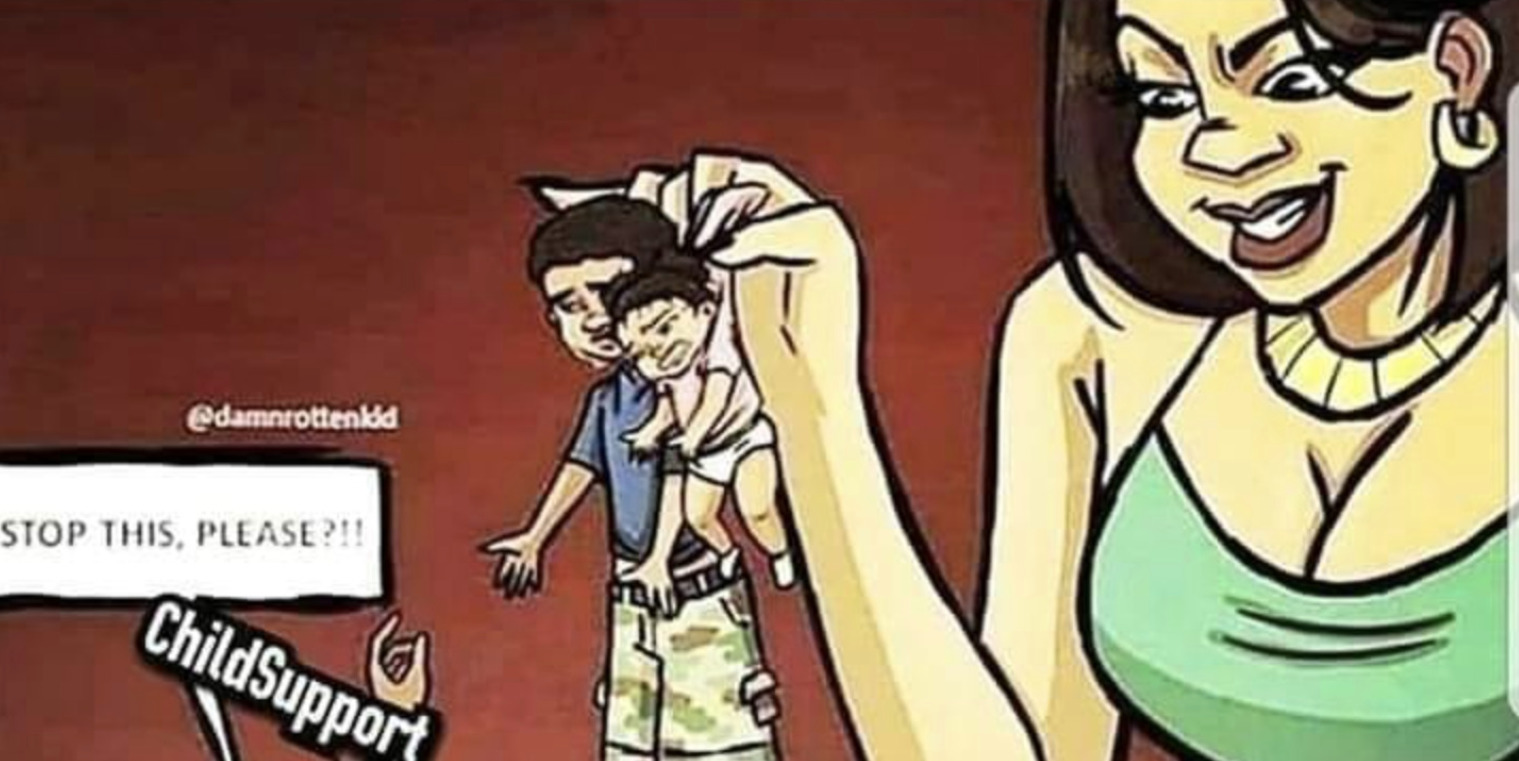 The father is tied back with ropes labeled “child support,” “back pay,” “interest,” “warrants,” “lies,” “alienation,” “suspended license,” and “alimony.” The father is saying, “STOP THIS, PLEASE?!!” and the cartoon is captioned, “Real Dads Against DeadBeat Moms.”

Parchment, who is the original poster of the cartoon made by someone by the handle @damnrottenkid, adds his own insights below:

“A friend shared this. I’m thankful my Mother never ever denied access to my Father or used us as a pawn. For the many Men being tortured by Females who use children as a pawn, I pray for you & the kids. Millions of Children don’t have a Father present because a Mentally Damaged Mother wants to prove a point & hurt a good man. Don’t encourage or cheer these women. Call them out unless you are gonna help with bail money for a teenager who thinks his/her Dad abandoned them. She’ll blame him for that too. SALUTE to the Mothers who acknowledge a Father is also needed in a child’s life. #DadsTrauma“

Last year, Parchment ran for the Senate District 23 seat, which encompasses Broomfield and some surrounding areas, losing against state Sen. Barbara Kirkmeyer (Brighton) in the Republican primary. He is currently an elected Weld County Councilman.

Parchment’s loud opinions have been covered by the Colorado Times Recorder before. He attended anti-abortion and anti-vaccination state capitol rallies, and has compared COVID-19 contact tracing to forcing Jews to wear a Star of David, or to Jim Crow laws. He’s also spoken out about child trafficking.

McCallister, who’s up against Rick Taggart in the Grand Junction City Council election April 6, was formerly Vice-Chair of the Mesa County Republican Party, and he’s no stranger to controversial Facebook posts.

He shared multiple racist posts in the past, including one of Trump placing a noose around the neck of Obama, which led a Mesa County Commissioner to rescind her endorsement of him.

This week, McCallister told the Grand Junction Sentinel that the Colorado Times Recorder’s story about his posting the Obama-Trump-noose meme was “baseless,” but we stand by our reporting.

McCallister has yet to explain how the meme landed on his Facebook page.

McCallister hung up on the Grand Junction Sentinel “before The Sentinel could ask him about his recent social media activity,” the newspaper reported.

The meme caught the eyes of several other conservative names.

Lesley Hollywood, conservative and gun rights activist, commented on Parchment’s post to argue that the problem “goes both ways,” claiming that her child’s father has prevented their daughter from traveling to see him.

“Even the score… Find some old sex tapes and nude pictures… Threaten to blast them shits to her co-workers if she doesn’t act right… You gotta play dirty with dirty people… That’s the language they understand.”

“Men need to do a lot better for their kids and their baby’s mom. Do your part, be a good involved father, and support your kids. Be consistent. Stop being selfish. SMH. Shout out to the dads who work hard to be a good parent. The rest, you need to grow up and do better!”

According to the National Conference of State Legislatures (NCSL), a “bipartisan organization providing states support, ideas, connections and a strong voice on Capitol Hill,” “the child support program serves one-fifth of all U.S. children and one third of all U.S. children in poor families—totaling 14.7 million children.”

The NCSL also argues that regular child support payments are important for optimizing the lives of both children of divorced parents as well as relationships between children and parents.

And while messy divorces, including ones where parents use children as “pawns,” are real adverse childhood experiences, there’s not much research supporting the narrative that custodial mothers requiring state-mandated child support from the father are evil or manipulative.

In fact, research from the UCLA Women’s Law Journal suggests that many domestic abuse victims are afraid to go after batterers when they fail to pay child support or not enough, and that domestic abusers sometimes use large child support payments as a way to guilt trip the victim into letting the abuser stay in close contact.