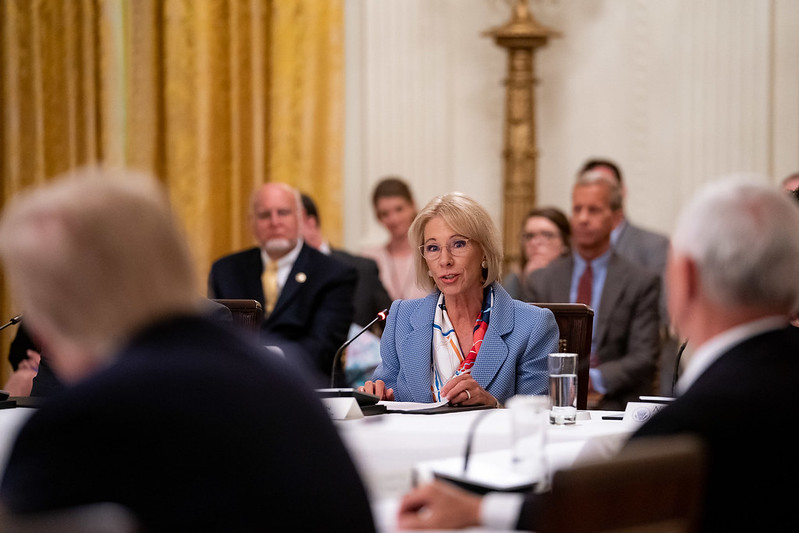 The coronavirus pandemic has “revealed the massive deficiencies of much of the public school system,” Education Secretary Betsy DeVos told conservative activists Wednesday.

“Many [school districts], frankly, have not really taken their customers — you know, their students and their families — into consideration, and that’s really given them no choice,” DeVos said.

DeVos, a strong proponent of private and charter schools, singled out the Fairfax County Public Schools district — which is located in the suburbs of Washington, D.C. — for not “leaning into” the challenge of keeping schools open for in-person learning, during a conference call with the Phyllis Schlafly Eagles, a conservative group that supports “traditional education.”

“They spend over $16,000 per student per year in Fairfax County, and they went through the summer pretending to give their families a choice of a hybrid half in-person, half remote learning,” DeVos said. “And then, about a month left before school was set to reopen again, they said, ‘Sorry, we’re going to be all remote learning for the foreseeable future.’”

Fairfax County Superintendent Scott Brabrand told families in August that the district would go remote after a spike in cases in the Washington-area. More than 16,000 cases have been reported in the county since March.

“The primary factor in deciding to go 100% virtual is the continuing health risks associated with COVID-19,” Brabrand stated in a message to parents at the time. “The safety of those entering our school buildings must be our prime consideration as we do everything we can to protect students and staff.”

DeVos also told activists that the pandemic “in a very unexpected way … can bring around the kind of change that we need to see for K12 education” as more families look for alternatives to public education, such as private or parochial schools and homeschooling.

One of those changes, DeVos suggested, is the School Choice Now Act that Senate Republicans introduced in July. The bill would provide a one-time cash infusion to scholarship-granting organizations that could then pass that money on to families that want to enroll their students in nonpublic educational settings. It would also establish a permanent federal tax credit up to $5 billion for donations from individuals and businesses to these organizations.

DeVos argued that tax credits would be a “tremendous boost” for states that have been sitting on the fence with introducing a school-choice program in their states to do so.

“I think about over 100 Catholic schools that we know of that have had to close down. It would help families whose children are in schools like that immediately,” DeVos said. “So, it’s a really important piece of the solution.”