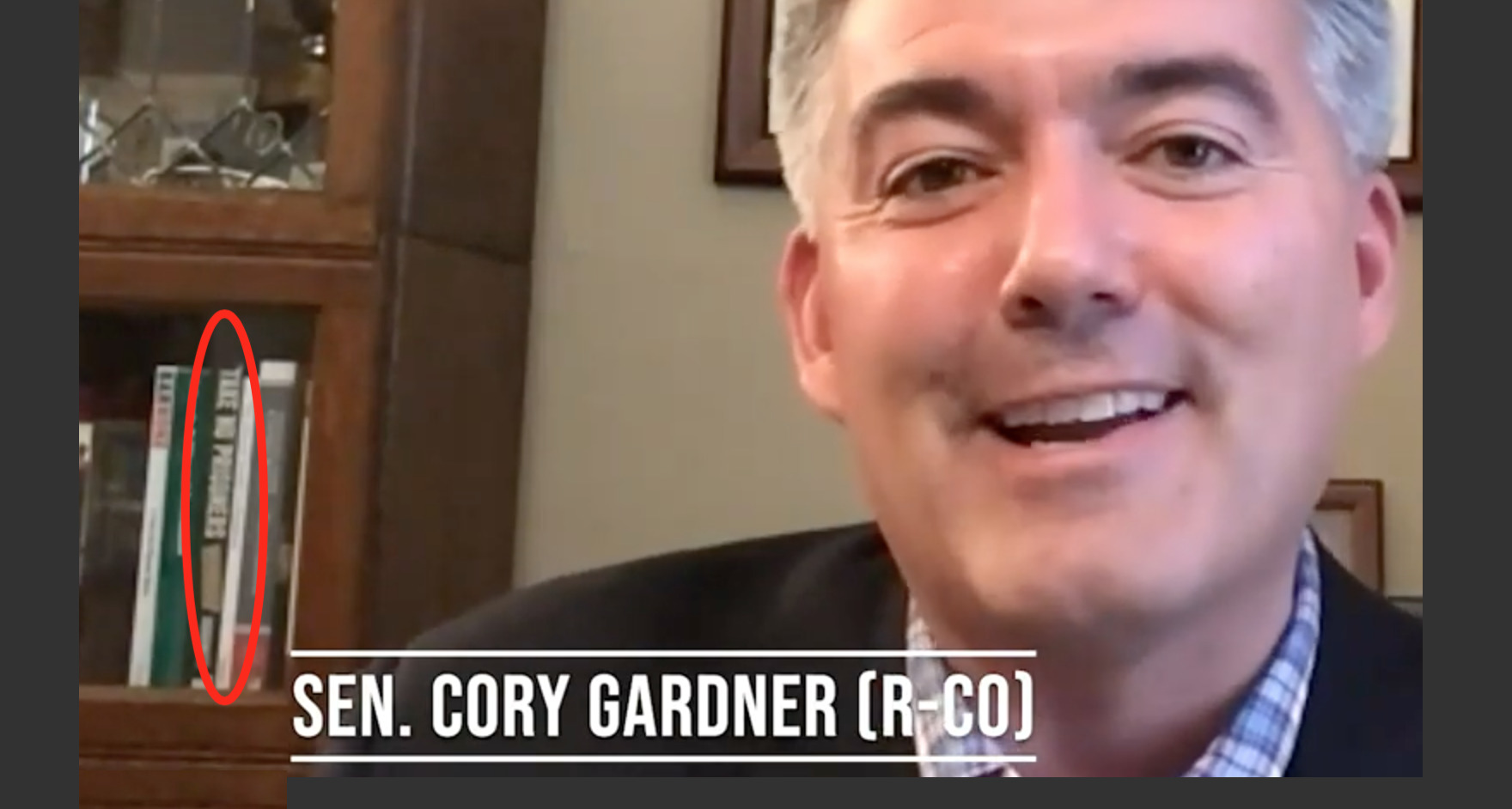 During a brief virtual interview with a local Colorado Springs news station last night, Sen. Cory Gardner (R-CO) offered viewers a glimpse at some of the books on the bookcase behind his desk. Most prominent among the visible titles is “Take No Prisoners” by David Horowitz, an unapologetic racist ideologue known for his anti-Muslim and racist statements.

Horowitz, whom the Southern Poverty Law Center considers an anti-immigrant and anti-Muslim extremist, has proved so offensive in recent years that being seen as associating with him has created problems for corporations and politicians alike.

In 2018 Florida Governor Ron DeSantis refused to answer questions about his speeches at Horowitz conferences.

A week later Verizon canceled its membership in the American Legislative Exchange Council over the group’s selection of Horowitz as a conference speaker.

“Our company has no tolerance for racist, white supremacist or sexist comment or ideals,” a Verizon spokesperson told the Intercept at the time.

In subsequent weeks, AT&T, Dow Chemical and Honeywell both followed suit, dropping out of ALEC due to its association with Horowitz.

Neither the Gardner campaign nor Horowitz immediately responded to email requests for comment. This post will be updated with any response received.

Horowitz’ offensive beliefs and statements are legion, but here are a few of the worst, most of which were compiled by Southern Poverty Law Center.

“If blacks are oppressed in America, why isn’t there a black exodus?”

In an article arguing against reparations for African-Americans, Horowitz wondered where their gratitude was for the white soldiers and white president to whom [African-Americans] owed their freedom.

“If not for the sacrifices of white soldiers and a white American president who gave his life to sign the Emancipation Proclamation, blacks in America would still be slaves … Where is the gratitude of black America and its leaders for those gifts?”

—“Ten Reasons Why Reparations for Slavery Is a Bad Idea — and Racist Too,” FrontPage Magazine, January 3, 2001

His FrontPageMag website published an article titled “Why Muslim Rapists Prefer Blondes: A History,” which purports to explain “violent Islamic lust for British and Scandinavian girls.”

“The Palestinians are Nazis. Every one of their elected officials are terrorists.”

Horowitz asserted that an anti-lynching memorial in Alabama was anti-white racism, tweeting: “I’m merely exposing the anti-white racism of the lynching project. Lynchings were bad but they weren’t mainly about whites yanking blacks off the streets and stringing them up.”

“Obama is an anti-American radical and I’m actually sure he’s a Muslim, he certainly isn’t a Christian. He’s a pretend Christian in the same way he’s a pretend American. It really is disgraceful. He’s inviting the terrorists to behead more Americans when he should be attacking them with our military. His whole agenda in office has been to defeat America, he lost the war in Iraq deliberately, he created a vacuum which ISIS has filled.”