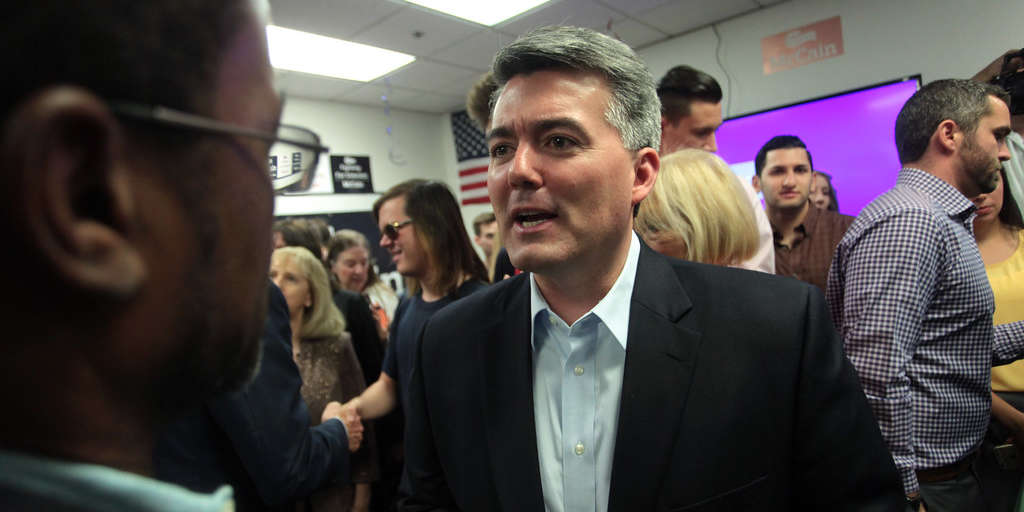 Earlier this month the Senate Leadership Fund (SLF), a major source of funds for Republican U.S. Senate candidates, pledged $21 million in radio and television advertisements across five states to defend vulnerable Republican incumbent senators. Colorado was not one of those states.

The news prompted the progressive blog Colorado Pols to declare that the  “end is here” for U.S. Sen. Cory Gardner (R-CO). Indeed, the dark clouds enveloping Gardner’s campaign could prompt national Republican groups to follow the SLF’s lead in funneling money to more competitive races as Republicans try to defend the Senate majority.

The University of Virginia’s Center for Politics ranked Gardner the most likely Republican incumbent to lose in November, and he has been consistently polling behind former Gov. John Hickenlooper.

However, even taking into account Gardner’s bleak situation, political strategists in Colorado do not think the GOP has given up on Gardner yet.

Andrew Baumann, a Democratic pollster and strategist, resists labelling the SLF’s pull-out as giving up.

“It might be the smart thing for them to do, given Gardner’s numbers, but I haven’t seen or heard anything about the GOP abandoning him,” Baumann said.

In another setback for Gardner, the Colorado GOP was given $700,000 by the Republican National Committee, less than half the amount they gave to Arizona, Florida, Wisconsin, and North Carolina. Those are all battleground states with a vulnerable Republican senator up for re-election.

One reason for this could be that President Donald Trump’s campaign is not prioritizing Colorado. In July the Trump campaign reserved $100 million in advertisements across the country, but not in Colorado.

Baumann is hesitant to use the Trump campaign advertising as a bellwether for Gardner’s campaign.

“I wouldn’t say that the Trump campaign not investing in Colorado is any reflection of Cory,” Baumann said. “It’s a reflection of the road ahead because it’s going to be hard for him to win when Trump is doing so poorly.”

Gardner’s weaknesses as a candidate

Steve Welchert, a Democratic political consultant, said that Republicans do not view Colorado as a presidential battleground state anymore, which is not good for Gardner. Since Gardner won in 2014, Colorado voters have only elected one GOP candidate — University of Colorado Regent Heidi Ganahl — to a statewide office.

“Colorado used to be known for ticket-splitting,” Welchert said. “Those were all in races, in the 80s and 90s, that were pretty hard fought and close. Colorado is becoming more monolithic; the vote modeling has gotten dramatically bluer in the last couple election cycles.”

Gardner will likely have to rely on split-ticket voters to win this election. A Republican presidential candidate has not won in Colorado since 2004 and Democrat Joe Biden is leading Donald Trump by 13 points in multiple polls.

“When you look at split-tickets you’ll find that maybe 3 or 4% of the population will do that,” Welchert said. “But if you’re Cory Gardner you need to find 10 percent of people who will split their vote. That’s going to be Gardner’s challenge.”

RELATED: Is Gardner Testing the Waters for a Break With Trump?

Floyd Ciruli, a Colorado pollster and political analyst, does not believe Republican donors are going to back away from Gardner. He argues that Gardner is too close to leadership to forsake, but Ciruli can’t ignore the difficulties that Garner will face in his campaign.

“If you look at Arizona, the presidential race is close,” Ciruli said. “Same with Montana. The president may well carry North Carolina. It will be close in Maine. Nobody thinks Colorado is going to be close at the moment. There’s no way the Trump campaign is going to spend big in Colorado because you can’t find a poll that has Trump within ten points. And that is Cory’s problem.”

Not over yet for Gardner

While there is some evidence that the GOP has deserted Gardner and some arguments that he should be abandoned in favor of other candidates, Gardner is still seeing plenty of support, both financial and on the campaign trail.

In late July, first daughter Ivanka Trump campaigned with Gardner in Greenwood Village to discuss the importance of early childhood education. Donald Trump commended Gardner during the signing of the Great American Outdoors Act in early August. Last week in emails obtained from a source, and sent by the Gardner campaign, Trump asked supporters to donate to Gardner’s campaign.

“We need people like Cory fighting for Americans,” Trump’s email reads. “Cory loves his state and the people of Colorado, like no one I’ve ever seen. We have to support him, and we have to bring him back to the Senate.”

In March the SLF committed $5.5 million in advertising in Colorado to run from Sep. 8 until election day. One Nation, an affiliated non-profit, and the National Republican Senatorial Committee (NRSC), a group dedicated to elected Republican senators, are advertising for Gardner as well.

Not until mid-September or early October will national Republican groups, like the NRSC, decide whether to desert Gardner, according to both Welchert and Ciruli “It’s important to note that McConnell’s PAC is pulling away,” Ciruli said. “That’s an important factor. But there is still quite a lot of other dark money in this race. Maybe on October 1, if Gardner is down 6-8 points, you’ll start to see them give up on him, but not yet.”

Correction: This story was updated to include the SLF’s advertising commitments in Colorado leading up to the election.