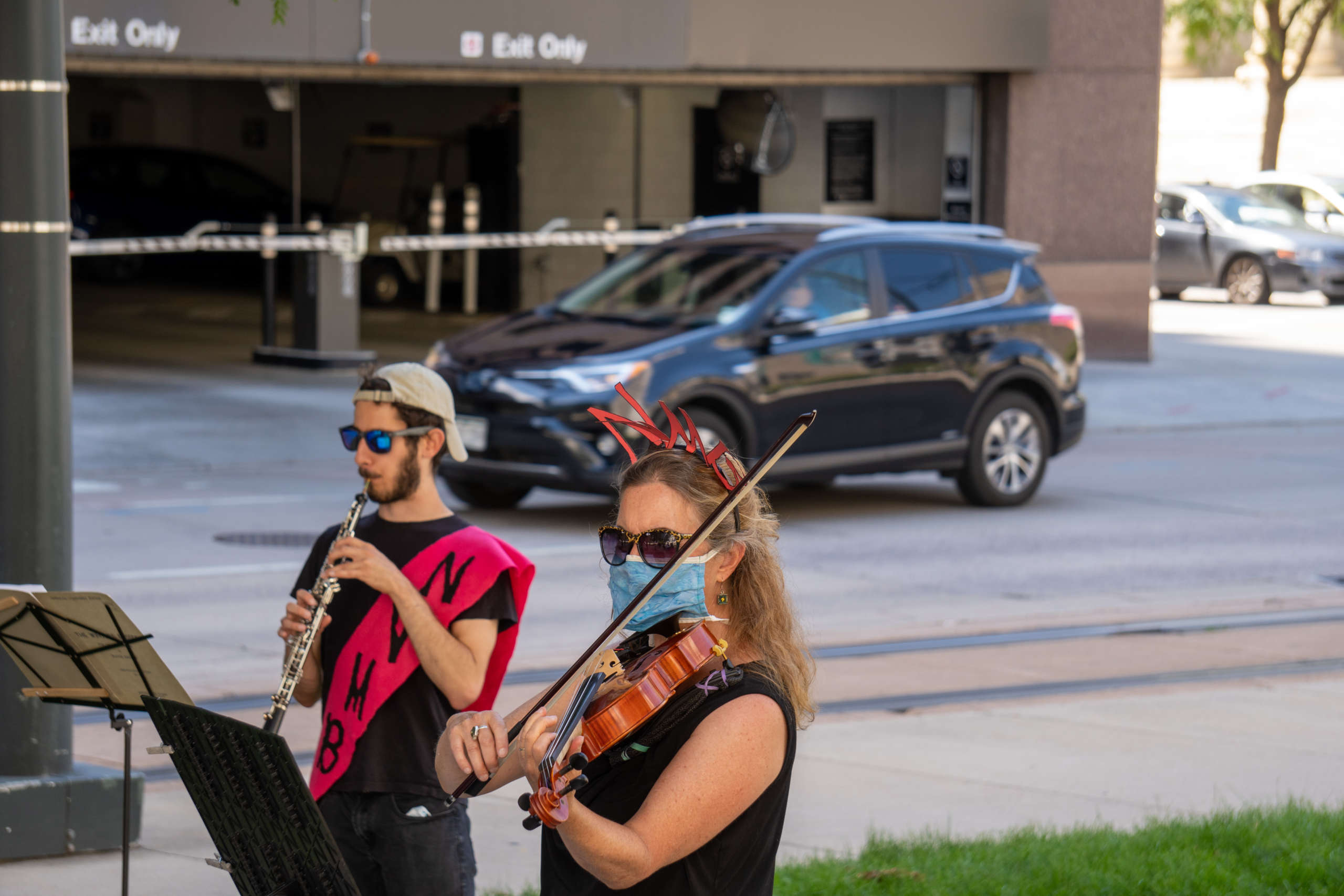 The Non-Violins Marching Band (NVMB), a Colorado activist group whose name is a play on “nonviolence” and the fact that the group mostly plays violas rather than violins, asked U.S. Sen. Cory Gardner (R-CO) Monday afternoon to support a full extension of federal unemployment benefits.

The music started a block away from Gardner’s downtown Denver office with renditions of songs like “Amazing Grace” and chants supporting the proposed HEROES Act of “Please pass the act today; we have bills to pay.”

The band then marched to Gardner’s office while playing a song called “Don’t Stand with Trump on This” to the tune of “Don’t Stand So Close to Me” by The Police.

Leah Kovach, a member of the band, told the Colorado Times Recorder that unemployment benefits are important in lives like hers.

Federal unemployment insurance was expanded under the CARES Act — passed in March — to an extra $600 per week. On Monday Senate Republicans and the White House agreed on a proposal for a new coronavirus stimulus package that would cut the extra aid to $200 per week through September.

Starting in October states are expected to implement a new percentage-based unemployment formula that limits the amount the federal government is required to contribute.

Speaking with presidential advisor Ivanka Trump at a preschool in Greenwood Village over the weekend, Gardner said he supported another direct stimulus check and an extension of expanded unemployment benefits but did not give an exact amount he would support.

“Let’s not create a disincentive to work, but let’s make sure that we’re taking care of people,” Gardner said at the event.

Research has found that unemployment benefits are especially helpful in the midst of the recession because those who receive them are more likely to spend it.

The NVMB is a group of violists who initially met playing for the Colorado Symphony. They decided to form a group before the Women’s March in 2017 and have since been performing at climate action events, healthcare rallies, and other events in the Denver community.

Helen McDermott, one of the leaders of the group, organized a petition asking Gardner to support extending the increased benefits and wanted to bring the petition to his office in person.

Musicians are relying heavily on unemployment benefits during the pandemic, which is why McDermott thought the NVMB could focus Gardner’s attention on the issue. \

A study by the Musician’s Union—which has 32,000 members across the country—showed that a fifth of musicians worry that the pandemic will end their careers.

“The majority of professional musicians and other performers have lost most or all of their work due to COVD 19,” reads the petition. “They are likely to be the last workers to be able to return to normalcy and are dependent on unemployment benefits in the meantime. The federal unemployment benefits have been instrumental in helping performers keep their heads above water.”

McDermott pointed out that state unemployment benefits on their own will not be enough for some families.

“The majority of professional musicians are either mostly out of work or entirely out of work,” McDermott said. “We can’t get by on state unemployment benefits alone we need federal benefits as well until we can get back to work.”

The NVMB also left a voicemail, or a “Violagram” according to McDermott, at Gardner’s Colorado and Washington D.C. phone number.

“We would like him to support the HEROES Act especially keeping expanded federal unemployment provision.”

A representative from Gardner’s office said Gardner was not in Denver for the day but still took the band’s petition. His office did not return a call asking for Gardner’s stance on the unemployment provisions in the HEROES Act or the proposed Republican stimulus bill.

Kovach said she believes in unemployment benefits because they provide the safest route towards beating COVID.

“We’re all in this together and we can get through this if we all work together,” Kovach said. “We just need to support the people who need help the most.”