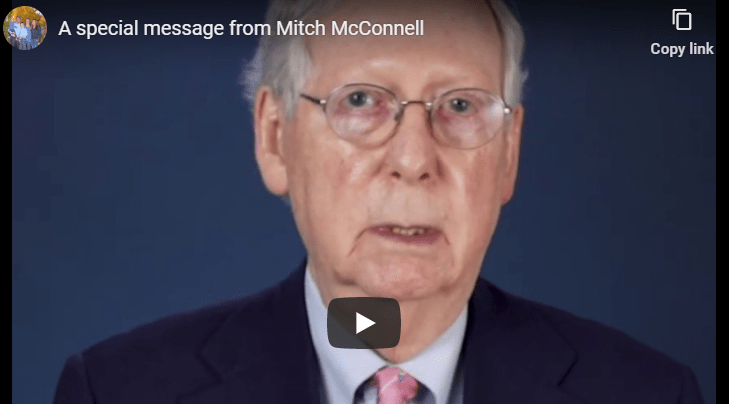 But over the weekend, Gardner’s campaign went further, blasting out an “exclusive video message” from McConnell imploring Republicans to “step up and help Cory Gardner, one of our most effective leaders in the Senate.”

“Help him fight off Schumer and the radical left,” says McConnel in the video.

The McConnell video starts with, “Chuck Schumer only needs to flip four seats to take away our majority. We have to stop him.”

The video concludes with a request to “chip in” to Gardner’s campaign and “defend the Senate majority.”

The Gardner-for-Senate email, obtained from a source, containing the McConnell video states:

Gardner Campaign Fundraising email: The Senate Majority is in trouble…which is why Mitch is calling on YOU to stand with Cory Gardner and his fellow Senate Republicans in 2020.

Chuck Schumer is rallying his donor base to take down Cory by flooding Colorado with cash and resources for his opponent.

We can’t allow the far-Left to dictate the narrative in Colorado and sling unchecked attacks at Cory and all of his incredible work to help Colorado THRIVE over the past six years.

McConnell is the least popular politician among Colorado voters, according to a poll released by a progressive pollster last month.

The same poll, released by ProgressNow Colorado and conducted by Global Strategy Group, found that Gardner himself is viewed negatively by 46% of Colorado voters, slightly better than McConnell’s 53% unfavorability rating.

Progressive groups have been spotlighting Gardner’s close ties to McConnell and even launched a multi-pronged campaign asking Gardner to “cut ties” with the majority leader, with whom Gardner has served in a Senate leadership role since 2016.

Gardner once laughed off a letter, signed by Colorado House Speaker KC Becker and other Colorado Democrats and groups, asking Gardner not to vote for McConnell again, if Gardner is re-elected in November.

So why would Gardner promote a video by McConnell, who’s so unpopular? Experts have pointed out that GOP donors may be particularly receptive to the argument that the Republicans must retain the Senate majority. And it may be particularly potent coming from McConnell. So, they say, this is the messenger and message Gardner is using in at least some fundraising appeals to his donor audiences.