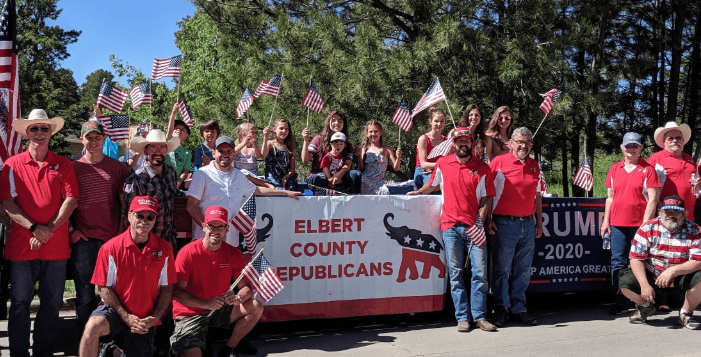 Elbert County, Colorado, Republicans aren’t buying the news that Trump’s rally in Tulsa over the weekend was a bust, with lots of empty seats, amid speculation that Trump supporters were scared they might catch COVID-19 at the much-publicized event.

The Elbert County Republican Party posted what it called “the rest of the story” about the Trump rally on its Facebook page.

The alleged rest of the story included the falsehoods that 5,000 people were prevented from entering the arena and 20,000 people were “turned away outside due to PROTESTERS BLOCKING entrances and ATTACKING Trump supporters.”

In fact, about 6,000 people attended the rally, in an arena with 19,000 capacity, leaving Trump shocked.

And furthermore, the photo obviously shows a crowd in Chicago.

Tulsa officials and others confirmed that protesters did not stop anyone from entering.

“We have several people who are part of our team that posts things,” said Tom Peterson, the Chair of the El Paso Republican Party. “I’ll look into it.”

Trump officials blamed the low turnout on the media.

Casper Stockham, who’s running against Democratic U.S. Rep. Ed Perlmutter, told the Chuck and Julie podcast this week that he knew the rally would be small when he checked into his Tulsa hotel and there was plenty of parking and rooms available.

Stockham did not say on air whether he planned to get a COVID-19 test after attending the Trump event–or if he was wearing a mask.